Concept art from THE MANDALORIAN Episode 1 Is Stunning - Nerdist

Concept art from THE MANDALORIAN Episode 1 Is Stunning

Disney+ has only been available for a week and as anticipated, fans cannot get enough of The Mandalorian. The series, starring Pedro Pascal as the titular bounty hunter, has captured the attention of the internet. Specifically, one character in particular has: Baby Yoda. Earlier this week, the official Star Wars Twitter account formally gave fans of the Disney+ series permission to speak publicly about the adorable asset now informally known as Baby Yoda. And it’s safe to say we cannot get enough. The subject of numerous cryptic tweets, Baby Yoda has full-on emerged as the best new internet meme.

The internet was already collectively swooning over every meme and gif of Baby Yoda when series creator Jon Favreau gave fans something new to fall in love with: Baby Yoda concept art.

While Baby Yoda has captured much of the attention from fans, they are emblematic of one of the most incredible aspects of the series: its imagery. The Mandalorian is a gorgeous series, full of colorful, vivid imagery that contributes to the authentic feel of the series, despite its setting on the outer rim of a galaxy far, far away. So it only makes sense that the concept art for the series is just as magical—if not more. 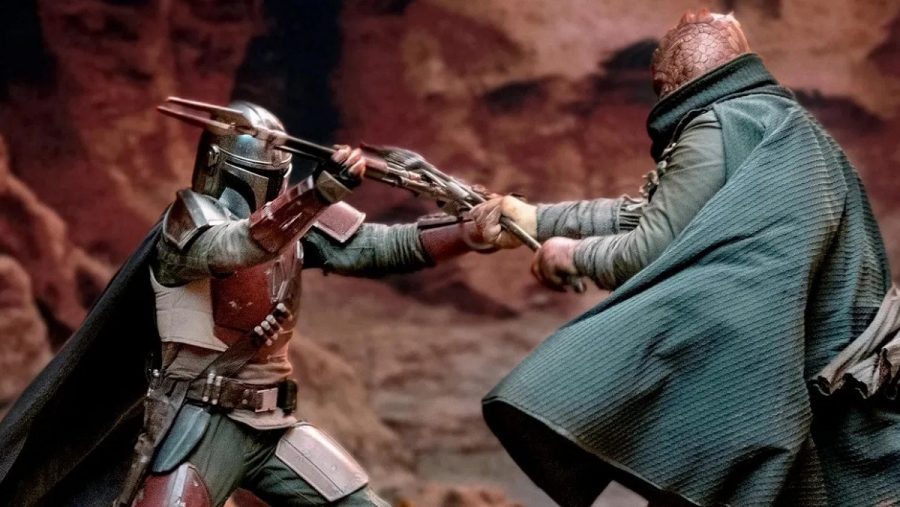 Just hours after Favreau gifted us with the Baby Yoda concept art, the official Star Wars Twitter account released the concept art from the first episode of the series. From the ten images provided, it’s easy to see how “Chapter One” and the world of The Mandalorian came together. As expected, the ten images are out of this world.

The first artistic rendering by Nick Gindraux features the titular Mandalorian and bounty droid IG-11 (voiced by Taika Waititi) during their battle to retrieve the asset.

Just like in the episode, the art illustrates how outnumbered by Nikto the bounty hunter pair are.

The next image, by Ryan Church & Nick Gindraux, mirrors one of the most iconic shots from the episode, as Mando and Baby Yoda reach out to one another.

While the final cut of the episode saw this scene happen inside Baby Yoda’s hideout, this artistic rendering still captures the moment out in the open, while IG-11 and Nikto fighters lie dead around them.

This concept art by Nick Gindraux is from early in the episode, as Mando weathers an icy territory to collect his bounty, an unlucky Mythrol.

This photo captures the gorgeous essence of the dangerous, isolated outpost.

Like in the episode, this scene instantly captures the Mandalorian’s intimidating, lone wolf persona.

This next rendering by Nick Gindraux depicts Mando and HG-11 during their uphill battle against the horde of Nikto fighters protecting Baby Yoda.

While their alliance wasn’t meant to last, it certainly had a great ten-minute run.

Up next, this still by Christian Alzmann sees Mando having finally tamed a Blurrg.

In the episode, the bounty hunter is attacked by a pair of Blurrgs, only to be saved by Kuiil (voiced by Nick Nolte), the ugnaught who teaches him how to tame the beasts.

This concept art by Jama Jurabaev captures the beginning of one of the most important alliances of the series thus far.

Kuiil’s decision to help the Mandalorian proves to be vital to his success (and survival) in the first two episodes.

The Mandalorian’s first major snag is depicted in this scene by Doug Chiang, as his Razor Crest is attacked.

Mando’s return to Greef Carga (Carl Weathers) is nearly derailed by the attack from this underwater beast. Luckily, Mando is able to zap it away and turn the Mythrol in.

This art by Christian Alzmann sees Kuiil taking Mando to the compound housing the then-mysterious asset, which can only be reached by Blurrgs.

During this scene in the episode, Kuiil reveals he’s not a fan of the uproar and violence over the asset but he’ll help Mando. Why? Because he has spoken.

Prior to the most unfortunate alliance uncoupling, Mando and IG-11 turn to face the Nikto in this rendering by Christian Alzmann

If their alliance wasn’t doomed from the start thanks to competing interests, this would be an iconic poster for a space-set buddy comedy.

While the Star Wars Twitter account has only released concept art from the first episode, we can only hope they’ll continue to release more art as the episodes are revealed.