An Artist Spent Over 700 Hours on This AVENGERS: ENDGAME Flipbook

It’s one of the most memorable third-act moments in recent movie history. We are talking, of course, about Avengers: Endgame. Thanos, on the cusp of eliminating half the population of the universe, has his Infinity Stones snatched from him by Iron Man. And then Tony Stark gets to turn t he Mad Titan and his minions to dust. Cue wild cheers from the moviegoing audience.

Now, via Geeks are Sexy, we’ve discovered one artist and YouTuber who spent over 700 hours creating a truly breathtaking “Iron Man vs. Thanos” tribute flipbook,  featuring some 1400 drawings. You can check out the entire amazing video from dP Art Drawing right here.

According to the artist’s official description, “This is the longest flipbook I’ve ever made. I drew over 1400 drawings to capture the most memorable Iron Man Vs. Thanos moments. There were the days I worked more than 10 hours and until 2:00​ in the morning every day. I planned to draw only 1000 drawings, but I was not satisfied so I drew 400 more drawings.” Another MCU flipbook showcases Black Panther, paying tribute to the late Chadwick Boseman.

Clearly, the artist is a big Marvel Cinematic Universe fan. They’ve also got a  video where they recreate Spider-Man’s tragic dusting from Avengers: Infinity War. Using pencil powder to draw Peter Parker, they are able to blow him away and recreate the now-iconic moment.” We can hear “I don’t wanna go Mr. Stark” just by looking at it. In fact, “I Don’t Wanna Go” is the actual name of this piece. Oh man, we are totally all choked up all over again. Even though we know Peter gets better later. 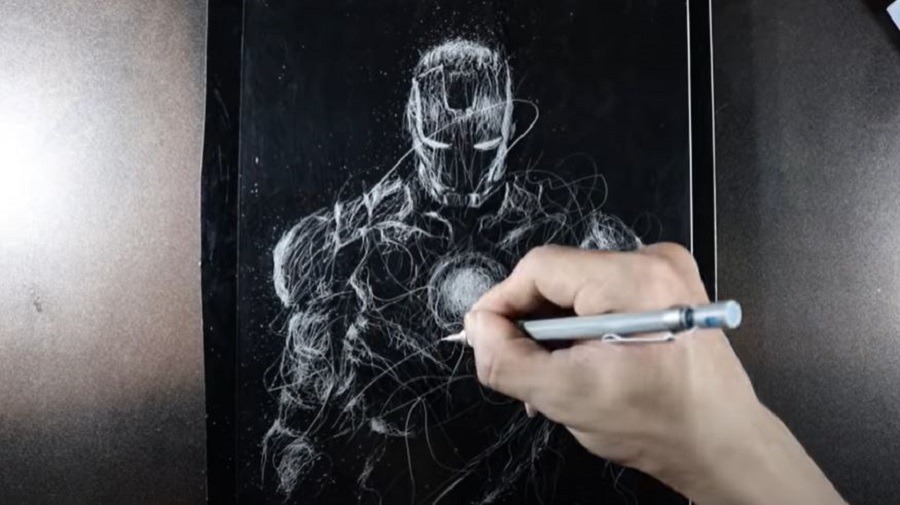 To see some other amazing pop culture-inspired drawings, ranging from Frozen to Star Wars to the Joker, head on over to dP Art Drawing’s YouTube channel for more.