Good things come to those who wait, and Artemis Fowl fans have been waiting for nearly two decades to see Eoin Colfer’s sci-fi/fantasy book series turned into a movie. Now, at long last, their wish is coming true when the Kenneth Branagh-directed film comes exclusively to Disney+ on June 12. The series follows the eponymous Artemis Fowl II, a 12-year-old boy genius and budding criminal mastermind whose efforts to restore his family’s fortune gets him embroiled in a hidden world of fairies, goblins, trolls, and all manner of mythical creatures.

Two years ago, I journeyed across the pond to Longcross Film Studios, located approximately an hour outside of London, where I spent a rainy afternoon on the set of Artemis Fowl. In addition to interviewing director Kenneth Branagh and the talented artisans who brought Haven City and Fowl Manor to life, we sat down with two of the film’s stars, Josh Gad (“Mulch Diggums”) and Nonso Anozie (“Butler”) to pick their brains about what to expect from the hotly anticipated feature film adaptation of Artemis Fowl. Here are seven of the wildest details we gleaned during our time in this magical world.

Despite his name, Butler isn’t some Fowl family servant tasked with cleaning the manor and serving Artemis fine foods; he is Alfred and Batman in one hulking package. With a shock of silvery hair and a muscular build, Nonso Anozie’s Butler stands in stark contrast to his diminutive ward, Artemis. According to Anozie, Butler is “in charge of their security, their wellbeing, and general running of the household.” As we’ve seen in the trailers, Butler can more than handle himself when the going gets tough. “Butler’s relationship to Artemis is that of a father figure, an authoritative keeper or guardian, I would say, someone who looks after him,” Anozie continued. “They can have a joke, but after, when it’s time to be serious, it’s time to be serious.”

While Anozie is excited for audiences to see the film’s epic action sequences, he’s grateful for his stunt double. “There’s this stunt where I get catapulted, shot out of a window, and I’ve done the first bit when I’m just about to hit the window, and the bit where I land, but then my stunt double is going to go through the window,” Anozie told us with a laugh.

They did some serious stunt training

Imagine enduring grueling training and performing demanding workouts for months on end for something that only lasts 15 seconds when all is said and done. Such is the life of an actor with an action sequence and that is especially true for Nonso Anozie in Artemis Fowl.

“We trained for quite a long period. I’m doing a lot of physical training, fitness training, and we trained for about a month and a half before we started shooting,” Anozie told us. “I don’t know if you saw a [kendo] fight? But there’s a [kendo] fight with Juliet Butler and I. It’s very much a tradition that we pass down through the generations, and she’s going to be the next Butler, so…I’m training her in self-defense and training her in martial arts. We had to train for that, for one scene, for like a millennia, to shoot something that only lasts 15 seconds [laughs], but that’s the level of dedication that everybody’s putting into this.” 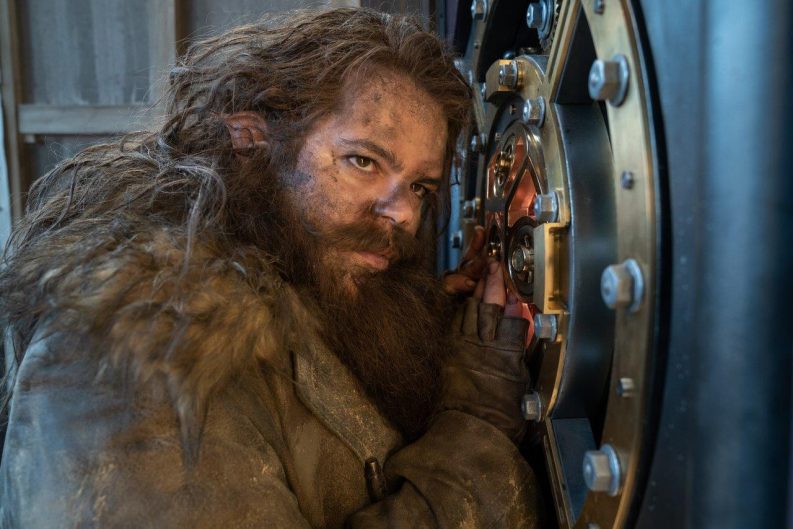 Josh Gad will serenade a troll

When Josh Gad isn’t busy reuniting the casts of Back to the Future and The Lord of the Rings, he can usually be found belting tunes in Broadway plays like The Book of Mormon and other Disney movies like Frozen and Beauty and the Beast. While Artemis Fowl is sadly not a musical, Gad will in fact show off his musical prowess in the film in a particularly silly sequence we watched in which he serenades a troll. One the day of our set visit, we heard Gad’s mellifluous tones singing a Foreigner tune because, according to Gad, it was the troll’s favorite.

“Yes, we had at one point ‘Despacito,’ which was a very different approach,” Gad explained when asked if they spitballed other songs for his character Mulch Diggums to sing. “Yesterday we did David Bowie’s ‘Starman.’ But it felt like the troll responded best to Foreigner, so that’s what we stuck with. What a weird first scene for you guys.”

While the idea of singing to a troll wasn’t Gad’s idea, he is responsible for incorporating a decidedly more modern tune into the mix. “Well, initially they had ‘Hush Little Baby’ in the script and it felt a little unspecific,” Gad told us. “And I started spitballing ideas with the writer…There’s this common refrain in the movie, where beings like Holly and Mulch listen to contraband human music. Which I thought is such a fun little detail, because you’re not allowed to listen to human music in the fairy world. And so, the idea that we see Mulch listening to human music in Haven City at the beginning. And then carry that into this, and singing such a specific song to calm and relax a troll, just made me laugh so hard. Because it’s so absurd. That you have this giant beast and the one thing he’ll respond to are the beautiful lyrics of this song.” 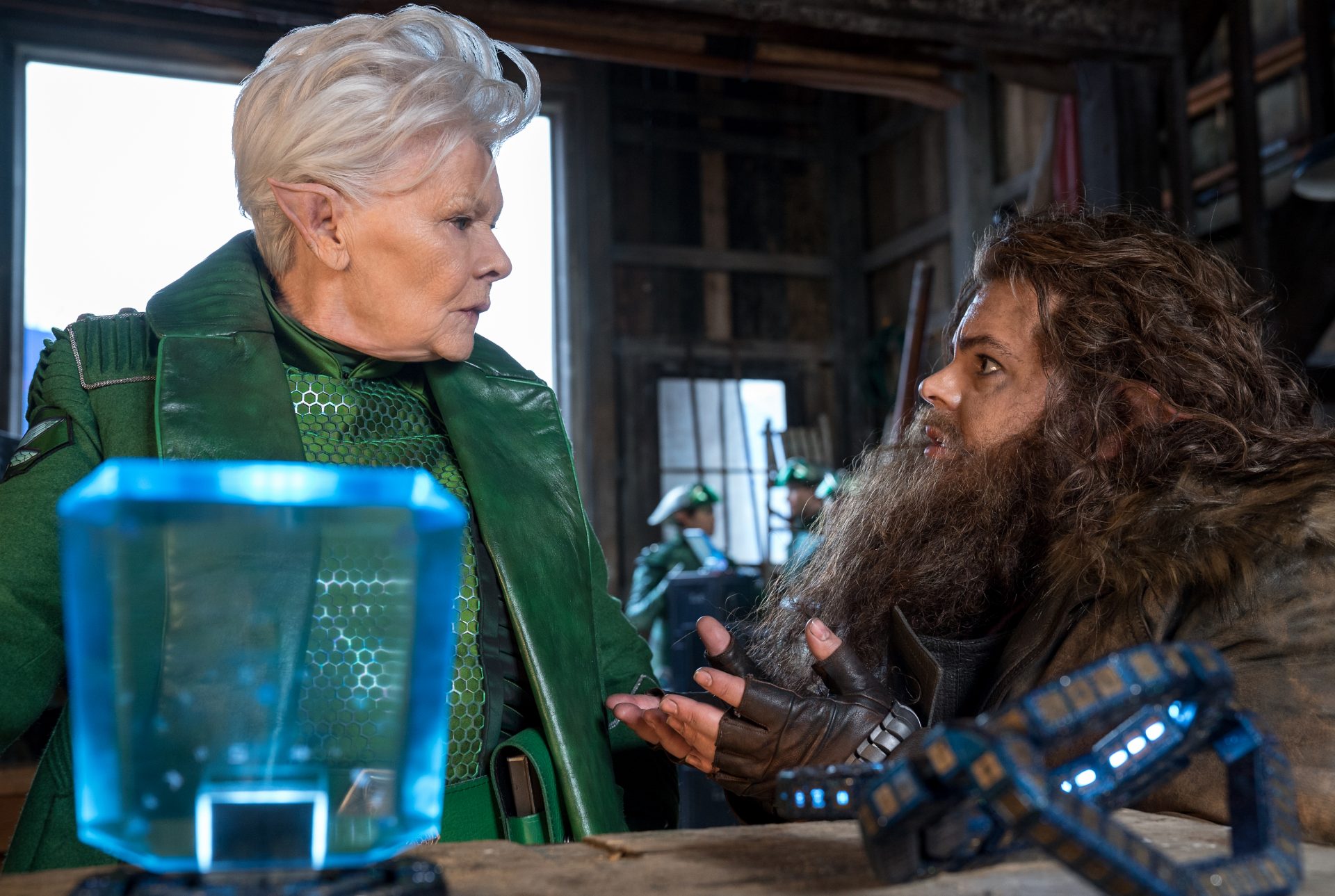 Transforming into the kleptomaniacal dwarf Mulch Diggums isn’t as simple as putting on a costume for Josh Gad. The actor has to don extensive prosthetics, including a massive jaw attachment to facilitate the way the dwarven character lives up to his surname by tunneling underground. If you’re raising an eyebrow as to why Gad would need a giant jaw prosthetic for a task like that, well, then you’re going to be in for a surprise when you learn how Mulch digs. He does so by eating the dirt and then excreting it. Yes, you read that right.

“Oh, that giant jaw… it reminds me of Beetlejuice,” Gad mused. “No, it’s great. Definitely not something I’m going to show my kids for a little while because, [in falsetto] ‘Daddy what’s going on?’ But it’s pretty amazing. That effect is going to be incredible.”

But the jaw prosthetic is only a part of the process of becoming Mulch Diggums. For Gad, transforming into his character is an hours-long process from start to finish. “I have a lot of leather and hair on my body,” Gad explained. “There’s actually hair… You guys can see. There’s hair inside of my [ears]. So it’s a process. Every day it’s a two-hour process to get into this. And a one-hour process to get out of this. And a half-an-hour process of crying myself to sleep, reminding myself that I have to do it again tomorrow.” 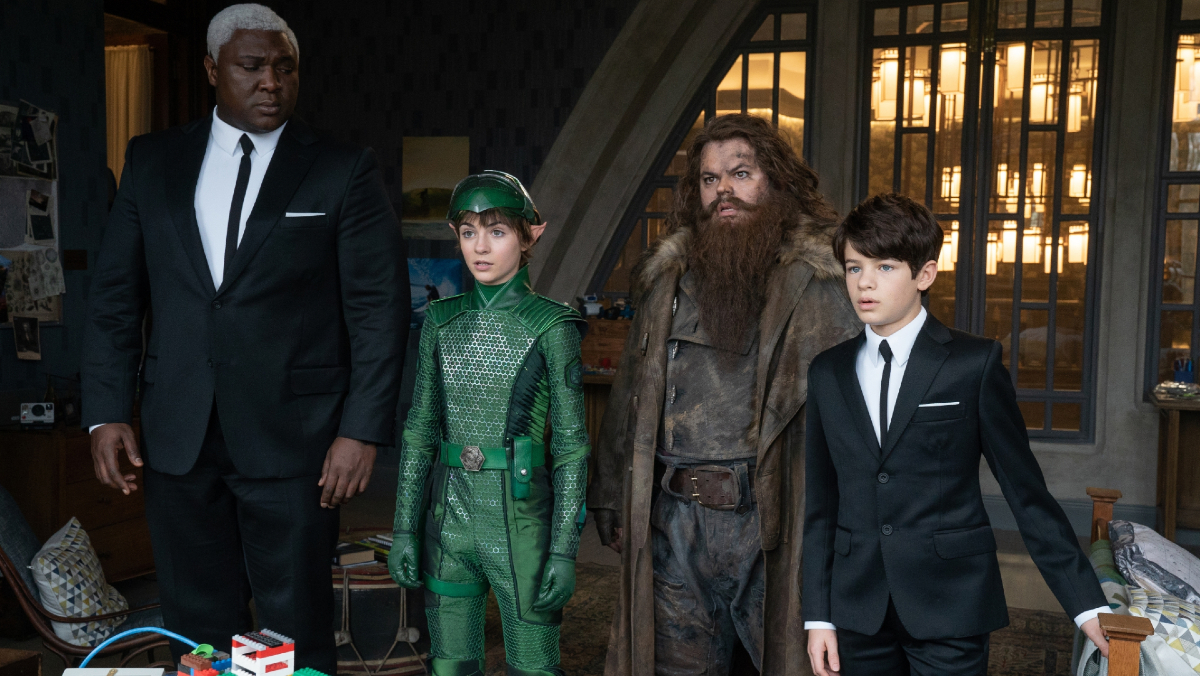 Artemis Fowl first came out in 2001 during the height of the Harry Potter craze. Given that it was a YA novel by an author from across the pond involving a precocious young man and all sorts of fantasy creatures, the comparisons between the two were inevitable. But those expecting it to be the exact same thing are in for a surprise, according to Josh Gad.

“I’m obsessed with Harry Potter,” Gad told us. “I grew up with the books, I grew up with the movies. There hasn’t been a Harry Potter in a long time. A new Harry Potter. This feels like the answer to that. I can’t tell you how many people come up to me, who tell me how important the Artemis Fowl books were to them as a kid. In many ways, I think Artemis is almost the antithesis to Harry. Whereas Harry is an empty vessel who’s going on this journey of discovery. And there’s an innocence that along the way becomes a little bit darkened by his experiences. Artemis starts almost at the end of Harry’s journey. And Artemis is wise beyond his years, doesn’t have the magical abilities of Harry. So he has to compensate for it with an intellect that allows him to tap into magic. And at the same time, he’s very manipulative. And he uses that manipulation in order to amass this incredible plot. The writer once described this book as, ‘Die Hard with fairies.’ Well, the Alan Rickman character, [Hans Gruber], in many ways, is Artemis Fowl himself.”