7 ARTEMIS FOWL Facts We Learned on the Film's Set - Nerdist

7 ARTEMIS FOWL Facts We Learned on the Film’s Set

Nineteen years after it first hit bookstore shelves, Eoin Colfer’s sci-fi/fantasy saga Artemis Fowl is finally hitting theaters. Or at least, it was supposed to before the COVID-19 pandemic made seeing movies on the big screen feel like a distant memory. Much like the denizens of Fowl Manor, the long-gestating Artemis Fowl movie has been seemingly dislodged from time itself, sliding into that entropic Hollywood state of “development hell” for nearly two decades. Nevertheless, at long last, Artemis Fowl will make its triumphant debut on June 12, exclusively on the Disney+ streaming service.

Two years ago (!), I was fortunate enough to spend a rainy afternoon on the set of Artemis Fowl at Longcross Film Studios, located roughly an hour outside of London. In addition to interviewing director Kenneth Branagh—whose insights we shared last year—we spent the day exploring Haven City, Fowl Manor, and all manner of workshops where we spoke with the talented artisans and craftspeople who brought Eoin Colfer’s vision to life. Here are seven of the wildest details we gleaned during our time in this magical world. 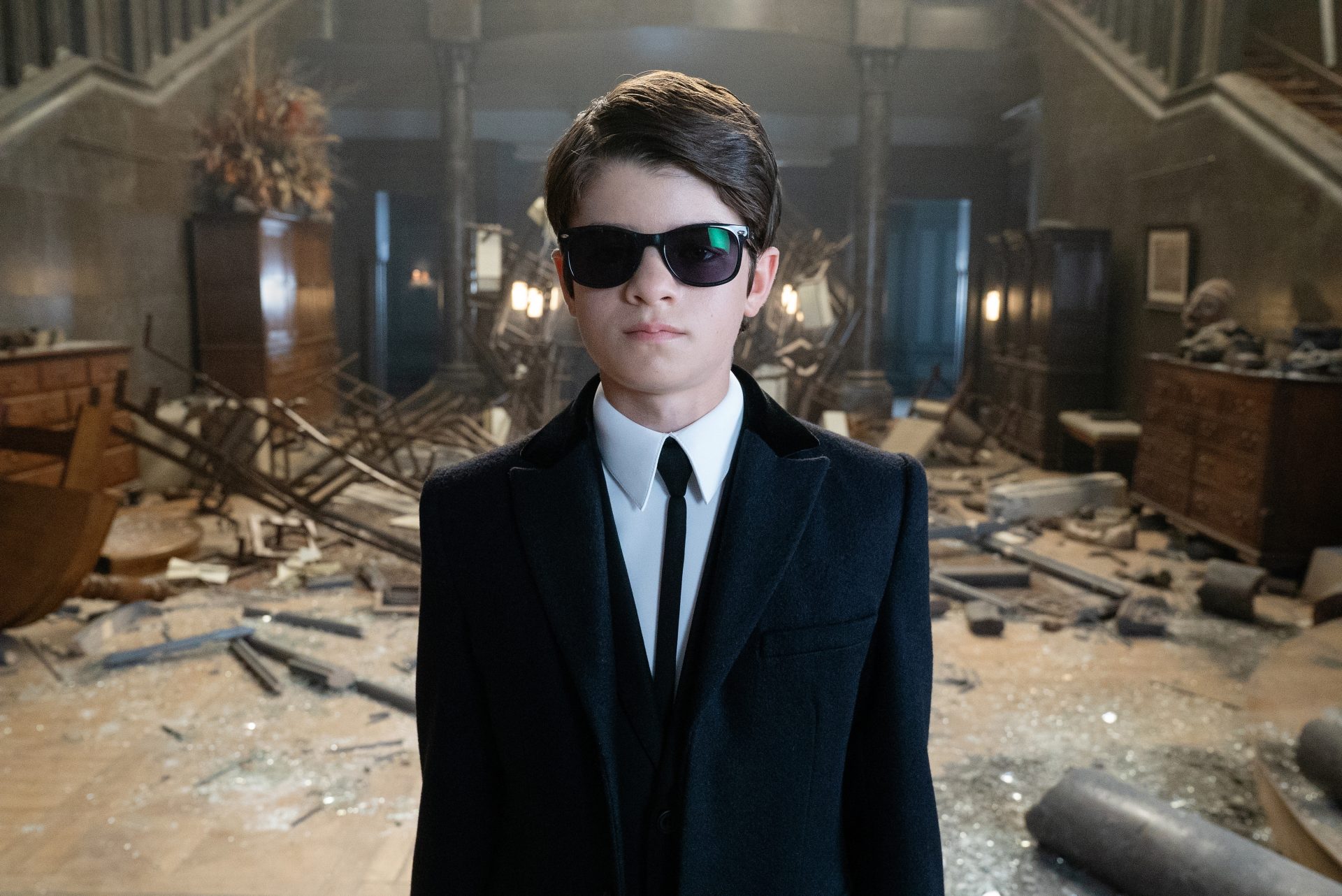 They built Fowl Manor from the ground up

The first Artemis Fowl novel has been described as “Die Hard with fairies.” The stand-in for Nakatomi Plaza is Fowl Manor, the ancestral home of Artemis Fowl’s family. However, in order to bring this iconic location to life, they couldn’t depend on simply finding a comparable house in the real world; they had to build it themselves, according to production designer Jim Clay.

“We originally looked at locations,” Clay said. “We scoured around Ireland, we scoured around parts of Europe, and obviously the U.K. It was apparent very quickly that the action we had to carry out and the damage we had to do to the house once the troll [enters]. When a 50-foot troll enters your house there’s going to be a bit of collateral damage. We were going to build it fairly obviously. Traditionally we would build the exterior with the interior on a stage.”

However, that wasn’t an option for Fowl Manor, which the filmmakers and the studio hope will be the beginning of a long-running film franchise to match its source material. 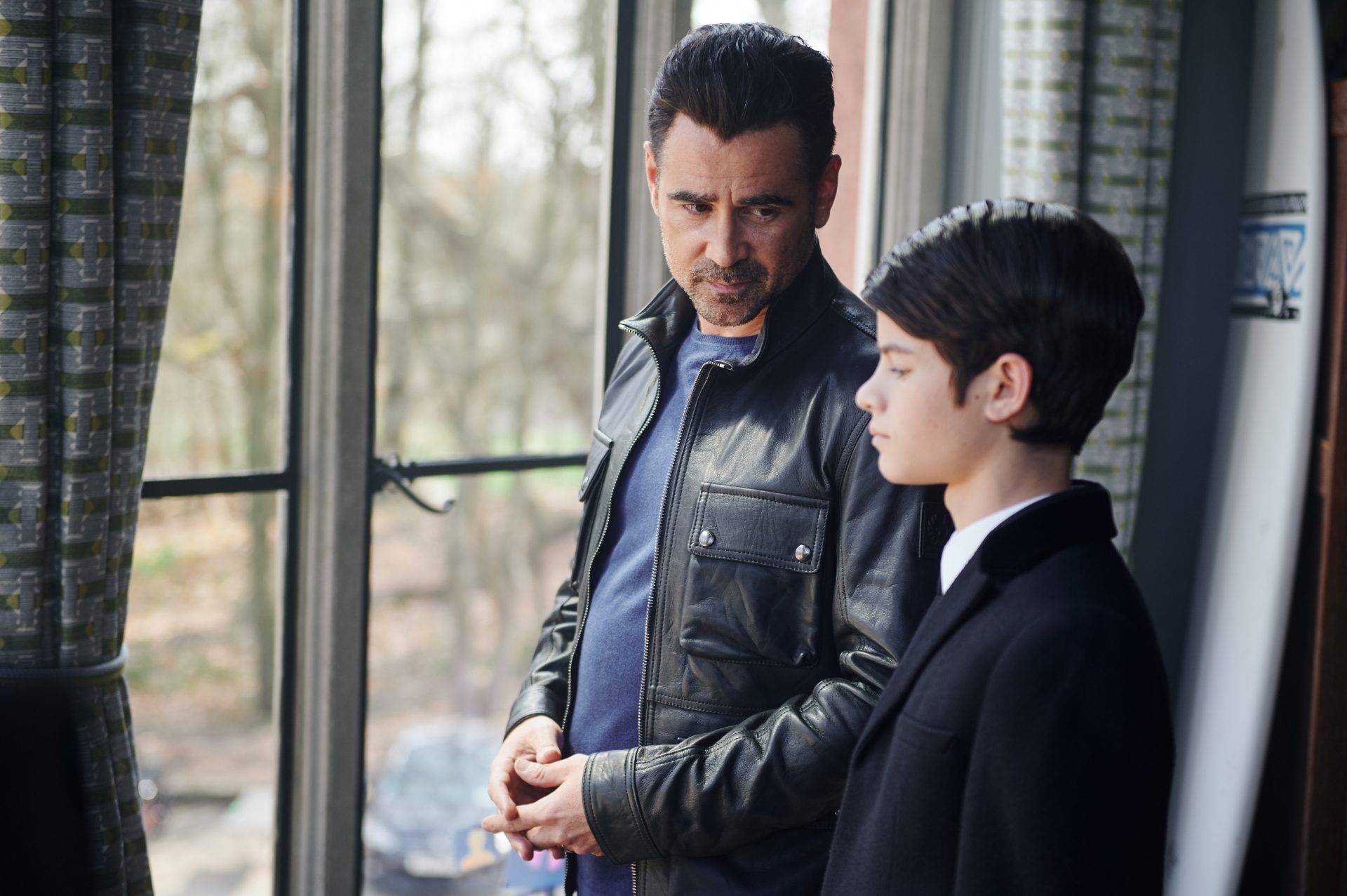 You can tell a lot about someone by looking at what they have in their bedroom, and that goes doubly so for a precocious child, whether they’re a criminal mastermind or not. In Artemis’ case, his room in Fowl Manor speaks to his innate curiosity, astounding intellect, and predilection towards high-tech tinkering.

“Artemis’ room [gives] again the feeling that the house has been in the family for years, and so they are a family of collectors of things and so, [it contains] butterflies, moths from previous generations,” explained set decorator Celia Bobak.

In addition, Artemis has a collection of LEGO bricks, a Raspberry Pi computer kit, “and lots of things bought from the science museum,” Bobak added. “They are trying to make this room imaginative and something that would catch the imagination of the young audience, something that will really amuse them and so we got a lovely old train set up there with tunnels, which is just a nod to Ken. Then I found this amazing auto man, which was also broken and I’ve had it rebuilt by amazing prop makers and it’s the light source, like a chandelier but it has a little boy up there. He’s dressed in Donegal tweed because we’re in Ireland. He’s a ’30s French mannequin boy and he’s on this magnificent flying machine, which he actually cycles when it’s turned on, and you have the lights and everything else. And I decided, you cannot possibly not have a pair of skis and a box on the back with your things in it. And the Irish flag, so we needed that.”

Suffice to say, the devil is in the details, and there will be plenty of details for diehard fans to uncover. Just don’t expect another famous fantasy novel to make an appearance.

“Any Harry Potter books on the shelves?” one reporter asked. “Mmm, no I don’t think so,” Bobak replied matter-of-factly. 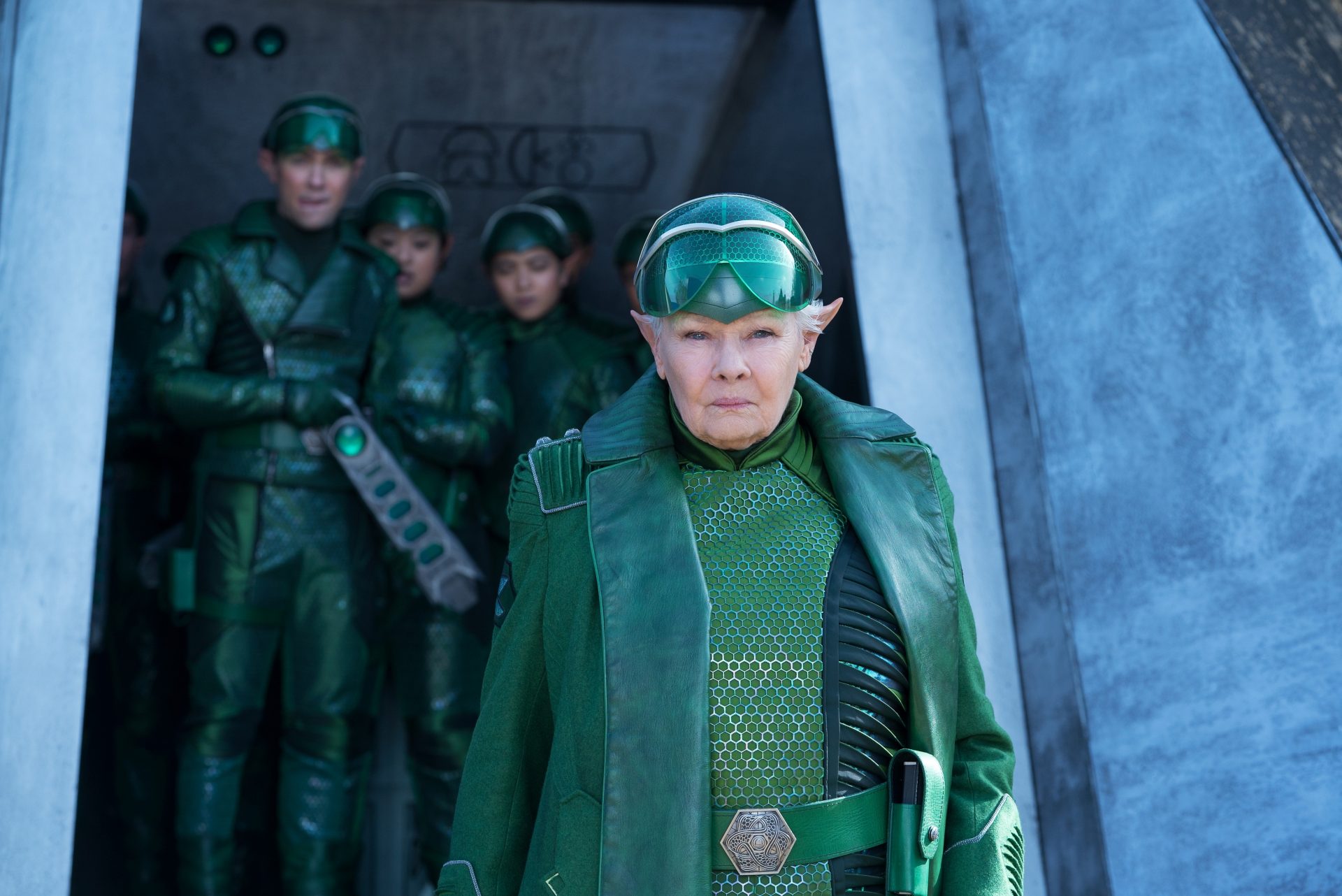 The LEPrecon costumes are insanely detailed

When it comes to bringing the fairies of Artemis Fowl to life, costume designer Sammy Sheldon Differ and her team went absolutely ham, combing through the book for inspiration, as well as looking to the natural world to give the officers of the Lower Elements Police a techno-organic feel.

“[The LEP] had to have a uniform, and we didn’t want them to look like they have a superhero uniform as such.” Differ said. “So we didn’t want to get into Spandex or into too military. I wanted it to try and fall somewhere in the middle and pull all the organic things that we were researching into… We all were using this juxtaposition of nature and geometry. So, the sacred geometry that comes from the fairy world and the natural geometry that we were researching within nature. We tried to pull it all together.”

That collision of mystical and natural can be seen in the textures of the costumes, which you can see in the photograph above. “We also looked at insects and then the bioluminescence of fish and other creatures in the sea and the iridescence of small insects and how to use that,” Differ revealed.

She continued, “And there’s a line in the first book that says that the LEP had a mesh over their uniform to protect them from the heat and the cold and stuff when they were flying. So, that was a key element in our development of these. They had to have a mesh and we researched into whether we could have it lighting up and that entailed batteries and wires, and it was tricky. So we decided that we would spend quite a bit of time, probably five months developing this print, which is basically a hex. What I wanted was to convey an iridescence, but also when you move around the body, they look green. So the print itself is a layered print of about… I think it’s 17 layers or something… built up. So we get a slightly three-dimensional field and an iridescence. So we’ve got a light-up suit without it having any batteries.”

In order to balance the mystical nature of fairies with the high-tech trappings of the Lower Elements Police force’s reconnaissance unit (LEPrecon for short), costume designer Sammy Sheldon Differ drew inspiration from unlikely sources: insects and the International Space Station.

“A big challenge was how to design the wings for this, because they had to be mechanical,” Differ said. “They have to be carry-able. We have to be able to put them on their backs. And so we looked at the ladybird and how a ladybird holds its wings, which is very different than many other insects. And so these are inspired originally by ladybird.”

“This is absolutely nothing to do with me, but what I can say on her behalf, [Sammy Sheldon Differ] tried to to work out how something so delicate, so beautiful, and practical could be so small,” added props master Barry Gibbs. “So I know she started to look into variations of origami patterns, and also she started to look into NASA and look at how the solar panels work on the International Space Station.”

“We looked at NASA, how they open their solar panels in space, and other things that,” Differ added. “The challenge was to try and create something that was big enough to carry a person when it’s opened, but small enough to fit inside the backpack that isn’t too big. So that’s why they relate to each other, in that… There’s a bit of magic involved as well, actually.” 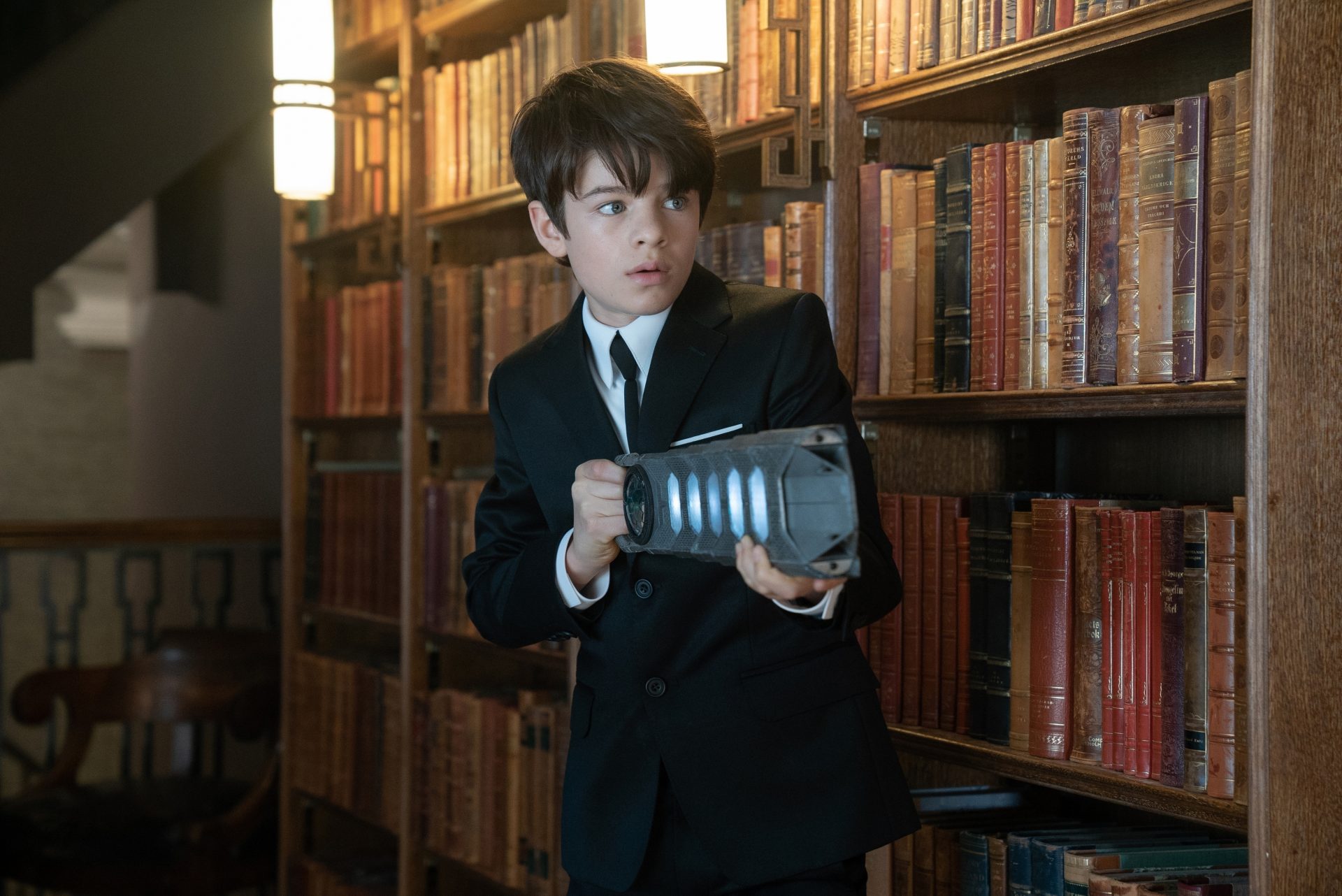 The weapons have been radically reimagined

In the world of Artemis Fowl, high-tech weapons are par for the course, but don’t expect them to look exactly like you might have imagined in the books. For this version of Artemis Fowl, the filmmakers and designers wanted to give the appearance of highly advanced weaponry without giving off the appearance of something like guns and firearms. Case in point, the Neutrino guns, which in books are powered by nuclear batteries and fire punishing laser blasts.

“We’ve steered away from that, and we’ve also tried to be really careful in not having things as guns,” Gibbs revealed. “So we wanted devices or weapons, but having a little bit more fun to it, and make it, in a way, a little bit more simplistic. They’re complex but simple, in the way that they don’t fire ballistic rounds. They don’t fire anything that you see as being harmful. There’s no explosions, as such, at present.”

That said, Gibbs teased everything from katanas to bows and arrows, so the LEPrecon officers are going to come prepared when they lay siege to Fowl Manor. 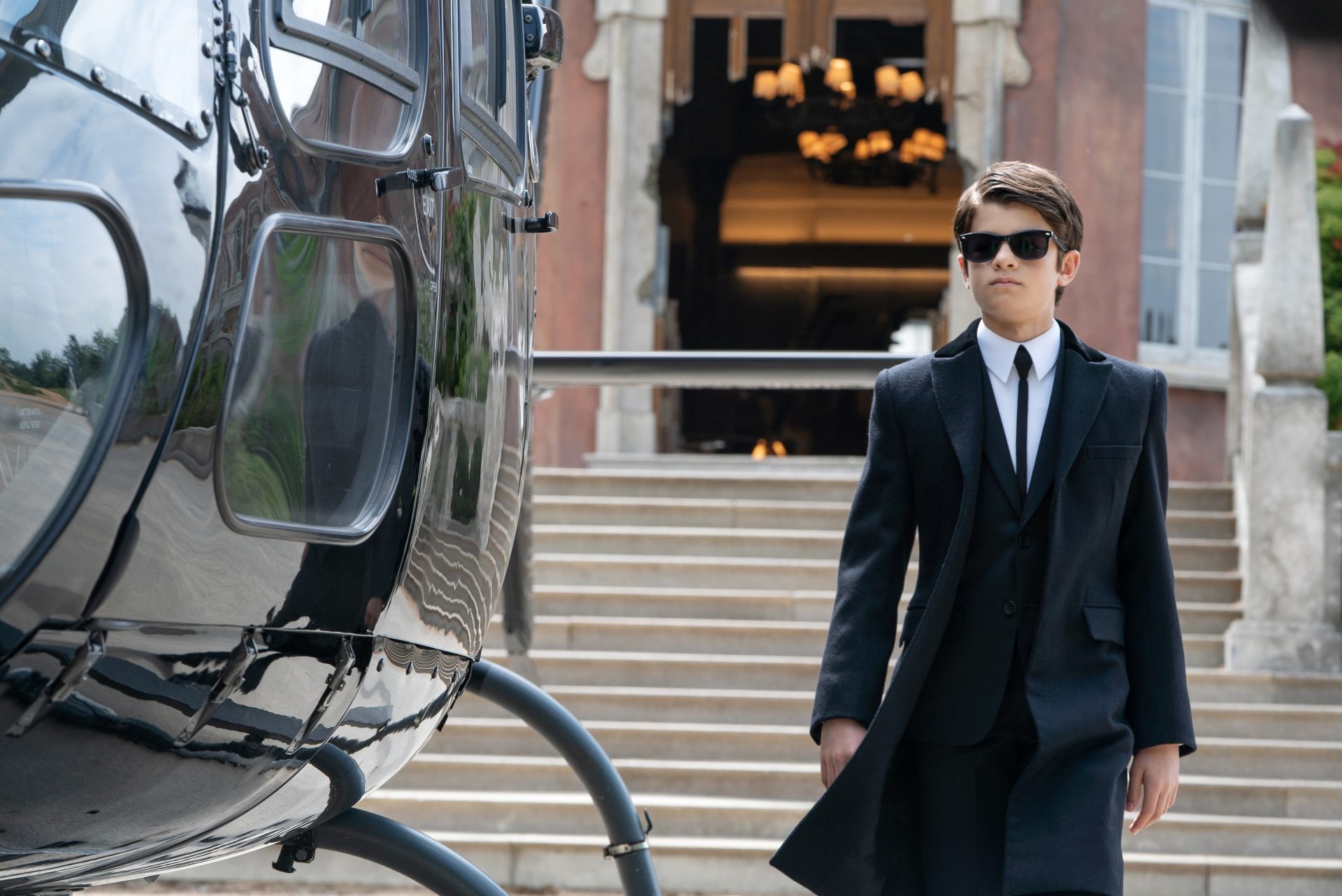 While most big-budget sci-fi and fantasy films tend to rely heavily on green-screen and CGI to accomplish their larger-than-life goals, Artemis Fowl is doing things the old-fashioned way: practically. That isn’t to say that visual effects won’t play a major part in the finished product, but among the staggering physical props that Barry Gibbs and his team of artisans had to make was a massive catapult capable of launching a gigantic troll at Fowl Manor.

“We’ve had to build this huge catapult, which fires a troll at the house,” Gibbs told us. “And the challenge is the scale of it. Because we’ve got a troll that’s three-and-a-half, four meters high. Then we’ve got to try and think of a device that restrains and fires him into a house. So special effects made this steel structure, which we then had to turn into something. If you see it, you’re looking at it like, “That’s not a catapult, it’s more like a plane,” because it’s got a part that resembles a crossbow attached to it. And then it looks like a tail. So that’s been a challenge. Time is the challenge. The fun side is making it.” 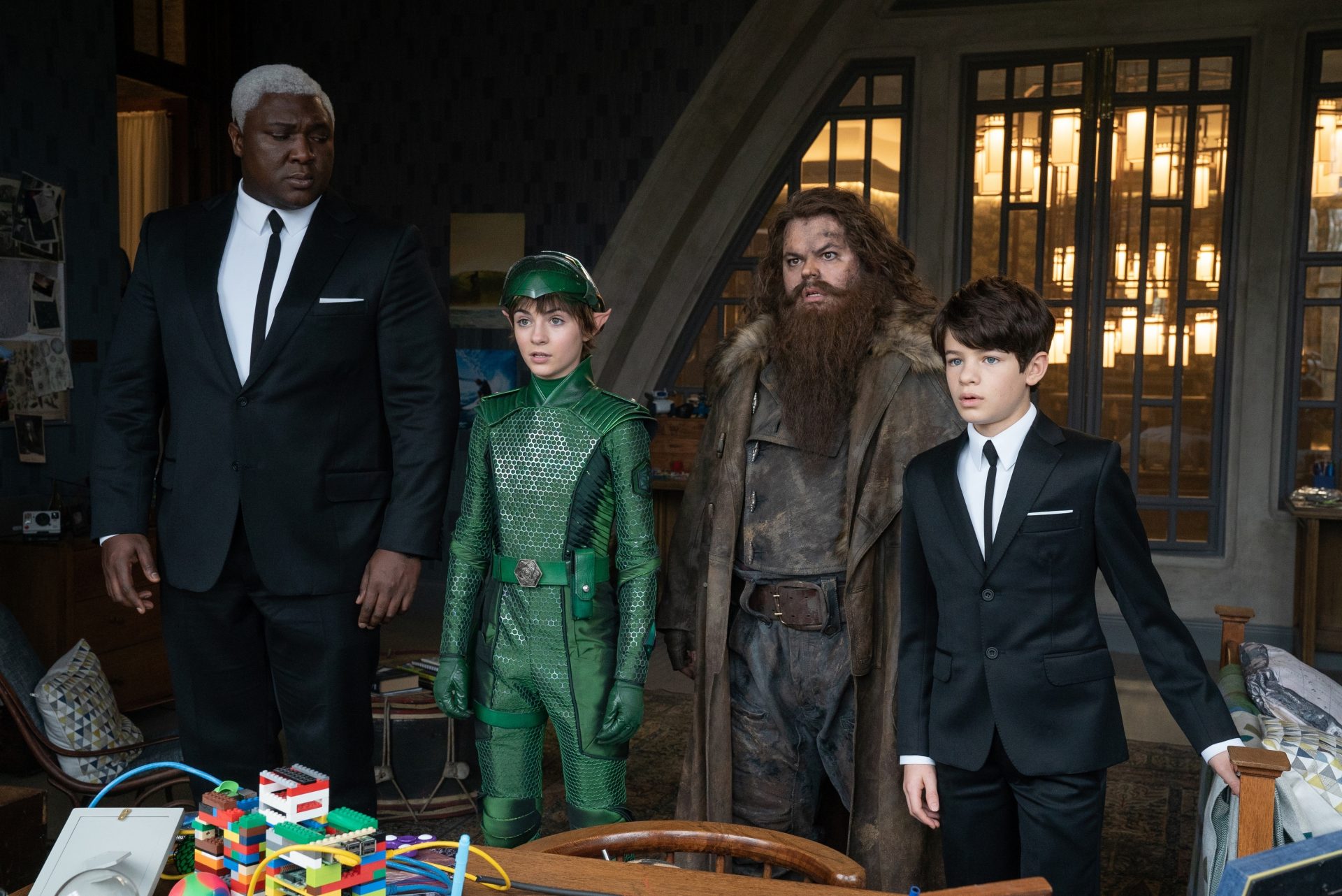 Sorry, folks, but Josh Gad‘s butt will remain tastefully out of frame. I know that the number one question on book readers minds concerning Gad’s character, the kleptomaniac dwarf Mulch Diggums, centers on the unorthodox manner in which he digs holes, but when it comes to staying true to the source material, there will be no butts about it.

“So, the bum flap [on Mulch Diggums’ costume]. Because of the process by which Mulch digs, do we see at all his butt?” asked one intrepid reporter on set.

Artemis Fowl will premiere on June 12 on Disney+.