It hasn’t even been two months since Infinity War was released in theaters, but even a universe-halving finger snap isn’t enough to slow Marvel down. The  MCU‘s next entry,  Ant-Man and the Wasp, comes to theaters on July 6 in the form of a much smaller—both literally and figuratively—installment in the franchise. Since the first reviews of the film hit the ‘net today, we’ve got an idea of what we can expect from the first film to follow the third Avengers epic.

Based on a roundup of some of our favorite reviews, which universally praised the movie’s humor, action, and first Marvel headlining titular superhero, how much you enjoy the film might depend on how much you are looking forward to a much more intimate, lighthearted entry after watching all your favorite heroes disappear in a cloud of dust. Take a look!Molly Freeman at Screen Rant says the film is a heartfelt sequel with plenty of humor that is better than the original thanks to Evangeline Lilly’s increased importance.

“Marvel Studios creatives emphasized Wasp’s status as the first female superhero to co-headline an MCU movie, and Ant-Man and the Wasp doesn’t disappoint, with Hope getting (at least) an equal number of action scenes as Scott. The dynamic between the two also helps balance the film’s comedy, with them on equal footing and Hope acting as the straight man to Scott’s more comical antics. And, with the additional features on her suit – the wings and blasters – Wasp is able to provide more dynamic action than Ant-Man, which helps to elevate the sequel’s set pieces above what viewers saw in Ant-Man. Plus, Hope is at the center of the emotional arc of the movie, since it’s a rescue mission for her mother, and Lilly is able to carry off that dramatic storyline as well as the action portions of the sequel. Altogether, the film effectively establishes Wasp as another major superhero within the MCU, and the film is all the better for it.” At Rolling Stone, Peter Travers thought some of the family elements of the story slowed the mostly successful movie down at times, but its two stars are why Marvel’s smallest entry shines.

“But the thrill of the film is watching Ant-Man and the Wasp team up and raise hell together. Rudd is a winning combination of sass and sincerity. And it’s a kick to watch Lilly break out and let her star shine. She hasn’t had a part this juicy since she played Kate Austen on Lost; her smarts and screen presence lift the movie over its rough spots.”

Caroline Siede from Consequence of Sound writes that the sequel feels less like a movie and more like a very enjoyable episode of television.

“Thankfully, Ant-Man and the Wasp never forgets that it’s one of the comedic pillars of the MCU, and it keeps the jokes flying fast and free. Rudd is the only credited screenwriter to work on both Ant-Man films, and even more so than in the first installment, Ant-Man and the Wasp roots its comedy in the goofy good-heartedness that has long been his signature. While its characters are sometimes in conflict, there’s very little of the sniping and sarcasm that defines MCU franchises like Iron Man and Guardians of the Galaxy. For the most part, the characters in Ant-Man and the Wasp are friends, family, or friends who treat each other like family…” One critic who was underwhelmed by the movie was David Crow at Den of Geek, who found it to be a run-of-the-mill sequel.

“As the latest superhero product, Ant-Man and the Wasp is serviceably innocuous. Unlike so many other films about masked do-gooders, and more than a handful of 2018’s would-be blockbusters, Ant-Man and the Wasp is still built from an assembly line that understands story structure and character motivation better than most frazzled conference room strategy sessions in Tinseltown. The basic necessities of narrative momentum are all given the requisite focus and care that in better properties can occasionally produce exceptional Marvel entertainments. However, in the case of both Ant-Man films, and more damnably the sequel, words like “basic” and “requisite” are always the ceiling.”

Eric Kohn at IndieWire thought it had some issues and was not very ambitious, but still thinks audiences will be entertained by it, especially after Infinity War.

“No matter its uneven variables, Ant-Man and the Wasp remains satisfying in that slick, crowdpleasing sort of way that became Marvel’s hallmark, at least until the shocking finale of Infinity War. That movie upended years of formula with a grim cliffhanger that left audiences reeling. Released just a few weeks later, Ant-Man and the Wasp”practically feels like a mea culpa, or at least the opportunity to take a breath. At this point, no studio does a better job of giving the people what they want.” 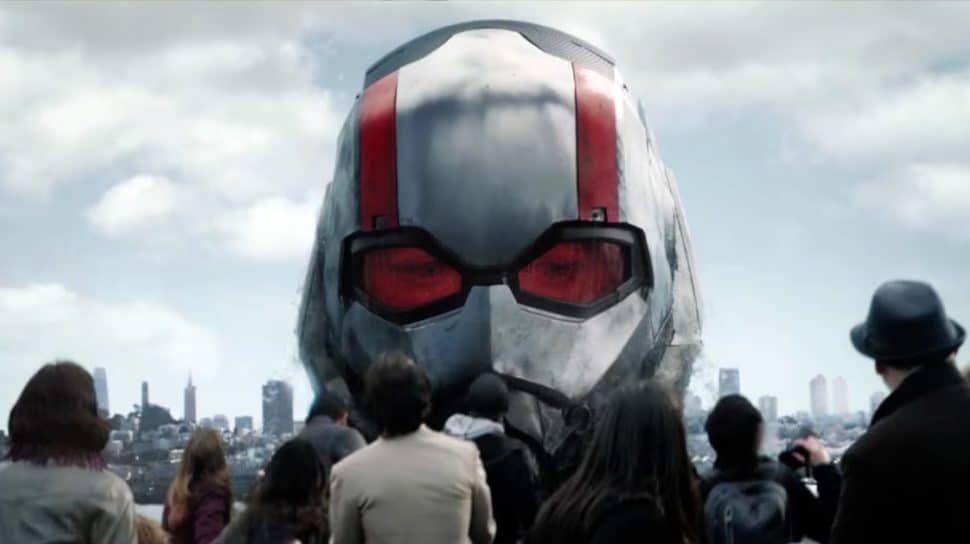 Josh Spiegel at SlashFilm had praise for Evangeline Lilly as well as Walton Goggins’ villain in a film he says thankfully isn’t as stressful as the MCU’s last.

“The stakes in Ant-Man and the Wasp are exceedingly low, a welcome contrast to Infinity War as well as many other MCU movies. What’s more, the tone is even looser than that of the original film; to wit, at one point, Scott and Hope desperately try to…procure a chintzy trophy from his daughter’s backpack at elementary school. That’s the level at which most of the film operates: the characters’ lives are in peril, but in cheerfully ridiculous fashion. With Peyton Reed returning as director, Ant-Man and the Wasp is consistently light and moderately funnier. The script — credited to five writers, including Rudd — thankfully introduces a lot of new humor, while judiciously bringing back the uproarious running gag in which Scott’s ex-con pal Luis (Michael Pena) recounts past stories in a meandering but fast-paced fashion.”

The L.A. Times‘ Justin Chang was happy to enjoy a superhero movie that was trying to bring things down a size from typical action films.

“It’s nice, for a change, to see a superhero movie in which a big building doesn’t blow up. Even nicer to discover that, with the help of a handy remote control, the building can suddenly shrink to the size of a suitcase, small enough to tuck away in the overhead compartment. Ant-Man and the Wasp, for its part, proves just as winningly compactible. Its zippy action scenes and trippy bursts of kaleidoscopic color look great in a theater, but in some ways its whimsical sensibility and playful, diverting story might feel just as well suited to the dimensions of your in-flight entertainment screen.” At Empire, Dan Jolin liked the film, but says it suffers from directly following much more ambitious and important films in the franchise.

“But as massive as Scott grows — or as wibbly as things get in the mercurial jellybean hurricane that is the Quantum Realm — the film still feels comparatively minor and light-hitting. There’s no getting away from the fact that Ant-Man And The Wasp, as fun as it is, lacks the sheer, mind-blowing heft of Infinity War. Or, for that matter, the scope and thematic muscle of Black Panther. Or the all-the-way-out-there, inventive deliriousness of Thor: Ragnarok. In this new era of Marvel over-achievement, it really does feel like a lesser work.”

“Ant-Man and the Wasp (and the title is accurate, both heroes get about the same amount of action time) is about as “stand alone” as an MCU movie can be these days (at least until one of the two post-credit scenes). Which goes back to my initial point: even in the context of the MCU, this movie is not here to make a viewer stress out, or really feel anything but “good.” And I also want to be clear, this isn’t “dumb fun where you can turn your brain off.” Your brain will very much be working because Ant-Man and the Wasp is a very clever movie. It’s just your brain will be working in a refreshing way for a couple of hours.” And of course, we encourage you to check out our own Kyle Anderson’s review of the film!

Even though it feels like Infinity War came out a long time ago, we’re still stressed from how it ended, so we’ll take smaller, happier, and less nerve-wracking. (Until we get to the post-credits scene.)

What do you think? Are you more excited to see the movie after reading these reviews? Tell us why in the comments below.