ANT-MAN AND THE WASP Is a Fun, Light Palate Cleanser (Review) - Nerdist

ANT-MAN AND THE WASP Is a Fun, Light Palate Cleanser (Review)

With Avengers: Infinity War still making a bajillion dollars, not to mention Black Panther raking it in both in theatrical and home media release, there was every possibility the public would have the dreaded and oft-touted “Marvel Fatigue.” Nobody seems more wary of that than Marvel themselves, who have purposely given us the lightest, most humorous movie possible after the universal gut punch of Thanos’ gauntlet snap. Director Peyton Reed has bestowed upon a weary public the relatively small (get it?) but perfectly enjoyable Ant-Man and the Wasp, a reminder that superhero movies don’t need portent all the time.

The characters of the Ant-Man franchise seem purposely distant from much of the MCU, and most of the conflict in Ant-Man and the Wasp comes from the fallout of Scott Lang (Paul Rudd) taking part in the big ol’ airport battle in Captain America: Civil War. We pick up two years after that, and he’s taken a plea deal of house arrest, and the threat of 20 years in prison if he speaks to Dr. Hank Pym (Michael Douglas) or Hope Van Dyne (Evangeline Lilly) again. Naturally, the movie wouldn’t go forward if he actually adhered to these rules, and the threat of incarceration is one of the movie’s ticking clock elements. While the first Ant-Man was very proudly a heist film, the second is more of a chase, with several groups all vying for possession to Hank Pym’s shrinkable laboratory (conveniently in carry-on luggage mode when shrunk). Hank and Hope need Scott’s connection to the quantum realm to try to release the long-lost Janet Van Dyne (Michelle Pfeiffer), the first Wasp, after 30 years; for this, Hank will begrudgingly seek help from his former partner at S.H.I.E.L.D. Meanwhile, a shady black market tech dealer (Walton Goggins at his Walton Gogginsiest) wants Pym’s tech to sell to the highest bidder, and the mysterious quantum-phasing Ghost (Hannah John-Kamen) wants the tech for some unknown but also fairly dire reason.

So it’s a race against time for Scott, a race against time for Ghost, and a race against time for Janet lest she be lost forever. Reed keeps the action moving incredibly swiftly, and save a few lovely scenes with Scott and his daughter Cassie (Abby Ryder Fortson), every other bit of character development comes during or in the middle of furthering the plot. Within that, there are plenty of great laughs–many coming because the Ant-Man suit’s size regulator is continually on the fritz–and some sweet moments of reflection for everyone involved. The action is frenetic and fairly constant, with Wasp the clear ultimate badass character we hoped she’d be in the suit. Everything in the movie is perfectly fine, but there isn’t a ton of variation. This movie doesn’t have the big, standout action setpiece, and even the film’s climactic car chase through the streets of San Francisco seems like the middle action sequence of most other Marvel movies. This isn’t a complaint, exactly, but it lacks a certain degree of rising and falling action; everything is sort of at the same pitch. Following the dramatic heft of Infinity War, however, this is a breath of fresh air, reminding us that even within the MCU, there are different levels of superheroics.

Rudd and Lilly are a winning pair, and Michael Peña nearly steals the show again as Scott’s fast-talking ex-con partner Luis. I’d say if anyone is under-served in the movie it’s John-Kamen as Ghost, a character who is mysterious and serious out of necessity. She falls somewhere in the Ronan the Accuser category, while certainly having a much more sympathetic motivation. 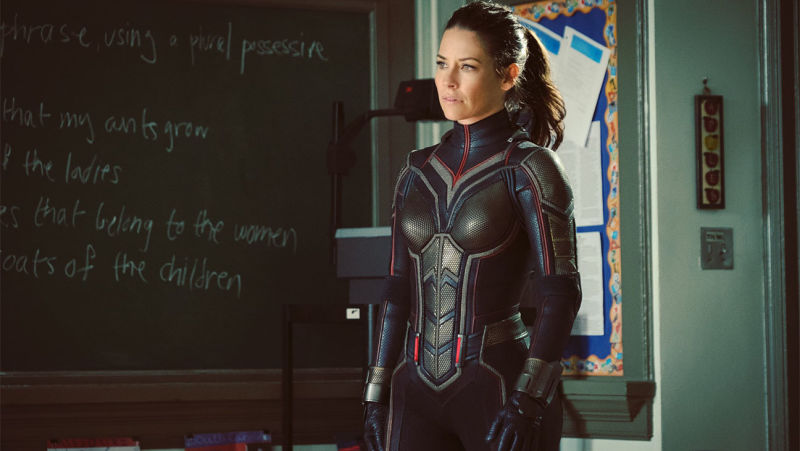 Ultimately, Ant-Man and the Wasp is a lovely palate cleanser of a superhero movie; light, humorous, exciting enough, and a great way to spend your July 4th weekend. Inconsequential, but damn, is it fun.