The streaming-content-platform game has added yet another company to its roundup of competitors. No, we’re not talking about Disney+ (which has roughly ten bazillion titles). It’s AMC that’s now leapt into the fray, but the iconic theater chain is doing it a bit differently: It will be offering movie rentals and purchases, with no need to pay for a monthly subscription.

The company announced on various social media platforms that the service has been launched as of today, with links to an informational page about how its streaming service, dubbed AMC Theaters On Demand, “delivers a world of movies at your fingertips.”

According to a New York Times report, which comes via Gizmodo, the five largest studios—including Disney, Paramount, Universal, Sony, and Warner Bros.—have all made deals with AMC to allow both films from their catalogs as well as their newly released films to be rented or purchased from the theater chain’s service. According to AMC’s CEO, Adam Aron, the service offers (as of its launch) about 2,000 films. Netflix movies will, of course, not be available on the service, as the theater chain and Goliath streaming service have yet to strike a deal allowing the former to screen the latter’s content in its theaters.

The prices for AMC’s movies, when compared to subscription services like Netflix, may seem a bit steep, however. According to Variety, movies will cost between $3 and $5.99 to rent, and somewhere between $9.99 and $19.99 to buy. For reference, Netflix’s most popular streaming subscription costs $12.99 a month. That said, AMC will obviously offer a different selection of movies, including various titles not available on other streaming service platforms. The theater chain is also making the claim that its On Demand service has an advantage over, say, Amazon Prime’s on-demand offerings, because of the way it will be linked to its Stubs program. 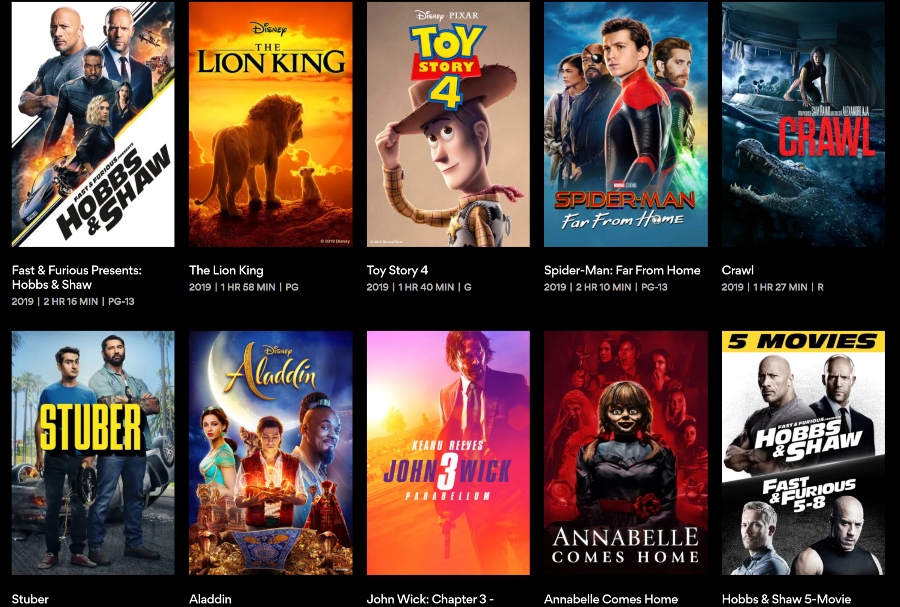 The Stubs rewards program, which has several tiers, offers its top-level “A-list” members the ability to see three movies a week for $19.95 a month (that price has recently risen to $23.95 in places like New York, California, and Massachusetts). All tiers of the Stubs program also offer points from purchases that go toward small cash rewards, as well as perks like free popcorn refills.

AMC hopes that its 20 million Stubs subscribers—900,000 of which are A-list members—will translate into a more personalized service than what’s offered from the other platforms. Because the company has data on its subscribers, and knows what they’ve watched before, it’s banking on its ability to target them with film rentals and purchases they’re likely to spend on.

But it may be hard for the on-demand model to catch on considering a small handful of rentals or even a single purchase will make it more expensive than a whole month’s worth of seemingly endless content from a competitor’s streaming service. Ultimately, it seems this service will live or die on whether or not avid film fans will end up buying further into AMC’s ecosystem, and its attempt to keep rentals, purchases, and trips to the theater relevant.

What do you think about AMC’s new on-demand streaming service? No subscription or purchases necessary to let us know your thoughts in the comments!