Adam Savage achieved worldwide fame with MythBusters and his current YouTube channel Tested. But before that, he made his name as a special effects designer and fabricator. Notably for The Phantom Menace, Attack of the Clones, and The Matrix sequels. But just because you worked on a Star Wars film, that doesn’t mean you don’t geek out in front of “Holy Grail” props just like the rest of us.

And that’s exactly what Savage does as he gets up close and personal with several original Star Wars props. All of these are about to go up for auction via the Prop Store Auction, from June 29 to July 3. You can see the delight in his face in the video below, which we discovered via Boing Boing.

Among the original trilogy props that Savage got to touch was an original Chewbacca face mold. This was created by the late, great Stuart Freeborn. The auctioneer who currently has possession of the latex mold isn’t sure which movie it’s from. But he confirms that it is definitely an original trilogy version. Another original trilogy item up for auction is Lando’s helmet, which he wore as one of Jabba the Hutt’s skiff guards in Return of the Jedi. 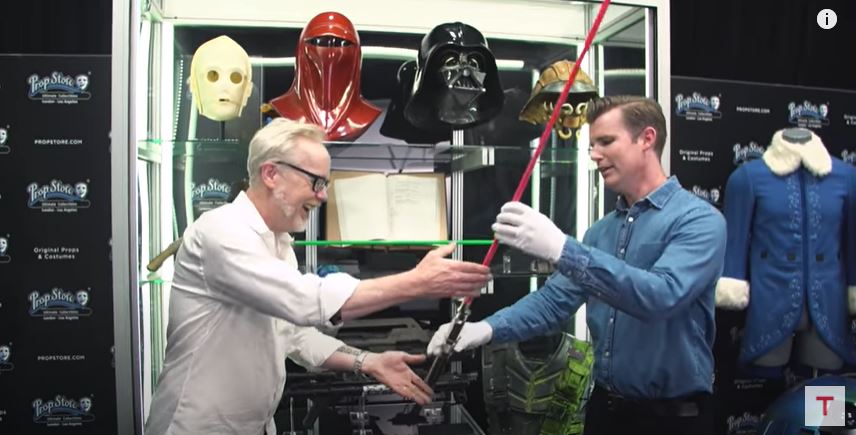 But there are also some very cool props from the prequels too. Obi-Wan’s and Anakin’s lightsabers among them. These are the carbon fiber blades created for Revenge of the Sith. Each specifically designed so Ewan McGregor and Hayden Christensen could battle it out and not worry about cracking the blades. We are already envious of whoever wins this particular auction. Can you imagine displaying both of the sabers from the defining fight scenes of the saga in your home? Speaking of Episode III’s legendary duel, a maquette of the planet Mustafar is up for auction too.

To learn more details about this upcoming auction of legendary movie props, head to The Prop Store’s website.