A Look Back at The “Simpsons Roasting on an Open Fire”

It turns out that even before they became television royalty The Simpsons already deserved a place in our homes and in our hearts.

Twenty-six seasons have to start somewhere, and for The Simpsons it was December 17th, 1989, with the Christmas special “Simpsons Roasting on an Open Fire.” They actually began life as a series of shorts on HBO’s The Tracey Ullman Show starting in 1987. But this was the episodic start of what would become one of the most iconic shows in television history. Watching it again all these years later, with the unpolished drawings and slightly off voices, the rough edges that took a season to smooth out seem more like quaint growing pains than antiquated flaws. What is far more remarkable is how many of the elements that came to define the show were already in place that very first episode. 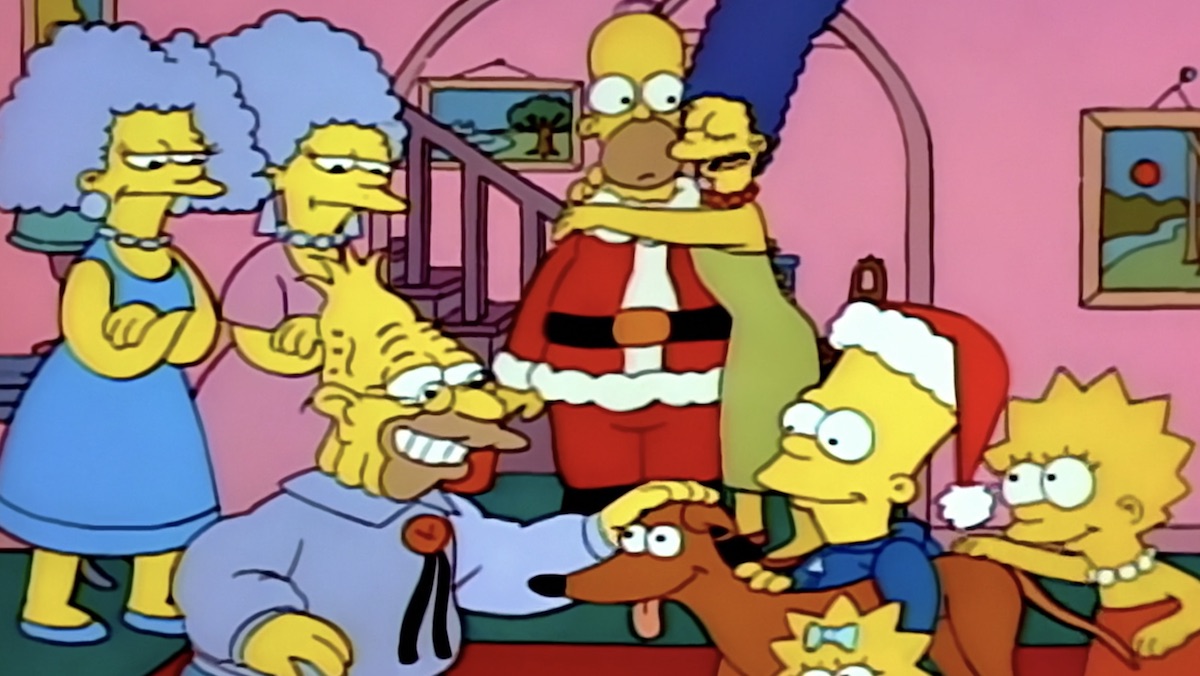 The episode’s story could describe any number of the show’s classic plots. Bart does something stupid. The family finances are a problem. Homer tries to save the day (he just isn’t very good at it). But things work out. Because, even with all the yelling and problems, at their core the Simpsons care about each other.

What specifically happens in the premiere is that after Marge has to use the family Christmas money to get Bart’s tattoo removed. Meanwhile, Homer finds out he won’t get a Christmas bonus at work. He then secretly takes a part-time job as a mall Santa so he can avoid disappointing Marge and the kids and save Christmas. Things don’t work out. And yet somehow they do.

The characters look more like what their final versions would become than they ever did on The Tracey Ullman Show. But Homer and Marge’s voices are still not right. Lots of series regulars make appearances too, like a not-yet-holy-but-still-perfect Ned Flanders. There’s also Principal Skinner, Milhouse, Barney, Moe, Patty and Selma, Mr. Burns and Smithers, and Grandpa Simpson.

A lot of the family’s personalities were already fleshed out and evident in this episode too. Marge was a planner and a worrier, a devoted mother and a wife fully in love with her husband. Lisa was already a brilliant young girl—she chastises her aunt for insulting her father in her presence with language Homer would definitely not understand—who was still very much her age. In her letter to Santa she asks for a “pony” six times. (Eventually that request would pay off with a great episode of its own). Only Maggie didn’t get any of her trademark personality traits yet.

Meanwhile, Bart, for all of his trouble making and wisecracking ways, was already displaying his secretly sweet nature that makes him lovable. Sure, he accepts a dare to sit on Santa’s lap and pull off his beard, but when he discovers that mall Santa is actually Homer and he learns why his father is working this job, Bart recognizes what that means, and delivers a line that shows who he is. “Dad, you must really love us to sink so low.” 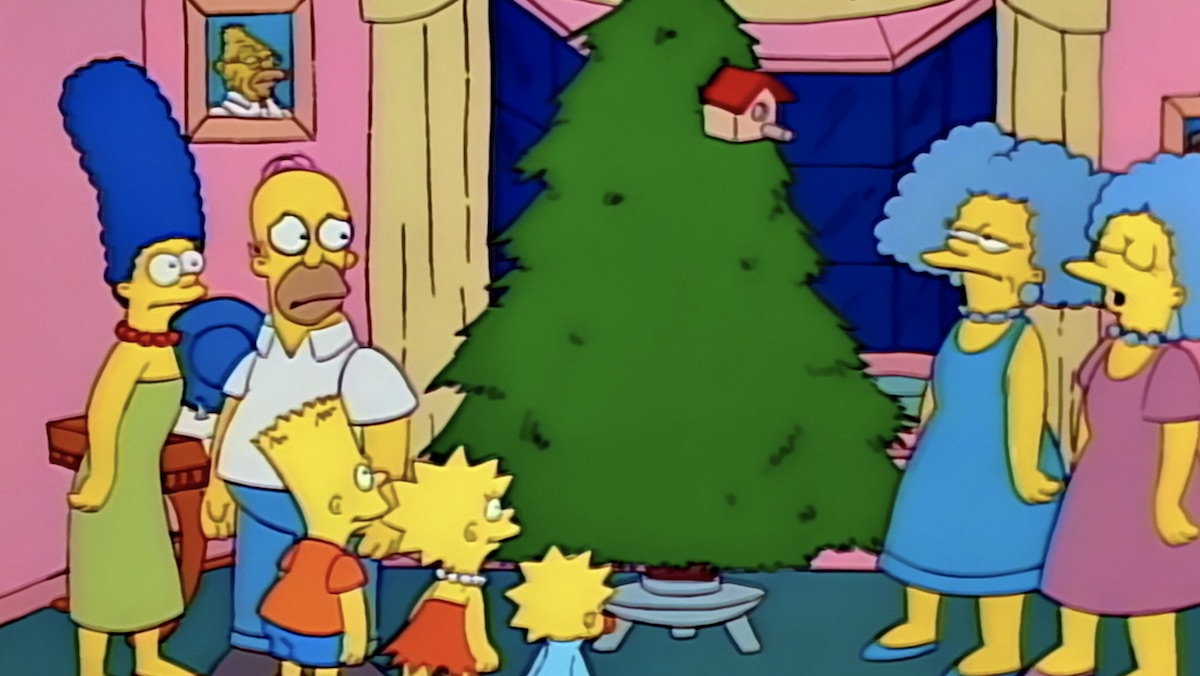 Then of course there is Homer, the emotional center and greatest source of humor on The Simpsons. He has always been that for the show, and it was true right from the start. Like most of season one, this episode isn’t especially funny. The show wouldn’t become that until season two, where for the next seven seasons it became arguably the greatest show in TV history. No, this premiere episode is probably best described as clever, with some funny lines and gags. And most of those come from Homer. His ineptness, dimwittedness, and lack of refinement lead to great moments. Like him taking a bite of a kid’s donut when he is working as Santa. Or when, to save money, he cuts down a Christmas tree on private property and then lies that the bird feeder in it is “an ornament.”

It’s certainly fair to argue the show’s single most important relationship is the one between Marge and Homer. And here his love for her, and his desire to shield her from the painful reality of his shortcomings as a provider, push the story forward. 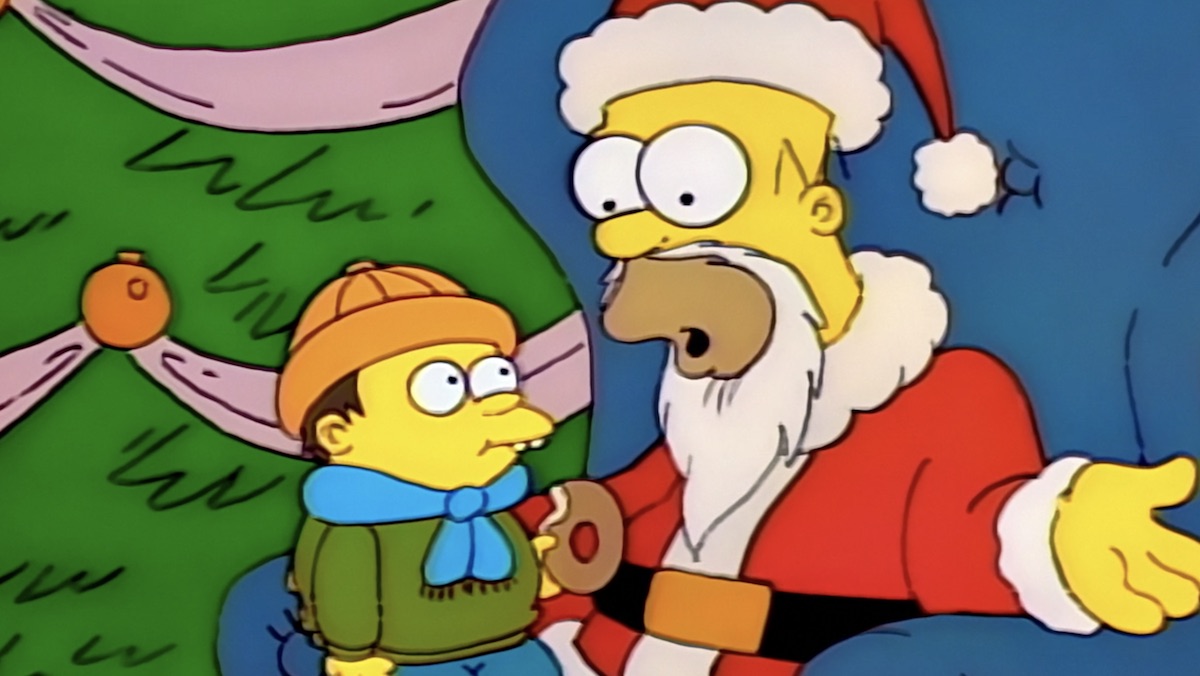 Where that story ends up and how it wraps up “perfectly” encapsulates why the Simpsons, for all their flaws, became America’s family. When Homer’s Christmas Eve paycheck for working as Santa turns out to be a measly thirteen dollars, he is convinced by Barney and Bart to go to the dog track to bet it on a sure winner. “Sorry Barney, I may be a total wash out of a father but I’m not going to take my kid to a sleazy dog track on Christmas Eve,” says Homer…right before he does just that.

(We also see the first signs of the meta/post-modern aspect of the show that would help The Simpsons become the best social commentary on American life in it’s heyday. Bart talks about how television itself proves they have to go to the dog track and place this bet. “Ah, come on Dad, this can be the miracle that saves the Simpsons’ Christmas. If TV has taught me anything, it’s that miracles always happen to poor kids at Christmas. It happened to Tiny Tim, it happened to Charlie Brown, it happened to the Smurfs, and it’s going to happen to us.”

Earlier in the episode, when Mr. Burns announces the salaries of executives are not impacted this year, just worker Christmas bonuses, we are introduced to something that would become a staple of The Simpsons—the theme of inequities in American capitalism and the greed of the rich. The more things change…) 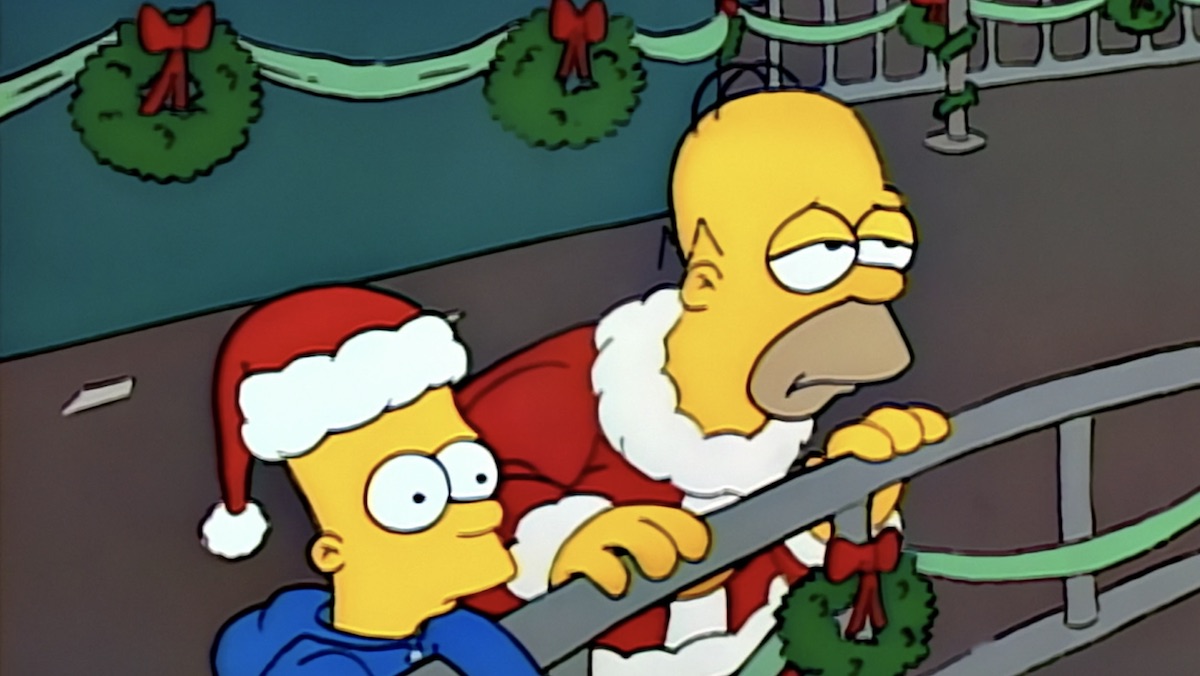 Of course, the expected miracle doesn’t materialize according to plan. When a change is made to the race, with 99-1 long-shot Santa’s Little Helper being entered, Homer is certain this is a sign. He convinces a skeptical Bart this is going to save their Christmas. Their dog finishes in dead-dead-dead last. They then find themselves outside searching the parking lot for a winning ticket.

That’s when Santa’s Little Helper’s owner, tired of the dog’s losing, sends him away into the cold night. He heads right for Homer, and Bart pleads with his reluctant father to take him home. “But he’s a loser, he’s pathetic, he’s (Santa’s Little Helper licks Homer’s face)…. a Simpson.” 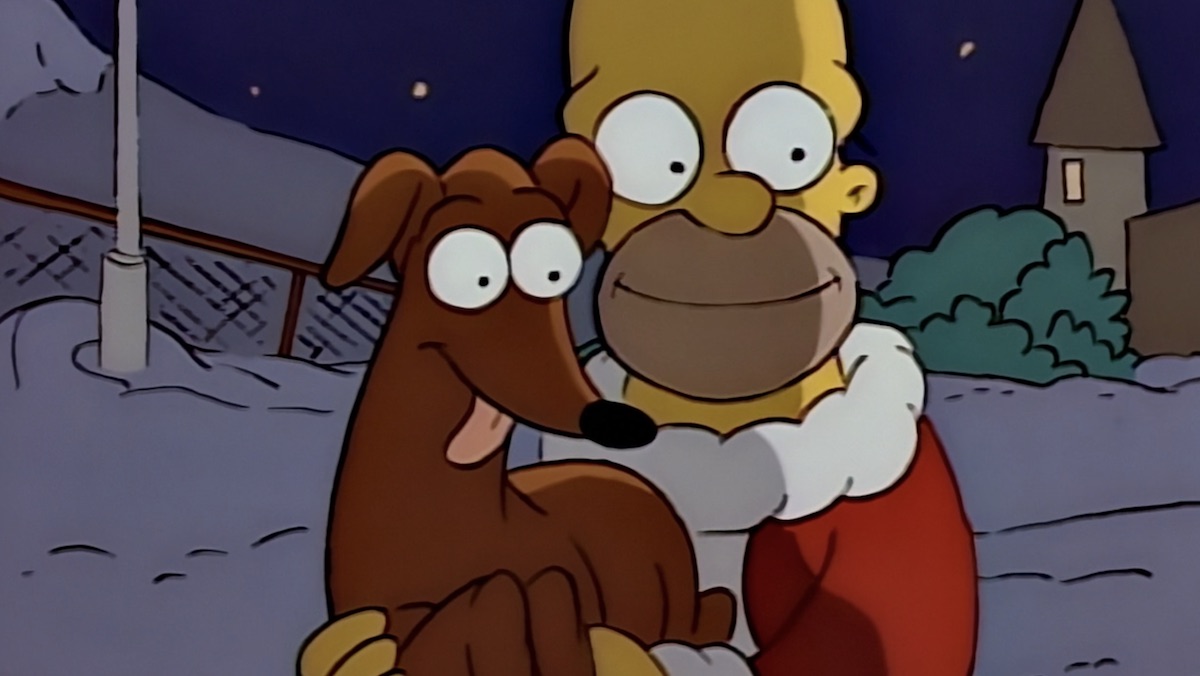 It’s a perfect line. When they get back to the house, Homer is ready to confess the truth and admit Christmas is ruined. But then Bart busts in with the newest member of the family. It’s love at first sight, and Christmas is saved. It’s the miracle Bart said television would give us. Just not in the way any of us expected.

This might not be the most polished premiere; it might not be as funny or as insightful as the best the show would come to offer. Yet it still holds up. Because it turns out at its core The Simpsons have always been about the same thing—a family that loves each other. And that’s why we’ve always loved them.