Up until now, no one can say the world of Archie Comics was very prescient. Since the Riverdale gang first debuted back in the ’40s, they’ve essentially remained in an eternal Normal Rockwell world. “Futurist” was not a term often applied to the likes of Archie Andrews and Jughead Jones. (Not so much true for their TV counterparts, but that’s a whole other ball of wax). But back in 1997, Archie Comics eerily predicted the future that is 2021 a little too accurately.

Via Design Taxi, we’ve learned that an issue of Betty Cooper’s comic from Februrary 1997 more or less hit the nail on the head. Well, at least about how kids would be learning in 2021. In Betty #46, the story Betty in High School 2021 A.D. shows off Betty having her breakfast on a typical school day, and then running late for class. Which starts in only 30 seconds. How will she make it to school on time? Well, in future Riverdale, all classes are remote, and accessed at home via computer. (And that note about “video monitors remaining uncovered at all times” sure feels like a command to activate video-sharing on Zoom.)

Sadly, this was the only thing about 2021 that this Betty comic got right. As with most predictions about 21st century life that pop culture gave us back then, there’s lots of flying cars and Flash Gordon-esque clothing. We’re still waiting on those. It seems predictions of the future from the 20th century were always high tech utopia or Mad Max-style post-apocalyptic wasteland. Instead, we’re all still just buying our clothes from Old Navy and driving our very on-the-ground cars. Yawn. 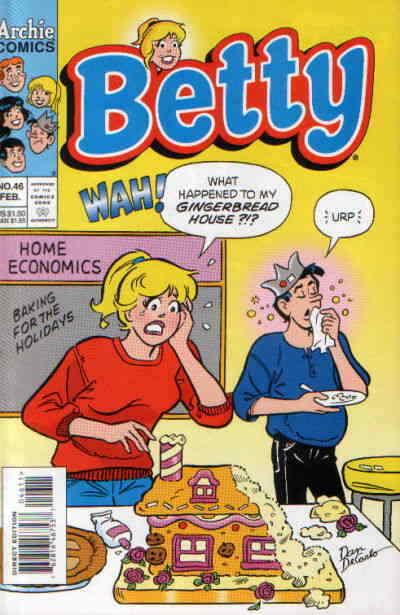 This little comic story is also a reminder to fans of the Riverdale TV series characters just how different and wholesome their comic book counterparts’ lives are. Betty Cooper’s father seems like such a nice supportive dad here; not a deranged serial killer called “the Black Hood.” Still, we’d love to see TV Betty rock comic book Betty’s Judy Jetson outfit on the show. Nothing is too wild for that show, so you just never know.