Breaking news! And we mean that literally. According to Sky & Telescope, the brightest comet that’s so far been visible in 2020, C/2019 Y4 (or Comet ATLAS), is fragmenting, which means the brilliant show it was probably going to put on for astronomers later this season almost certainly won’t happen.

Dear fellow comet enthusiasts, we may have a bad news for you... https://t.co/AqJsAcG0YC pic.twitter.com/lgaY6nEE1V

In the Sky & Telescope article, which comes via Gizmodo, it’s noted that Quanzhi Ye and Qicheng Zhang, at the University of Maryland and Caltech respectively, have reported that photos of Comet ATLAS, taken on April 2 and April 5, reveal a significant change in the appearance of its core “from starlike and compact to elongated and fuzzy.”

Ye and Zhang note in their report that this elongation of the comet’s nucleus—its solid, central part made up of frozen gases, dust, and rock—demonstrates “a morphology consistent with a sudden decline or cessation of dust production, as would be expected from a major disruption…”

Comet ATLAS was discovered in late December 2019 by the Asteroid Terrestrial-impact Last Alert System (or ATLAS), which is a robotic astronomical survey and early warning system developed and operated by the University of Hawaii’s Institute for Astronomy. At the time of its discovery, the comet was almost 3 astronomical units (AU) away from the Sun. (An astronomical unit is equivalent to the mean distance between Earth and the Sun, or 93 million miles.) Comet ATLAS’ orbital period, or the amount of time it takes to complete an orbit around the Sun, is 4,400 years.

Although the cause of Comet ATLAS’ breakup is unconfirmed at this point, Sky & Telescope notes that recent studies have pointed to accelerating spin as a likely catalyst for nuclear breakups in comets in general. This accelerating spin would, most likely, be the result of jets of gas blasting from the surface of a given comet’s nucleus, which themselves would be caused by the Sun’s heating of the comet as it approaches perihelion (the point at which an orbiting body is closest to the Sun). 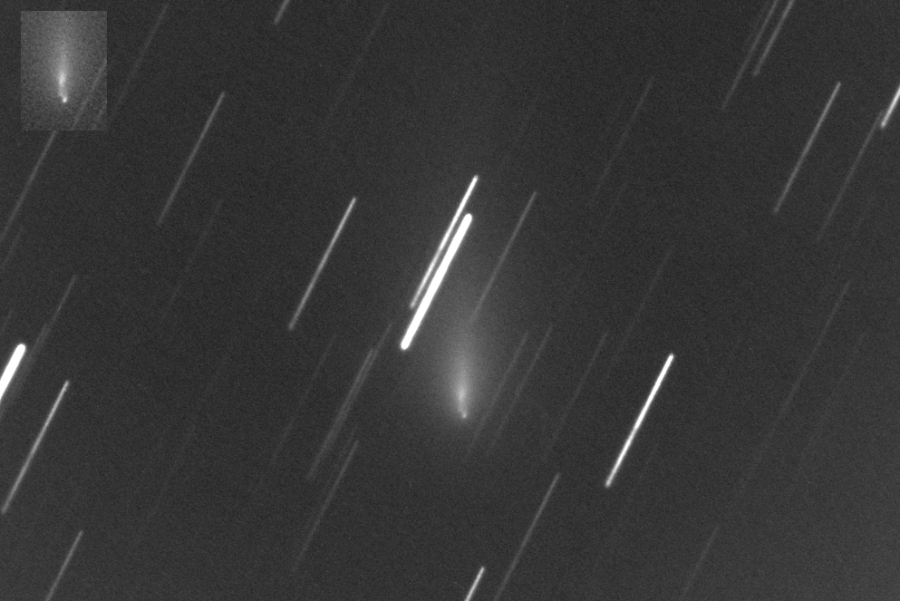 Looking forward—and up!—Sky & Telescope says, “While it’s possible ATLAS has lost only a single small fragment and will soldier on to perihelion and naked-eye visibility, the optics aren’t looking good at the moment.” For those backyard astronomers out there, however, Comet ATLAS is, as of this writing, still visible, and can be found in the constellation of Camelopardalis as a diffuse object.