The Quandary of YELLOWJACKETS’ Male Characters

Everyone who knows me, knows I love Yellowjackets. In my opinion, the show hits notes that very few others do.  Yellowjackets centers women and girls. It rejects society. And there is a queerness in the possibility and the sensibility of the show that is hard to get right. This is why, with love and respect, I take the time to consider the quandary of Yellowjackets‘ men and boys.

Unlike the women and girls, who all feel very queer, the men and boys present as quite normative. And they carry with them the imposition, perspectives, and narrowness of society. Their interjections into the story are thus at odds with the narrative’s overall project. Both because they weigh down the interesting women characters and because they bring an overt heteronormativity to their relationships with them. At best, the men on the show are distractions. At worst, they are detractors.

The Lack of Depth in Yellowjackets’ Men and Boys

There is something interesting in how Yellowjackets‘ women and girls present as far more nuanced characters than the men and boys. It feels like a subversion of how historically women are the one-dimensional bodies in a story. Present to be a love interest or a plot point, but little more. If we stop to consider, we really don’t know much about or get a lot of perspective from the men on Yellowjackets. Jeff is an average middle-aged dude. Adam is a mystery. Travis is a sulky boy. Javi is a child. Kevyn is a police officer. Ben is the coach. And he’s gay. And that’s really all they offer to the story.

In a way, that’s fitting. Because the story is about women and girls, and so the story prioritizes them. And that much I respect.

However, despite their lack of dimensions, the men and boys still take up a whole lot of screen time real-estate. Though the women outnumber the men so immensely on the show, the men and boys interweave into each of their storylines. Between Jackie and Shauna is Jeff, whom neither of them even like. In the future, a bulk of Shauna’s story revolves around Adam, who could really be anyone. Natalie’s plotlines in the past and future center around her emotions for either Travis, Kevyn, or her dad. Even Misty is dead-set on winning Coach’s affections. 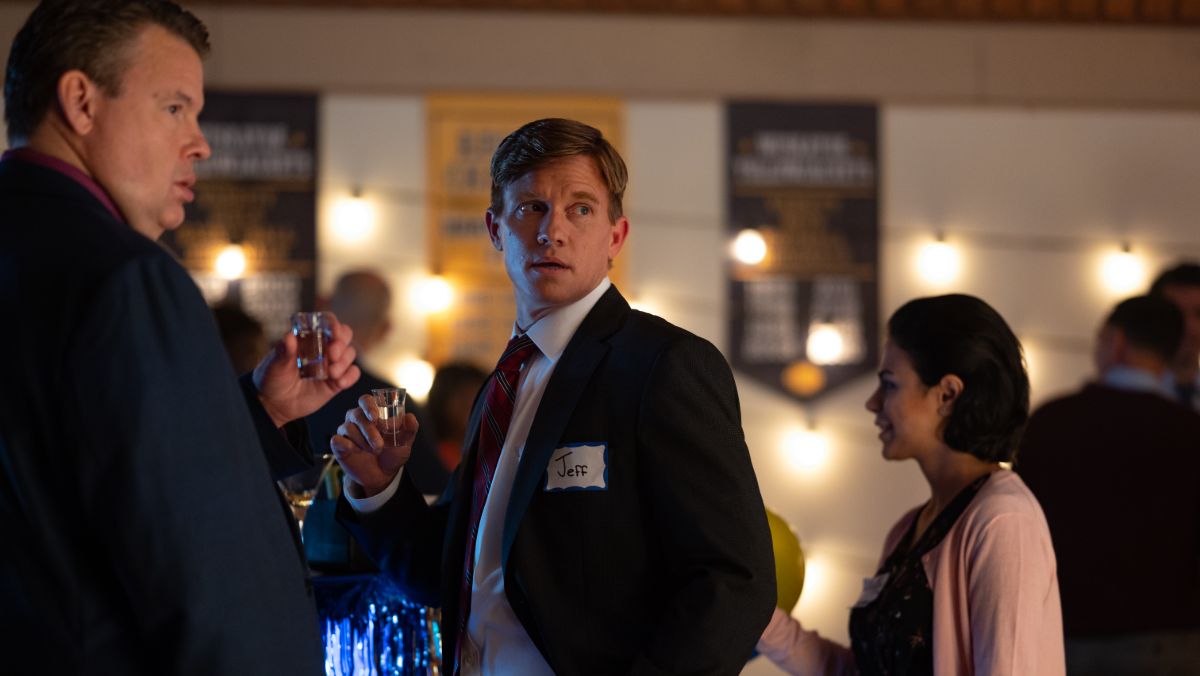 If the men and boys are going to be flat characters, without true trajectory or growth, then they should not be so prominent. When the women’s plots are driven by each other, or by a wider narrative mystery, the show really sings. But flat characters cannot be the cause of dynamic storylines. And so either the men can be made equally interesting or they can be sidelined, but they cannot be both core to the women’s plots and bland characters. As it is, it just doesn’t make sense for these women to be so embroiled in these men. But embroiled in them they are.

The Heteronormativity of Yellowjackets’ Men and Boys

Beyond this, the Yellowjackets men feel painfully, painfully normative. Jeff is the textbook definition of a white, cis straight man. Travis espouses so many lines right out of Man 101, it’s actually shocking Natalie still talks to him. As mentioned, Kevyn is a police officer. The literal manifestation of someone who upholds society’s laws. As an artist, Adam could have been different, but more or less all we know about him is that he’s a man who likes women. So their presence, both as romantic partners and not, interjects harshly into the beautiful, but much subtler, queerness the women share together.

The women themselves may have varied sexualities, but by virtue of their intimacies and the way the show encourages their departures from societal norms, they feel very queer. And when they are together, they feel even queerer. But television is a visual medium and when much of their time is spent engaging the men, feelings only go so far.

For instance, although Natalie’s relationship with Misty in the future timeline is by far the most interesting one she has, most of her screen time is split between actively pining for Travis and half-heartedly seeing Kevyn. Misty is willing to snort way too much cocaine to save her life. She is willing to literally hide a body for Natalie. The two share a definitely queer relationship that begs exploration. Meanwhile, Travis makes Natalie miserable in two timelines and Kevyn is a nice, but boring, character, who brings little to the show but his badge. And yet still, it is these two heteronormative relationships in Natalie’s life who get priority; to the detriment of the character.

Similarly, Shauna might have had a tremendous amount of mixed jealousies for Jackie in the past timeline, but placing Jeff in the middle of that feels reductive. It distracts from the key narrative: Shauna’s intense emotions about Jackie. And instead sets up the most basic of men as the stand-in for those feelings. Suddenly the question is, what relationship does Shauna have with Jeff? Suddenly the heteronormative relationship is the focus. Shauna’s feelings for Jackie remain implied in the overt action of her sleeping with Jeff. In many ways, this calls to mind another Karyn Kusama work, Jennifer’s Body. In it, Jennifer and Needy’s relationship plays out across the bodies of many men. But barely do they touch each other. The queerness is there, but we only sense it, underlying everything, instead of seeing it fully realized.

For all the many things it does right, thirteen years later, Yellowjackets still seems to fall into that same trap. The one where heteronormativity is easy, but queerness plays out either in the most subtle of ways or in diffuse background knowledge. This is not to say that sex or overt physicality makes a relationship more important. Because that’s not it at all. But when one kind of relationship is allowed to visually play out and the other is not. It creates a striking imbalance. 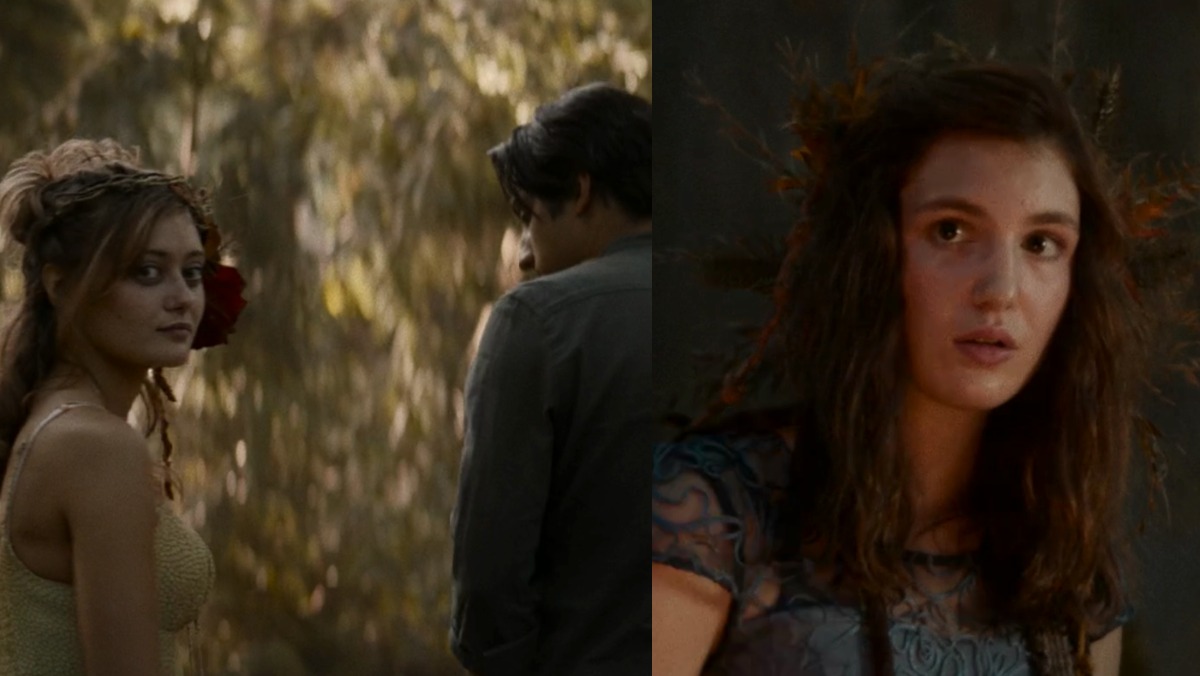 Meanwhile, Taissa and her wife Simone have not done more than exchange kisses landing them mostly in the “diffuse background knowledge” queerness category. We know they are queer, but we don’t see it shown as overtly as we do examples of heterosexuality. Coach Ben joins them in this pile. He is queer, but we have only dialogue to support that. And unlike in reality, in a show, establishing something through dialogue is not the same as cementing it in action.

Van and Tai, meanwhile, get little bursts of scenes, and though beautiful, they are constantly interrupted or abridged when compared to the other love scenes around them. They even mention in the show that something is always getting in their way. But Nat and Travis and Travis and Jackie (who never even showed any interest in one another before) suffer no such problem.

All this does not take away from my very strong feelings that Yellowjackets is a queer show at the core. Queerness, I always define, as not of the norm. And all the work Yellowjackets puts into its narratives about shedding society and finding one’s true self away from its grip are incredibly, incredibly queer. Not to mention how its leads are primarily women and girls, who are flawed, and realistic, and selfish, and loving, and who take on many different kinds of characterizations. But when there’s implicative queerness you can feel, but overt heteronormativity you can see, and one suffocates the other, it’s hard not to feel disappointed in that. Especially when the show is on the verge of getting it so right.

In a sense, the men on the show and the women’s relationships with them feel a little like crutches. Well trodden paths that many other shows have walked. Whereas their relationships with one another and their descent into a society of their own, one that they control, bring something fresh. To survive in the wilderness, you need a sharp knife. And right now, the show’s edge could be honed even further.

Hopefully, as it proceeds into the wilderness of season two, Yellowjackets will fully embrace the queerness that makes it transcendent… which may mean embracing the guys a little less.

THE LEGEND OF ZELDA: TEARS OF THE KINGDOM Teases Great Evil