You walk by a table and you stop. Sitting between two giddy players is this maze of corridors, each adorned with access panels, piping, and sagging wiring running across the phantom vertical edge. Through these little windows and doorways, miniatures of different shapes fulfill their molded plastic purpose and battle savagely. 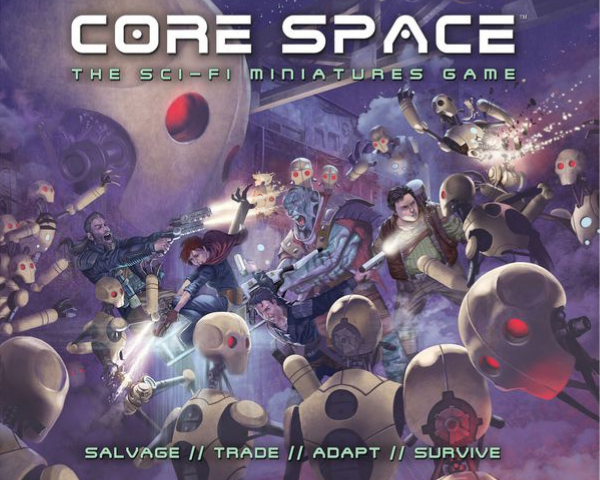 This is Core Space, a brand new release from Battle Systems Ltd that found earlier success on Kickstarter. This boxed game is sort of two products in one: A fully realized three-dimensional warzone coupled with a brand new campaign skirmish system. The latter has its own evocative setting of a galaxy bracing for invasion, while the former is a very practical process of interlocking cardboard to form a wonderful visual spectacle.

Battle Systems is not new to this sort of thing. They’ve brought their unique terrain system to market under a number of different packaged sets. They’ve offered post-apocalyptic cityscapes and fantasy themed dungeons in addition to the more varied sci-fi collections. The big leap with Core Space was bundling a new cyberpunk-style offering with a full-fledged game.

This terrain is visually impressive and does wonders to bring an urban battlefield to life. Each boxed set contains a 2’x2′ neoprene mat that includes faint grid-lines of 1″ squares. The walls and larger elements slot together with plastic connectors. These are included in straight and angled varieties so that you can customize the sight lines and vectors to your pleasure. 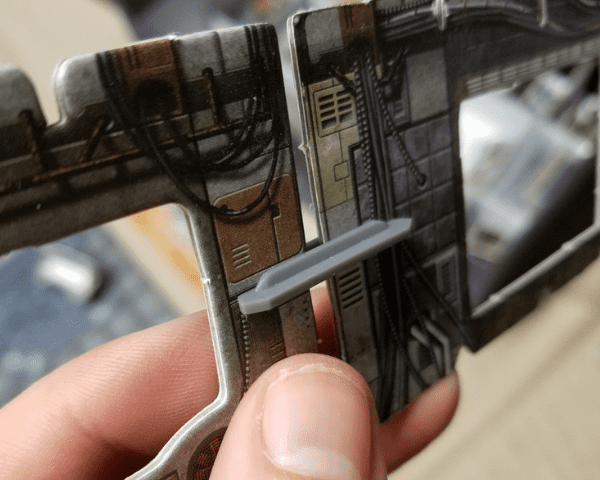 Many of Battle Systems’ products extend vertically as well. I was able to experiment with the “Galactic Core Set” that has multiple levels with walkways and three stories worth of platforms to explore. These vertical additions work similarly, connecting clips to the top portion of the cardboard walls and working your way towards the sky.

One element easy to overlook is the sheer amount of scatter included. You have weapons lockers, crates, tables, chairs, beds, shop counters, signage and more. All of this is fully modular and able to attach to any Battle Systems terrain. You can even mix and match across sets or combine two packages to form a mega-complex that’s simply itching to be burned down with boltgun or blaster fire. 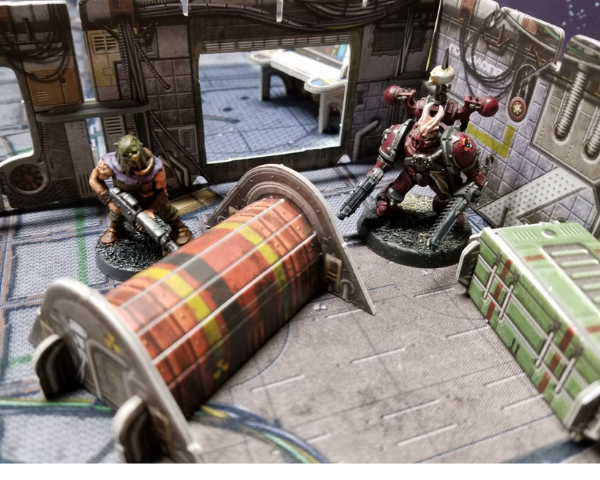 This terrain works extremely well for Warhammer 40k or Kill Team, allowing you to setup an interior environment full of nooks and crannies to dart into. You will want more than one set for a full 40k battle, although a single core does work wonderfully for Kill Team. The terrain also supplements well with Games Workshop produced terrain as the cardboard nature is somewhat obfuscated due to the strong double-sided visual printing on the components.

The big cost here is of course in time. It’s much simpler to throw some hills or just a couple of buildings down on a table and call it a day. Assembling a battlefield of Core Space terrain can take roughly 30 minutes. It’s a bit of a bear and a procedure you will want to accomplish before your opponent arrives.

On the plus side, it all packs away very neatly in the Core Space box. There are slots for different pieces to be grouped, and you don’t need to break down the smaller scatter items. In this respect we trade setup time for precious storage space. 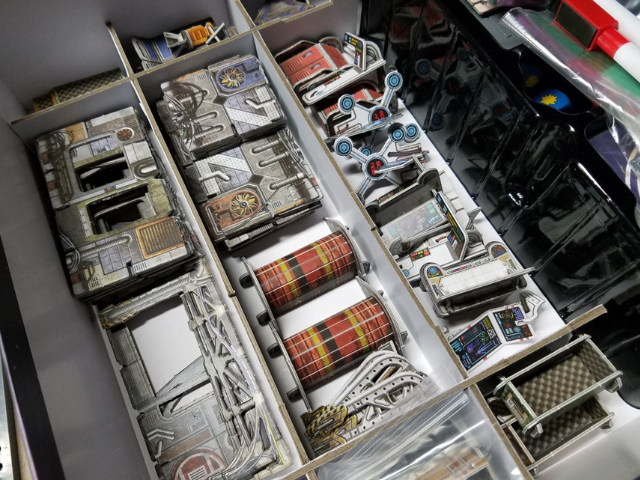 It’s easy to forget that Core Space actually comes with a game. The visuals are mesmerizing but the included ruleset is quite the payload. While a true miniatures game involving measured movement and craning your neck to decipher line of sight, the system on the whole plays very much like a contained board game.

The setup is that players each control a crew of traders venturing to the far reaches of space to salvage. This gray zone is currently under siege from the invading Purge, a cybernetic faction intent on harvesting bio-matter. It’s a once prosperous region that is now dwindling in population and infused with danger. Of course, we’re game to exploit that.

The tone is a potent mix of Cowboy Bebop, Firefly, and Shadowrun. In many respects this could very well be THE Shadowrun board game as you take a group of operatives, get in, and get out before the Purge show up. 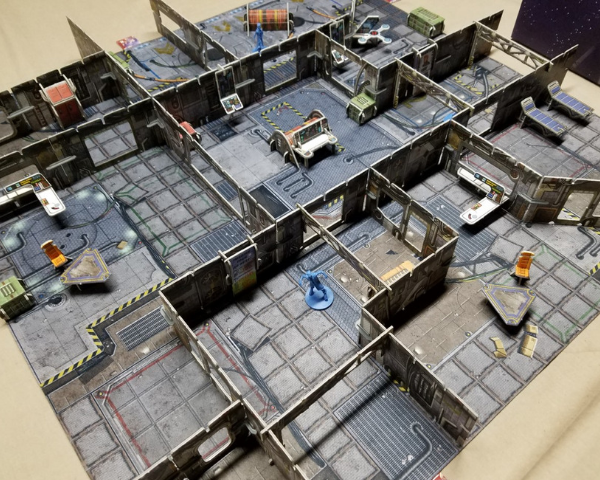 The environment is Core Space’s most able weapon. Neutral civilians wander the corridors and may provide assistance or offer push back. Their behavior is erratic and only further dramatized by an unpredictable event deck.

Making matters worse–or rather, more interesting–is that each player is competing for the same job. Up to two players can participate in the base game, each running their own crew and acquiring their own gear and experience over the length of the campaign. In any given scenario you may race your opponent to complete the goal or perhaps collaborate to achieve a more beneficial overall result.

This semi-cooperative tone is astonishing. You may start off cautious of the opponent, each working your way across opposite sides of the map towards a computer terminal at the center. As you scavenge gear and make your way inwards, a standoff occurs. Finally, it’s broken when the Purge arrive. The Purge always arrive.

The AI controlled robotic enemies function as a timer. They become more and more likely to spawn as the game progresses, with missions rarely lasting more than 60-90 minutes. Due to their overwhelming nature and the unending swarm, you are often best advised to work together. Moments will arise where your hardened sniper is downed under a vicious plasma attack from a Purge Devastator. You then barter with the other trader captain, offering their player some salvage to evac your crewman. These fleeting alliances amid uncertain chaos are the fabric of the Core Space DNA. 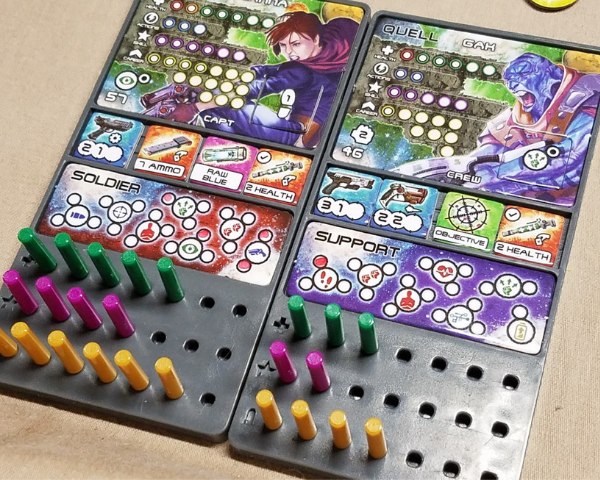 All of this is occurs through an ongoing campaign. You will sell gear you’ve scavenged and spend your mission spoils repairing your ship. You can upgrade your transport as well as procure better and more sophisticated weapon options. Each of your team members will advance a la Necromunda, acquiring new skills and advancing their stats.

This is a phenomenal game you shouldn’t quickly dismiss. While I’m a member of the church of Kill Team, my group has been more enthralled with this shiny newcomer offering new worlds and story to explore.

Whether you are eyeing this beautiful set simply for its collection of bad-ass terrain or you’re pining for a new miniatures game to take on, Core Space will leave you gobsmacked. This box is the real deal and one of the most pleasurable experiences I’ve had thus far in 2019.