“Weird Al” Yankovic has a helpful habit of providing the world with some good news when it sorely needs it. He did that when he took over the internet in the summer of 2014 ahead of hisÂ Mandatory FunÂ release, and now he is providing some much needed levity again with his forthcoming barebones tour,Â The Ridiculously Self-Indulgent, Ill-Advised Vanity Tour.After 200 mega-sized shows to support 2014’s number-one selling albumÂ Mandatory Fun, the musical comedy legend is going on a 74-date jaunt across the country to perform deep cuts, original material, and rarities that exist beyond the scope of his well-known parodies. Promising to switch up his set-list for each concert, Weird Al will be performing at smaller venues, promising a laid-back environment that is not planned down to the millisecond, like his usual theatrical productions. Opening for Yankovic is his longtime friend andÂ UHFÂ colleague Emo Philips, who will perform about 30 minutes of comedy before Yankovic’s 90-ish minute set.We caught up with Yankovic and asked him about his upcoming tour and what we can expect from the experience. Check out our full correspondence below and his full tour dates below that. Tickets will go on sale on October 20, and for more info head to Yankovic’s official website. 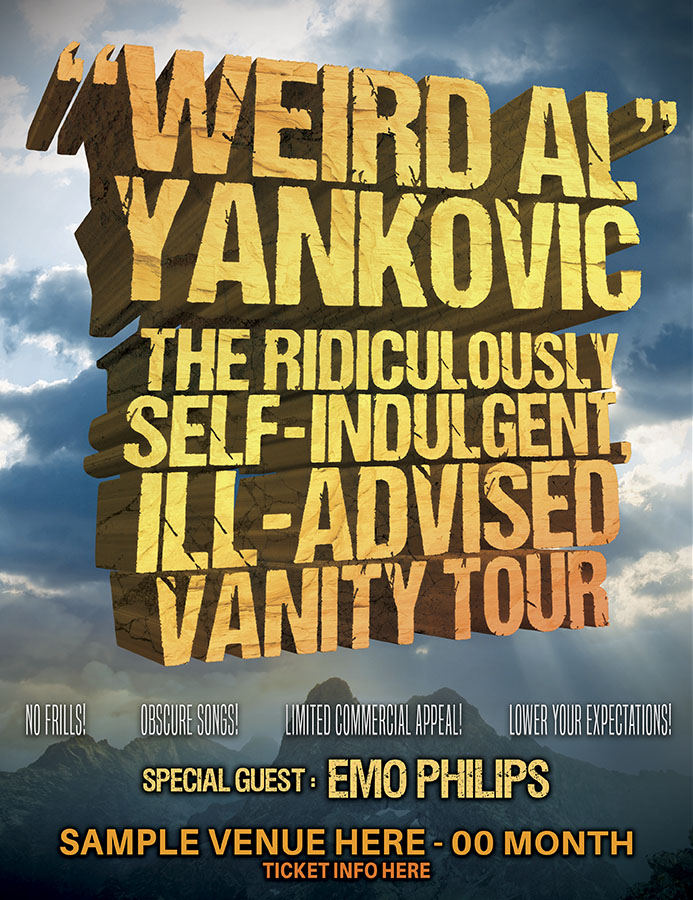 Nerdist: So you just wrapped your biggest tour ever not that long ago. How do you possibly have this much stamina?Al Yankovic: Iâ€™ve definitely had time to relax, reconnect with my family, even take a shower! But yeah, when Iâ€™m on the road, itâ€™s pretty exhaustingâ€“I get a real workout every night. This upcoming tour shouldnâ€™t be too taxing though; weâ€™re just going to walk out on stage, sit down on stools, and play a bunch of songs. No running and jumping around, or changing into thirty different costumes. Itâ€™ll be a little rougher on my vocal cords, because I wonâ€™t have any video breaks during the show. But the whole vibe of this next tour is going to be pretty laid back. Itâ€™s the â€œLetâ€™s Not Work Up Too Much of a Sweatâ€ tour.N: What do you hope fans will take away from this tour?AY: Primarily, lots of MERCH. That would be good. Besides thatâ€¦ this tour is geared specifically for the long-time hardcore fans, so I just hope that some of them get their minds blown by hearing some obscure old favorite songs that they never dreamed theyâ€™d ever get a chance to hear live. And weâ€™re really pulling out the deep cuts for this show. Weâ€™re rehearsing 50 or 60 songs, most of which weâ€™ve either never played live before, or havenâ€™t played in decades. Itâ€™s a lot of work. Iâ€™d also like to think that, since this show will be comprised almost entirely of my original songs, it might shine a light on the fact that Iâ€™ve done some decent non-parody material over the last three decades. But hey, Iâ€™m not kidding myself â€“ I know that to 95% of the general population, Iâ€™ll always just be the â€œEat Itâ€ guy.

N: What are you personally hoping to get out of this tour?AY: The band and I are really just looking forward to a change of pace. Iâ€™ve been putting on fat suits and riding Segways around the stage, and I just wanted to do something totally different this time out. I donâ€™t think Iâ€™ll be making a habit of this: this is quite possibly a once-in-a-lifetime thing. Itâ€™ll also be really fun for me to play some of the songs that I was always proud of, but somehow slipped through the cracks. There are only so many songs I can perform in my live show, and the parodies are the audience-pleasers, so we have to focus on those, and as a result, a lot of my original material never makes the cut. But this is not an audience-pleasing show. Itâ€™s probably going to be an audience-baffling show. As Iâ€™ve said before, thereâ€™s a subset of my fan base thatâ€™s going to go absolutely nuts for this tour, but it might not be for everybody.N: Are you nervous about the less structured approach?AY: Well, I wasnâ€™t really nervous until you just brought it up! Yeah, I always get a little nervous right before a tour, and particularly when Iâ€™m doing something new. And this tour is extremely different from every other tour Iâ€™ve done. I guess I just have to go into it with a good attitude. I know itâ€™s not going to be perfectâ€¦ itâ€™s not supposed to be perfect. All my other shows were rigidly planned down to the second, and on this tour, weâ€™re literally doing a different set list every night. Iâ€™m going to talk a lot more on stage. See, this is really going against my nature and stepping out of my comfort zone. Iâ€™m the kind of guy that likes to have everything super-planned out and over-rehearsed and always know exactly what Iâ€™m going to do and say. On this tour, Iâ€™m just going to walk out on stage and see what happens. It could suck; it could be amazing. Thatâ€™s a little terrifying to think aboutâ€¦ soâ€¦ Iâ€™m going to stop thinking about it.
N: What does it mean to be touring with an old colleague, Emo Philips?AY: Iâ€™m really looking forward to that. Emoâ€™s one of my oldest friends, and I think heâ€™s seriously one of the funniest guys in the world. Iâ€™ve never traveled with a support act before. For a long time, promoters would hire local comedians to open the show. We never knew anything about them before we got there. Some were good, some were not so good, and some were totally inappropriate. And then, when our show length passed the two-hour mark, we decided to eschew the opening act entirely and make it an â€œEvening With Al.â€ But weâ€™re going to try not to bust anybodyâ€™s bladder on this tour: Emoâ€™s doing about 30 minutes, and Iâ€™m doing about 90. Itâ€™ll be really fun; I always have a good time with him, and itâ€™ll be a blast riding a bus with him for 15 weeks. I just hope he doesnâ€™t snore, or perform daily ritual sacrifices or anything. Eh, whatever, Iâ€™m sure Iâ€™d get used to it.N: Will you be hosting any special guests throughout the tour?AY:Â Besides Emo? Hmm, well, no, thereâ€™s nothing planned. But that doesnâ€™t mean it wonâ€™t happenâ€¦

Op-Ed: Why STRANGER THINGS 2 Deserves Much Better Than a Bin...