This Wearable Battery Is Powered By Human Sweat - Nerdist

This Wearable Battery Is Powered By Human Sweat

The Matrix machines powered their civilization with human batteries. That premise wasn’t entirely science fiction. There are countless ways we can generate electricity. We’re all basically breathing power plants. But no one wants devices putting us to work. Fortunately scientists in Singapore have developed a device that turns our hard work into power for us. They’ve created a small wearable battery that converts our own sweat into energy.

A paper in the Science Advances journal (which we first learned about at DesignTAXI) explains how scientists at Nanyang Technological University found inspiration in perspiration. They’ve engineered a battery you can wear. The soft and stretchable prototype features printed silver flake electrodes “that generate electricity in the presence of sweat. It’s small too, measuring just two centimeters by two centimeters. The team says it’s “as flat as a small paper bandage.” How it works is even cooler.

The battery is “affixed to a flexible and sweat absorbent textile that is stretchable and attachable to wearable devices.” Something akin to what you find on watches, wrist bands, and arm straps. It generates electricity when it detects Chloride ions and acidity present in our perspiration. They make the silver flakes clump. That makes it possible for the electrodes to conduct electricity.

To display its potential use in both wearable biosensors and electronic devices, the team used artificial human sweat to test it. They also conducted a trial with people riding stationary bikes for 30 minutes. That experiment generated “4.2 V and output power of 3.9 mW.” And that was “sufficient to power a commercial temperature sensor device and send the data continuously to a smartphone via Bluetooth.” 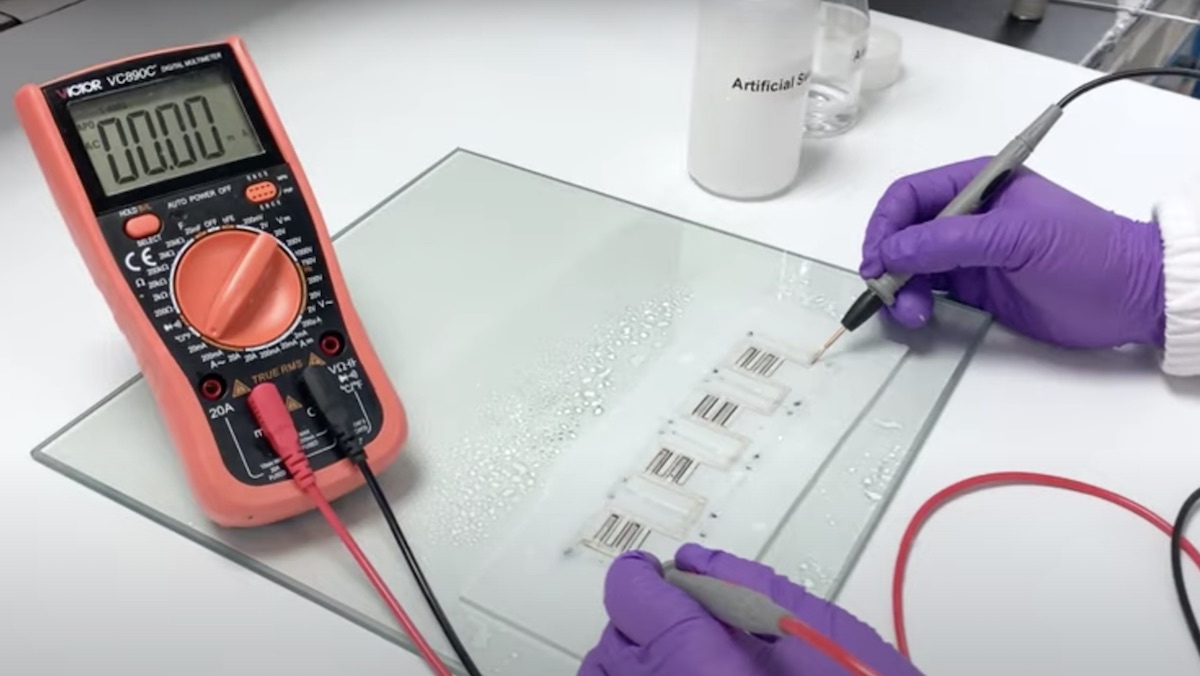 The potential advantages of converting our own body’s sweat into energy are obvious. Especially one that works like this. The NTU battery “does not contain heavy metals or toxic chemicals unlike conventional batteries.” And those “unsustainable materials” harm the environment.”

We all know the perils of dropping a toaster in a bathtub. It’s why wearing a battery that keeps getting wet sounds counterintuitive. But a safe, environmentally friendly power source generated from a free personal resource is a dream. Of both man and machine alike.

The Matrix machines kept their human batteries in goo.