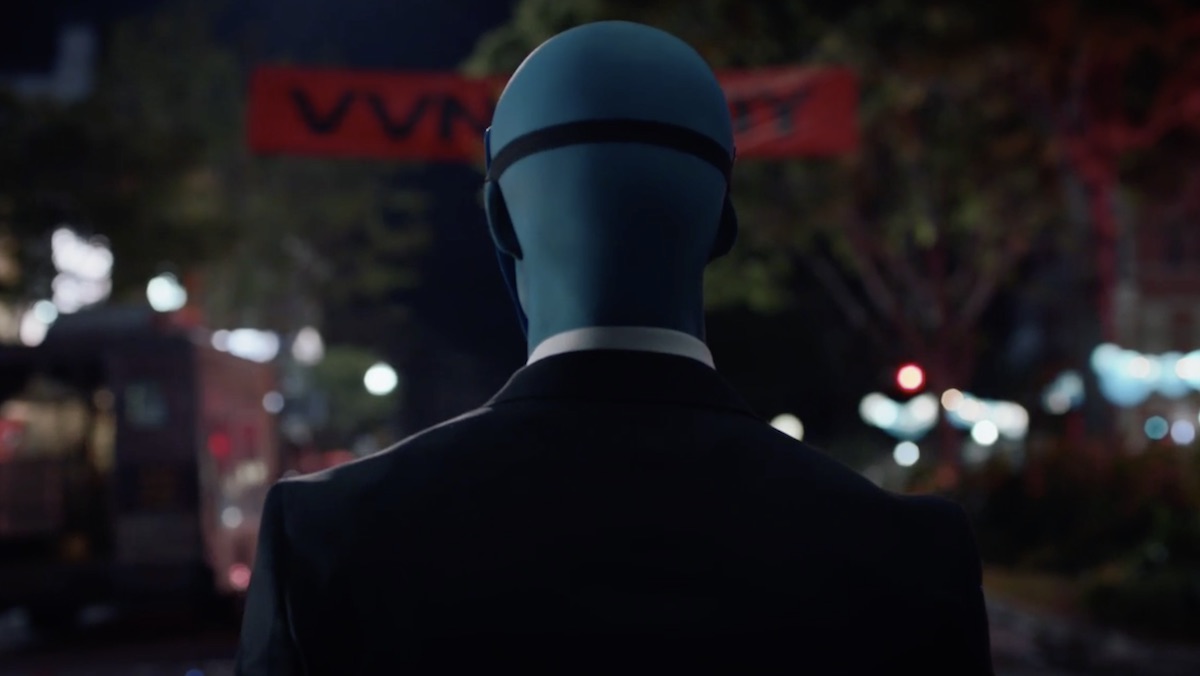 Chapter four of the original Watchmen comic, “Watchmaker,” tells the tale of Dr. Manhattan’s life before and after the accident that made him a god. In it he shows the unique and terrible way he experiences his entire life at the same time. It’s beautifully written, haunting and powerful, like a Greek tragedy about the perils of power. But it also reads like the sad origin of a super villain. At that point in his existence Dr. Manhattan had become an uncaring god indifferent to humanity’s fate. “A live body and a dead body contain the same number of particles,” he said earlier. That’s not who he was by comic’s end, though, and that’s the man we met in Watchmen‘s gorgeous eighth episode, which was an incredible hour of television and a fitting tribute to the graphic novel.

Try to remember the best moment in your life, all the joy and elation you felt. Now try and remember your worst moment, with all of the pain and hurt it brought you. Can you hold both memories at once? What if you also try and remember the second, third, and fourth best and worst moments too? Seems impossible, but even if you could how quickly would the weight of them collapse on you, leaving you flat? How soon would would all those emotions overwhelm you and make you feel nothing at all? That’s the burden Jon Osterman carries at all times. He’s always experiencing every event in his life, along with every emotion he ever felt during them, at every moment. Extreme happiness and sadness, anger and confusion, hope and despair, they are always right there, now and forever. Because now and forever are the same to him. 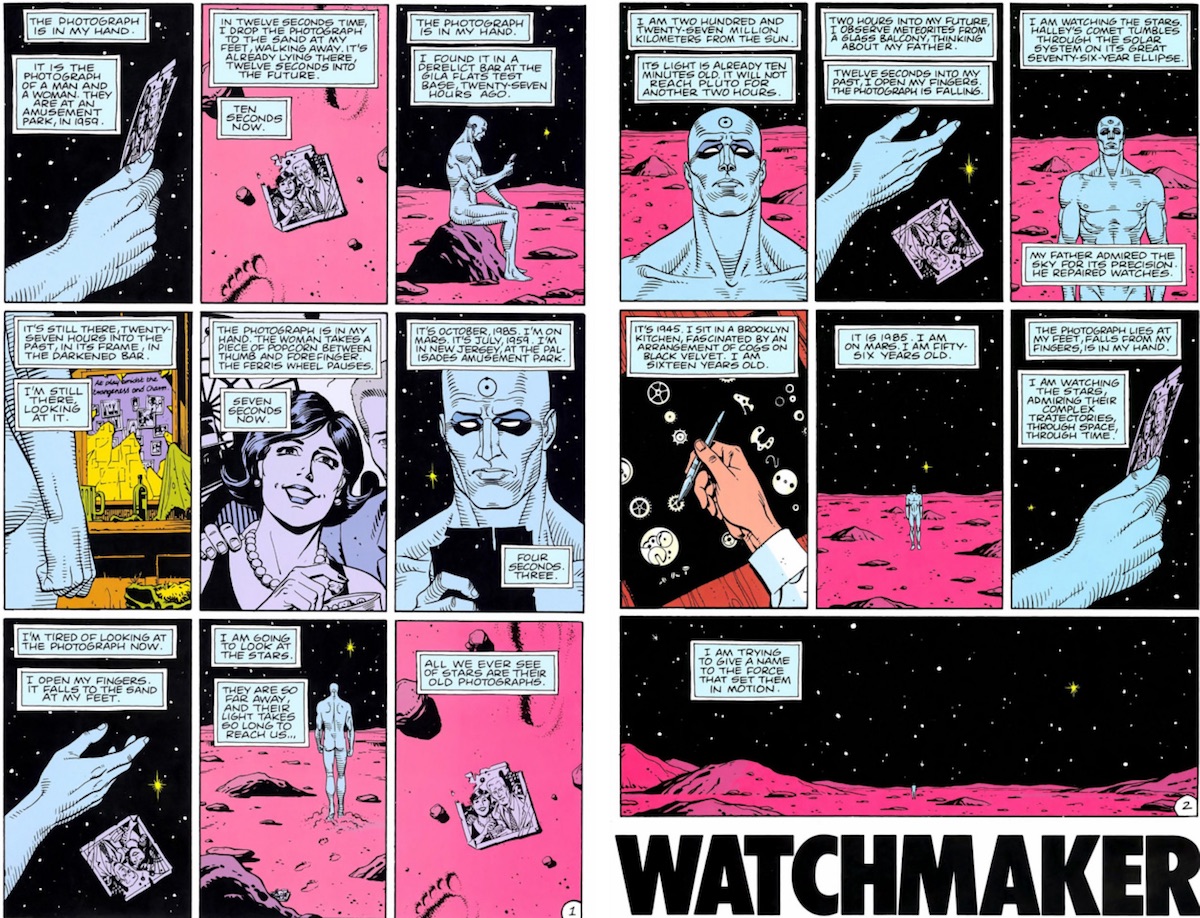 Maybe we don’t know what it’s like to be a god, but that horrible burden makes it easy to understand how Dr. Manhattan lost most of his humanity by 1985 when he left Earth for Mars. The few emotions he still felt had been manipulated by Adrian Veidt, and his only other connection to mankind, his girlfriend Laurie Blake (then Juspeczyk), left him. It was too much even for a literal god. And who would want to continue living the complicated life of a human when you aren’t one anymore? Who can stay connected to people when they can’t empathize with you or you them?

But at the end of the graphic novel he did reconnect with humanity. He realized human life is a thermodynamic miracle, each and every person’s existence a near improbability defying all odds of science and logic. Dr. Manhattan wasn’t the uncaring monster we first met, he was Jon Osterman, a man unfairly burdened with the powers of god.

He left Earth again in 1985 after failing to stop Adrian Veidt’s squid, but not to run away from life. He took his newly rediscovered empathy with him to create life of his own somewhere else. That was the last we saw of him until HBO’s Watchmen brought him back, in a story that truly understands the beautiful tragedy introduced in the comic. 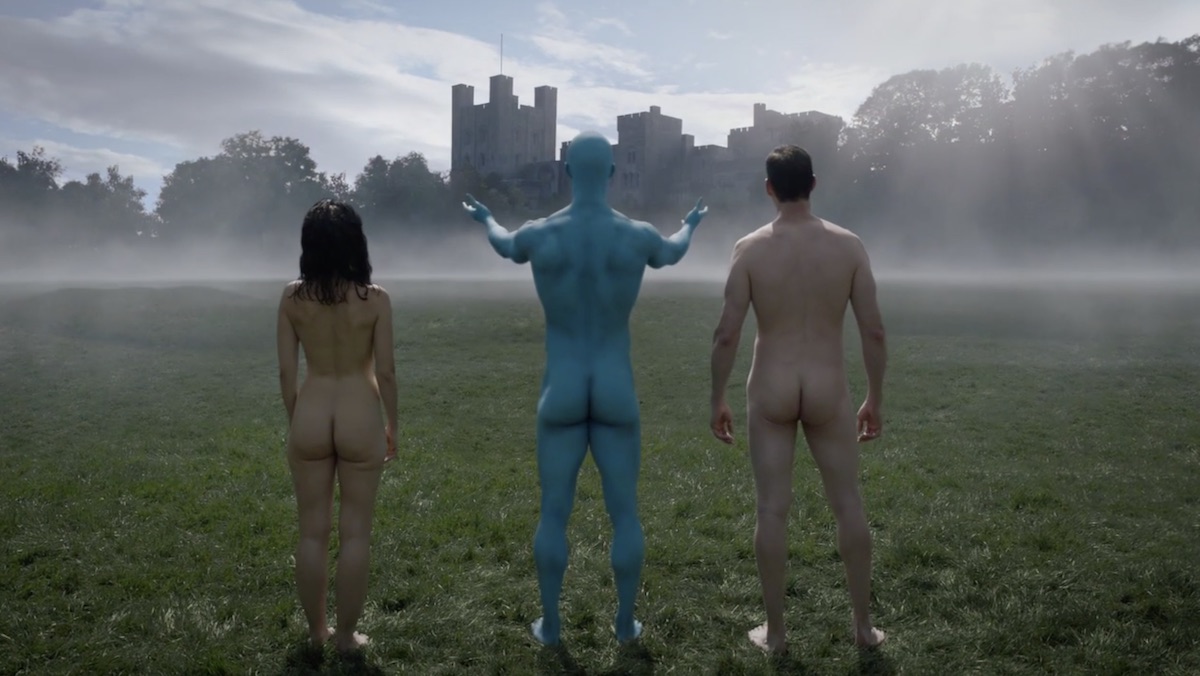 Dr. Manhattan went to Europa and created a simpler kind of life, one devoid of the complications of Earth. His Adam and Eve, who care more for others than themselves, were based on the couple who saved him from the Nazis as a young boy. It was a gorgeous revelation, one of many throughout the episode, that showed just how human he is. He also feels regret for what he did to Vietnam, and he set up a decoy of himself on Mars so the world would not think he had totally abandoned them. Of course he had for 24 years, until he returned on VVN Day in 2009. That’s when an unbelieving Angela asked him why he had come back. “So I could meet you,” he told her.

Dr. Manhattan returned to Earth for the most human reason of all—love. Real love, not the “unsatisfying” infinite love he got from his children on Europa. He created them to adore him. They couldn’t provide him with the feeling of fulfillment you can only get when someone chooses to love you of their own free will. There are no thermodynamic miracles of love if you create them with the wave of your hand. Those require risk. They require sacrifice and pain, because without pain joy is meaningless.

And he wanted to take that risk even though he knew it would all end in tragedy. Him and Angela came out of their tunnel of love to find the Seventh Kavalry waiting for him with a tachyonic cannon. Dr. Manhattan always knew they would. There’s no reason to doubt him when he says they will also use it to destroy him. To him they already have. For Dr. Manhattan tomorrow is now, and so is yesterday, forever and always. It’s horrible when you remember underneath that glowing blue skin he’s just a man. That’s what also make it so beautiful too, because it was his final moment with Angela that made it so he always loved her. She was going to try and save his life even when she couldn’t.

Her true love for him is why it was all worth it, even though he has always—and will always—live through their sad ending already.

“By definition don’t all relationships end in tragedy?” he asked her when they first met. They do, and yet one foregoes them because of that reality. It’s the nature of love and being loved that some day we say goodbye, like Angela and Jon are now. But their ending will also mark the end of the tragic life of Dr. Manhattan, a character whose lost humanity only highlighted just how human he was.

His touching and terrible tragedy started in the comic, and its final chapter only made it better.