Alan Moore and Dave Gibbons’ classic graphic novel Watchmen had a very different ending from Zack Snyder’s 2009 big-screen adaptation. In the movie Adrian Veidt, the superhero known as Ozymandias, unleashed simultaneous attacks around the world that were designed to look like they were done by Dr. Manhattan, all in the name of creating a global utopia by uniting every country against a common enemy. In the comic book, Veidt had the same goal, but, rather than frame Manhattan, he transported a massive tentacled “alien” monster to New York, killing half the city. Yes, it’s as weird as it sounds, but it’s a cataclysmic event that frames the past and present of Damon Lindelof’s new Watchmen series on HBO, a direct sequel to the comic. And whether you have never read the comic or need a refresher, here’s everything you need to know about the giant squid who will loom over the series.

Veidt’s master plan maintained most of the same elements in Snyder’s film as it did in the comics. In both, he manipulated Dr. Manhattan emotionally by making the godlike being think he had caused loved ones’ cancer, all to drive Manhattan away from Earth while he neutralized the other Watchmen who might stop him. Veidt also sent tacyhons back in time to block Manhattan’s ability to see into the future and exploited the blue demigod’s own powers as a major part of his plot. In the movie, Veidt harnessed Manhattan’s energy; in the comics, he exploited Manhattan’s teleportation powers.

The movie ended with Veidt’s Manhattan-powered energy reactors murdering millions in major cities around the globe, which made the whole world think Manhattan was responsible. The deception not only stopped the Cold War and the looming threat of nuclear war; it united the planet against a common enemy, forging a new era of peace. But in the graphic novel, Veidt’s fake common enemy was not Manhattan. It was a giant monster that closely resembled a squid.

Decades earlier, Ozymandias had realized that the Comedian was right: mankind would never be saved by superheroes fighting crime, let alone avoid nuclear holocaust because of them. Veidt, both the world’s smartest person and incredibly wealthy, gathered some of the best writers, artists, and scientists on a remote island for a secret project. They all believed they were working on a movie that would include an enormous, genetically-engineered monster.

Standing at least 100 feet tall, the creature of their making had dozens of long tentacles covered in boils, one giant eye, and a terrifying horned beak for a mouth. It was clearly not of this world. For the creature’s massive mind, which sat exposed atop its nightmarish head, Veidt stole the brain of a dead psychic. He then cloned and strengthened the squid’s brain with a device that amplified its psychic capabilities and he fed it horrible images and sounds.

To ensure his plan would remain secret until he was ready to use his squid, which he did on New York City the night of November 2, 1985, Veidt killed everyone who worked on the monster, blowing up the ship that was meant to them home. Meanwhile, Dr. Manhattan, Night Owl, and Silk Spectre agreed to keep Adrian’s terrible secret, but Rorschach refused to stay quiet and was thus killed by Manhattan, who left Earth soon after.

Veidt was able to send his monster to New York after partially harnessing Dr. Manhattan’s teleportation powers. He could transport an object across the planet, but he couldn’t prevent it from occupying the same space as something that was already there; two objects simultaneously existing in the same spot would result in an explosion. This didn’t pose much of a problem, as Ozymandias wanted his squid to die, which it did instantly after suddenly appearing in the city out of thin air. (Even if the explosion hadn’t killed it instantly, the squid was intentionally designed not to survive. It lacked a skeleton.)

Some perished in the resulting blast of tentacles breaking through buildings, but half of New York died when they were hit with the squid’s psychic shockwave, which it emitted the moment it died. Bodies with gruesome dying screams on their faces lined the streets, blood pouring from their ears. The horrible images and thoughts emitted by the squid were too much for the human mind to deal with.

To the world, it looked as though an alien, either from another planet or dimension, had killed millions. It was easier for mankind to accept this story as true because Veidt had been sending subliminal messages about alien invasions via his many consumer products and movie theaters for years. 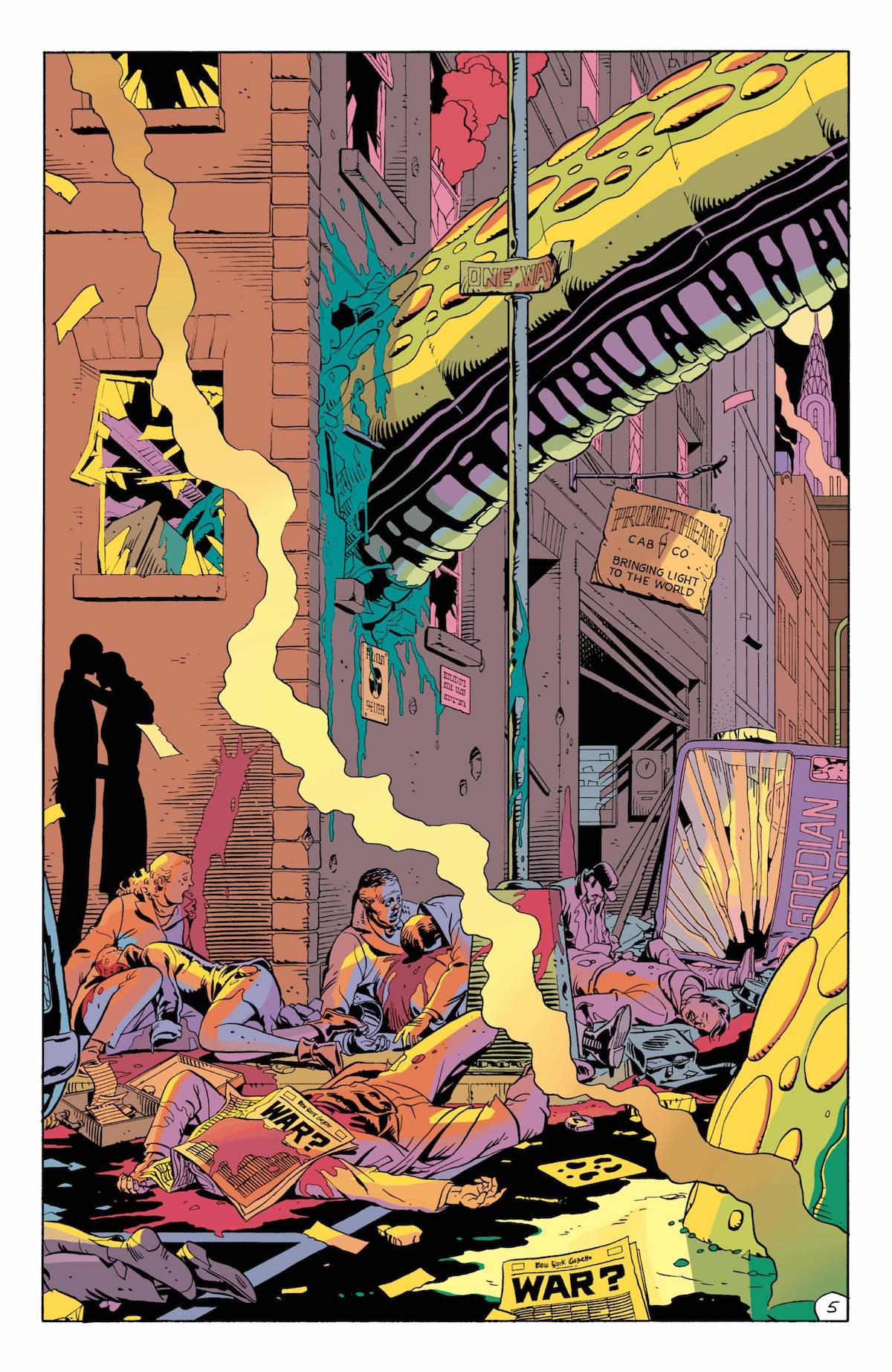 Veidt’s plan worked, giving the earthly nations a much greater existential threat than one another to worry about. The unifying cry of “Watch the skies” served as a reminder of the alien danger the new world would always have looming over it. With Dan and Laurie on board, Rorschach dead, and Dr. Manhattan off the planet entirely, only one threat to Veidt’s grand plan remained unaccounted for: Rorschach’s journal that outlined the whole scheme.

Before he went off to Antarctica to try and stop Ozymandias, Rorschach left his notebook with the fascist right-wing paper the New Frontiersman. Both the comic and the movie ends with its discovery; each teases the unraveling of the greatest lie ever told. When Damon Lindelof’s Watchmen series picks up the story almost 35 years later, the terrible truth of what Adrian Veidt did will hang over everyone and everything. Along with the memory of a giant alien squid.