WARHAMMER 40K's ROGUE TRADER is Back After 31 Years - Nerdist

WARHAMMER 40K’s ROGUE TRADER is Back After 31 Years

Rogue Trader was originally released way back in 1987. It’s part of the fabric of Warhammer 40,000 but it’s also uniquely alien. This was a skirmish game where you fielded a small model count and explored a plot manufactured by a GM. You could customize units and spend an entire summer tinkering with gear and vehicle lists for your army. Man, those were the days.

A rogue trader is a privateer sanctioned by the Emperor to explore the fringe of the galaxy. They operate with both tongue and lasgun, settling planets and cleansing the stain of chaos wherever it may be. They’re the closest thing we have to a 40k pirate. If that doesn’t set your loins aflame we can’t be friends.

I never thought I’d see Rogue Trader again. Fortunately, Kill Team has taken off like a Thunderhawk gunship in heat. It has proven the perfect opportunity for this product to launch from out of the void. We can now be 40K pirates again.

Let’s talk about what this is, because it’s sort of confusing. This is a big box expansion to the recently released Kill Team. It requires you own the core rules to that stellar skirmish game, supplementing that dense rules manual with another abbreviated text. Here we have custom modifications for interior close-quarters combat. There are detailed mechanisms for opening and closing doors, working out line-of-sight with walls, and utilizing vents and the like to maneuver around a cramped battlefield.

The two new environments are stellar. They produce an altogether different feel than what we’ve seen in the Sector Imperialis. New tactics supplement the in your face carnage and it’s all wrapped together with a wonderful set of scenarios. 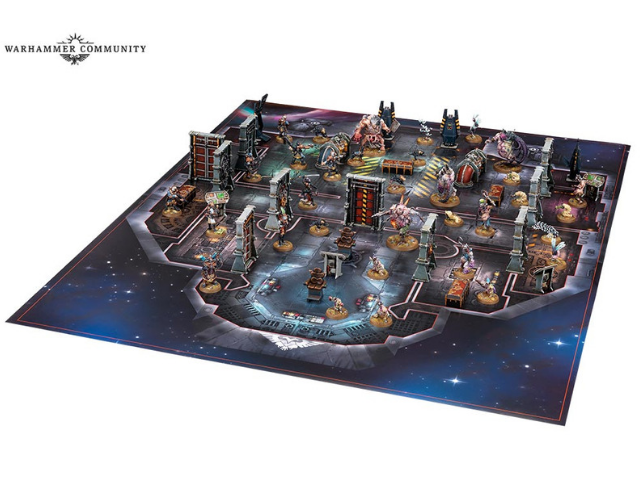 It’s hard to reason whether the new Killzones or kill teams are the main attraction. The Gellerpox Infected offer an alternative Nurgle force of bio-chaotic monstrosities. They’re terrifying and feature a rash of large sized hulks as well several swarms of insectoid terrors.

But the Gellerpox sit in the shadow of the expansion’s namesake. The rogue trader team known as the Elucidian Starstriders is simply magnificent. This group of eight individuals bleeds cool. You have a badass female, Elucia Vhane, who could give Boba Fett a run for his money. Beyond the champion of the group we have several other men and women as well as a mixture of nationalities. The sheer variety in representation is fantastic and lends an air of allure to the outfit. Sit back and watch as players fight over who gets to play them in the campaign.

Supporting the two leaders of each of these factions is a sample of rules from the upcoming Commanders expansion. This allows you to field standout characters with their own specialisms and abilities. They won’t dwarf the members of your kill team, but they’ll certainly prove a beacon for warriors to hover around. Of particular enjoyment is the incentive to take these VIPs out of action due to bonus experience offered to would-be-assassins. This makes wielding them as well as combating their presence both exciting and of interest.

This expansion comes together quite well. The new missions highlight the box’s narrative splendidly. You’re able to recreate the horrors encountered by the Starstriders while battling Vulgrar Thrice-Cursed’s cadre of bloated mutants.

However, it is apparent that wrapping the release in a pre-existing novella of material is both admirable and perplexing. It immediately stokes the fire of your imagination, generating buy-in and successfully investing you in these brand new characters. But it also provides some real limitations to integrating this material into your ongoing Kill Team campaign.

Utilizing the Kill Zones of a spaceship interior and Imperial shrine is not difficult. The scenarios offered in the Rogue Trader manual are generic and could include any two opposing forces. They set up quickly due to a smaller amount of terrain and will provide unique experiences when contrasting with the other environs.

Running the kill teams is a different matter. If you forego narrative cues and use the rogue traders as a generic bunch you sacrifice the most interesting parts of this faction. You lose the benefit of the specific datacards for Elucia Vhane and others, but you don’t have to jump through hoops to explain how they ended up in a warzone with rampaging Orks and Eldar. Additionally, if you have two players both wanting to run the group, you basically have no recourse but to lean on the generic profiles. Or you could simply run them as is and either allow a single person to play the faction, or say lore be damned and allow two mirror units.

The upshot is that the personality and unique identity the product works so hard to forge is very specific, lending itself best to serving as a standalone experience, outside normal Kill Team play.

Fortunately, this route is extremely satisfying. You can run through a series of narrative scenarios that recreate the included fiction with a contained campaign. This proves wild and entertaining as you field larger than life characters and clash with wondrous brutality. As a diversion from the norm, it’s simply magnificent and unlike anything we’ve seen from Games Workshop in this theater.

The product is wrapped up nicely by tying the new kill teams into the larger 40k world. Two codices accompany the quick play 8th edition rules pamphlet, offering everything needed to tease that interest out of a newcomer. This was a sly maneuver as it’s a natural evolution of a Kill Team player and works in parallel with the line’s interests.

Rogue Trader is a very exciting package. While you could certainly complain about the strategic decision to focus the box on named groups with specific characters, it ultimately works very well. It functions strongly as a standalone cluster of scenarios and well enough as an additional vector in an existing campaign. This is one of the most interesting and singular releases Games Workshop has produced in recent years – Kill Team is better for it.

Are you excited for Rogue Trader? Let us know in the comments!  And be sure to join host Becca Scott on Game the Game every Thursday here on Geek & Sundry to watch the best boardgames played with fantastic guests!