Warhammer 40k vs. Shadow War: Armageddon - Which Is Right For You? - Nerdist

Warhammer 40k vs. Shadow War: Armageddon – Which Is Right For You?

The year is only halfway over and Games Workshop has been cleaning up. Shadow War: Armageddon flew off the shelves, selling out immediately upon release. Warhammer 40k 8th edition hit the ground running and is wallowing in accolades. With Shadespire on the horizon, this may very well be the year of G-dub.

The problem with all of these miniatures games is that getting into them as a newcomer is rough. You see ‘em on the shelf and they’re glowing in sex appeal. Instead of taking a confident leap you kind of shuffle your feet and look away like a toddler shoved towards a mall Santa. The good news is this Claus doesn’t reek of vodka and is clean shaven.

The 40k setting is outstanding and bursting with flavor and history. The miniatures are top of the line and know no peer. Do you go headlong into 8th edition and drop fat stacks of dough on a new army? Or do you keep things simple and just grab that squad box so you can get in on the Shadow War on hive world Armageddon. Let me take your power fist and lead you to water.

Before we discuss the rule systems of each game, which are substantially different, we need to tackle the physical entry-point. With 40k you have two primary options. The first is to pick up the glorious Dark Imperium boxed set and utilize the included Primaris Space Marines or Chaos Death Guard as a jumping off point for a larger force. This is an expensive proposition but it gets you the rules, dice, and an extra faction of minis you could supply to a friend or sell-off to recoup some skrilla. The more conservative approach is to buy whatever damn army you want to field and the accompanying index containing all of the unit rules for said legion of death. You will still probably want to purchase the hardback deluxe rulebook which includes desirable advanced options not found in the free online version. Plus you get some exceptional background information and insane illustrations peppering every other page.

Shadow War is the more difficult sell. It arrived with a fantastic boxed set including complete squads of both Orks and Space Marine Scouts. It also happened to be absolutely jam-packed with selections of the new Sector Mechanicus terrain line. This just so happens to be the best plastic terrain that’s ever been released. 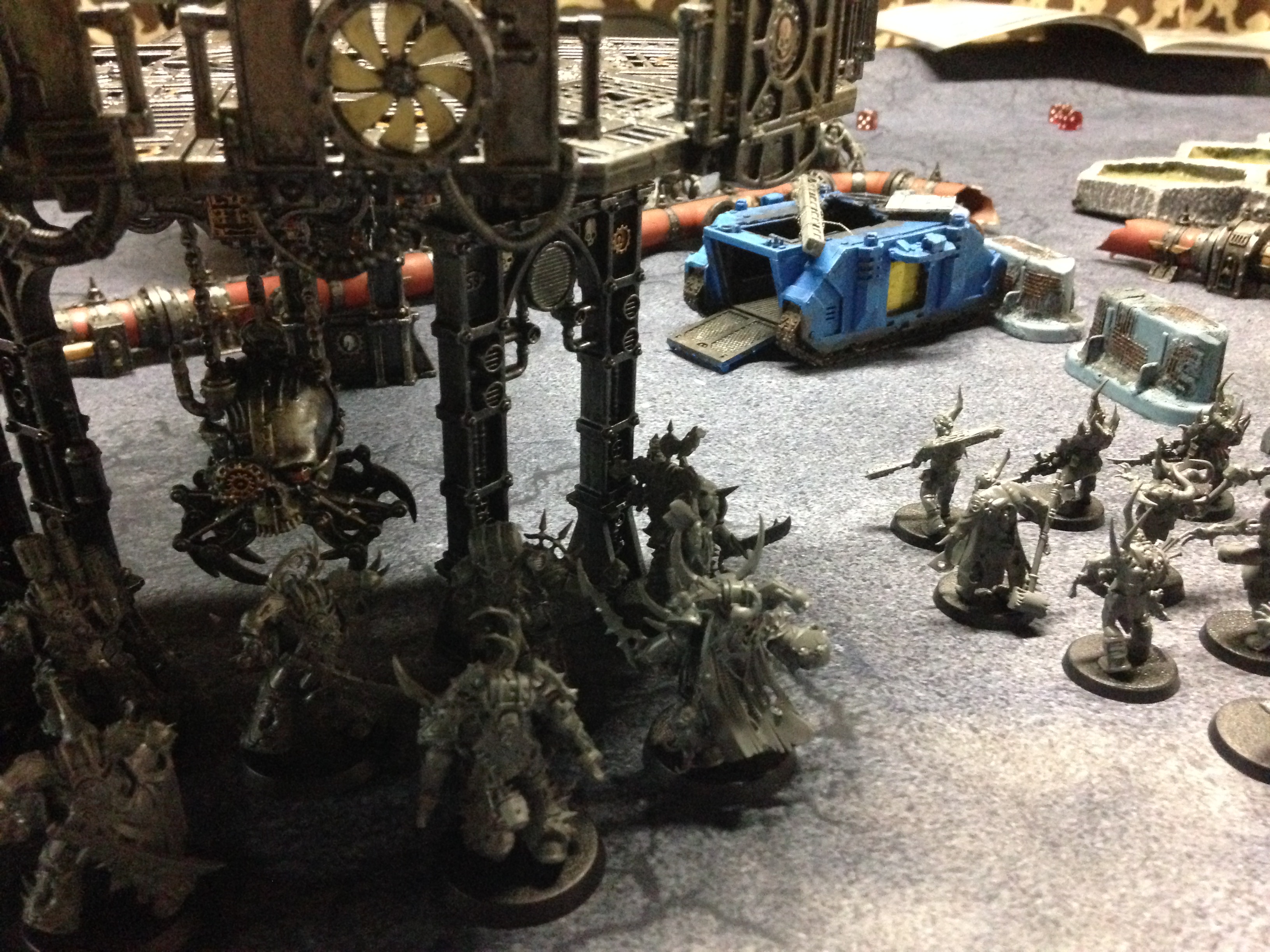 The problem here is that demand was unexpectedly high and the Shadow War: Armageddon box was a limited run. That’s long gone and tracking one down at your hobby shop is akin to hitting a BINGO on the first three balls (I’ve been watching a lot of Better Call Saul lately). The new softcover rulebook is available at retail and includes all of the kill team references for a multitude of factions. This is not a terrible deal as the entry cost is substantially lower than 40k in sheer printed material alone. The catch is that Shadow War will require roughly two or three times the amount of terrain on your table comparatively speaking. Yes, you’ll save a great deal of time and money when you’re only fielding 10 or so little plastic dudes, but it’s quickly eaten up by the mountains of industrial bulkheads and towers you’ll need to cram into that 4×4 playing surface.

Warhammer 40k 8th edition shares little in common with Shadow War. The former is a re-working of the previous editions of the flagship line. It’s a streamlining similar in approach to Age of Sigmar rebooting the Old World. The game moves quickly while allowing you to field a large number of troops.

Shadow War is a revised Necromunda—Games Workshop’s classic gang warfare skirmish game—which in itself is based on the deprecated 40k 2nd edition. While the rules have a few rusted vestiges, they still actually work quite well for man-to-man combat at this scale. The detail is pretty granular but it’s an easy to digest rule set once you’ve gotten a couple of games in. You have resolution systems that include pinning targets more often than actually wounding them, the ability to fall from high structures, and a huge toy-factor as you can equip a wide range of gear on your combatants. While the ruleset is a little more plodding, the overall length of play is typically shorter than its competitor. Losing just a couple of warriors can result in your entire kill team bottling out and fleeing the battlefield.

From a wide lens both are actually relatively similar. They rely on uniform stats such as ballistic skill and leadership, and they both feature an IGOUGO system where each side activates all of their elements before the other. They of course have the same general setting despite some timeline shifting in 8th edition. Both deliver flavor and impact.

When you drill down and really get your flak armor dirty, you will realize the main ripples of the differences in scope. The primary divergence is in how the designers expect you to interact with the product and experience the full game. 40k is about large scaled battles focused on narrative or competition. While it’s possible to link multiple games together, that’s not really the norm. Shadow War is about growth and the story of your kill team’s evolution. Campaign play, which is pretty much the standard, means you acquire additional gear as well as skills for your troopers. It has an RPG-like feel with that sense of ownership and advancement. It’s a little more personal at the expense of the grandeur. More grit and mucking it out as opposed to fireworks and world-beating. 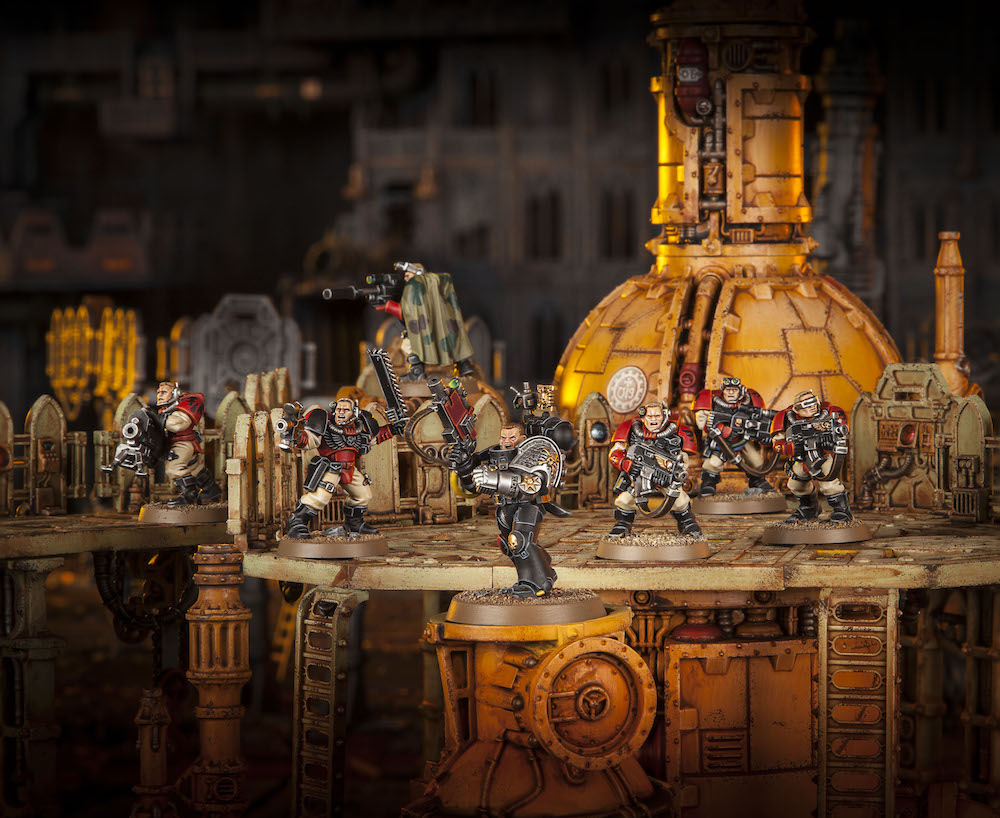 The final element to consider is the future of each line and how you will integrate that purchase with actually getting the game played. 40k 8th will undoubtedly be supported with new content on the regular as its Games Workshop’s primary title. Shadow War appears to be put on the back burner and may very well receive no additional content or releases. This is partially fueled by economics as well as the communities themselves. You will have a harder time finding a Shadow War group at your local hobby shop but it will require no effort to find a 40k league.

Despite this challenge, Shadow War does have one longstanding advantage over its peer. The fact that each faction can be played with a single unit box purchase means it will be trivial to convince your friends to join in the fun. If you plan on the majority of your play being within the comforts of your cold dark basement, then you could even manage to acquire several squads and provide the units for your opponents to field. The smaller buy-in means the barriers are much more reasonable and conversion more likely.

Whether that’s really enough to make up for the waning popularity is up for debate. At this point I’m not sure that really matters as you’ve probably made up your mind. Both systems are truly wonderful and will provide limitless hours of entertainment. Now is a prime time to close your eyes and leap. Just don’t make the wrong choice or you may be out half your retirement fund and scrounging half-eaten Big Macs from a dumpster while all that expensive plastic collects dust.

Are you looking to dive into 40k or Shadow War: Armageddon? Let us know in the comments!

In addition to Geek & Sundry, Charlie Theel writes for Miniature Market’s The Review Corner and co-hosts the gaming podcast Ding & Dent. You can find him on Twitter @CharlieTheel