Did WANDAVISION Hint at an MCU Fantastic Four? - Nerdist

Did WANDAVISION Hint at an MCU Fantastic Four?

WandaVision has got us all hooked into its mysteries, and our minds are reeling at all the MCU possibilities this series might reveal. Is Wanda’s brother Quicksilver going to show up? What about Wonder Man?  Is nosy neighbor Agnes actually the witch Agatha Harkness? Just how much House of M stuff is really going on here??

Well, if all of those theories were not enough to obsess over, we’ve got a new one for you. We think that WandaVision just stealthily introduced the MCU version of the Fantastic Four. The clues sure are adding up, and in today’s Nerdist News, Dan Casey breaks it all down for us:

In episode four of WandaVision, titled “We Interrupt this Program,” we got our first good look at the MCU version of S.W.O.R.D., the Sentient Weapon Observation and Response Division. As we learned in the episode, S.W.O.R.D. had a whole section devoted to missions in outer space. Sadly, that space division is not what it once was.

In a post-Blip world, S.W.O.R.D.’s Acting Director Tyler Hayward reveals that their space program was dismantled after Thanos’ snap. Viable candidates as astronauts are now in short supply. “Lost half my personnel in the Blip, and half of those remaining have lost their nerve,” according to Hayward. As Marvel fans know, the Fantastic Four gain their powers while on a space mission, when bombarded with cosmic rays. We think it’s likely that the MCU versions of the FF will be astronauts in the employment of S.W.O.R.D. 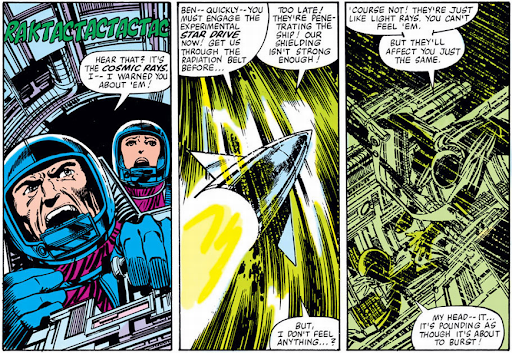 This could play out all kids of way. They could be astronauts who received their powers during the Snap, only later thought lost during the Blip. Or, due to lack of trained astronauts, it would make sense why S.W.O.R.D. would be desperate enough to let a genius scientist, his grad student girlfriend, her teenage brother, and their pilot friend from the Lower East Side actually man one of their missions.

In any case, we’d bet you five Infinity Stones that when the Fantastic Four are eventually revealed, they will be a part of S.W.O.R.D. Wild to think a show about a witch and her robot husband living in a sitcom is their gateway in. That’s just the wildly intricate construction of the Marvel Cinematic Universe these days.