The initial things we heard about Marvel’s WandaVision seemed fun. It’s a sitcom pastiche in the Marvel Cinematic Universe. A pretty silly concept, but with Elizabeth Olsen and Paul Bettany on board, it seemed like it would be watchable. Now, as we approach the final three episodes of the series, we know the truth: WandaVision is the most disturbing thing they’ve ever done. And it’s not like the sitcom parodies went away after a bit; if anything, the parodies allow for even scarier moments. They’re familiar, ingrained in our televisual being, but, through moments of the uncanny, are something much more sinister. 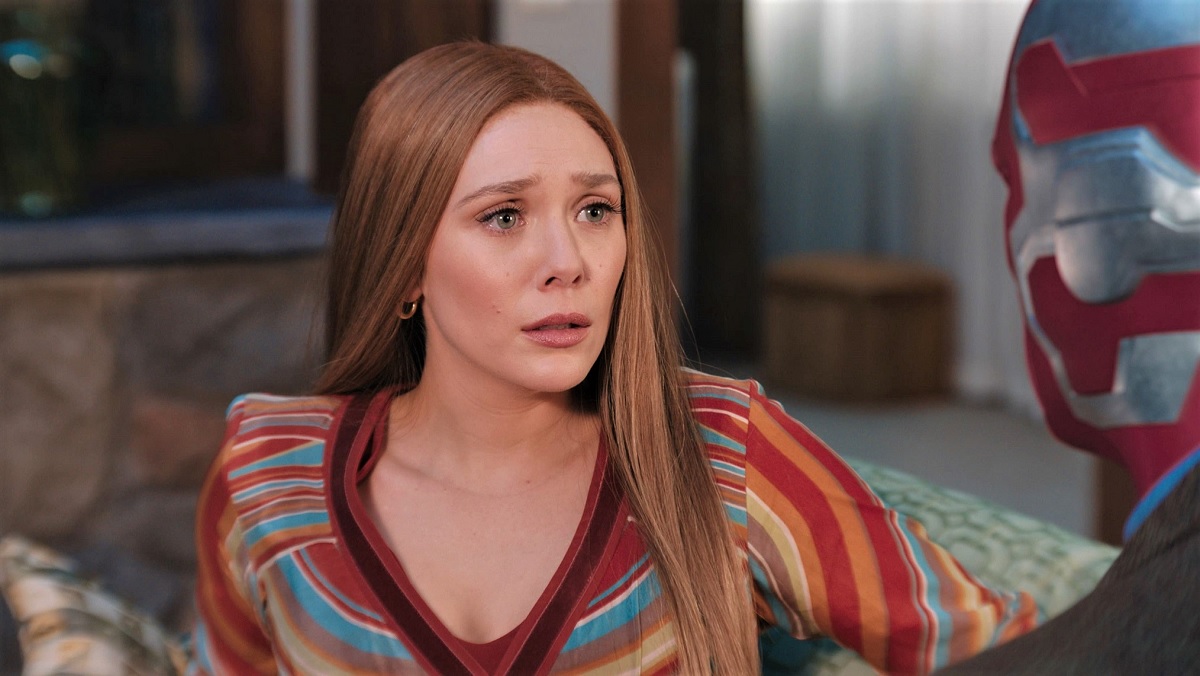 We’ve obviously talked a lot here on Nerdist about the in-universe plot that we see unfold week after week; someone or something has trapped the citizens of Westview, New Jersey in a magically induced TV show. All of this is either at the expressed wish of Wanda Maximoff or perhaps as a gift to her. Look, Mephisto’s gonna show up, we all know it. But because WandaVision has to convey the mystery of the situation, and imply the presence of some larger malevolent force, we get ever-creepier moments which lift the veneer.

Wanda clearly wants the “perfect” version of Americana, and in a very David Lynch way, WandaVision gives us both the cloyingly wholesome and existentially upsetting. Throughout the first few episodes, the sitcom pastiches were specifically shows about wholesomeness. I Love Lucy, The Dick Van Dyke Show, Family Ties. Even when those shows had their “real” moments, they were all about what it means to be the normal nuclear family of the ’50s, ’60s, and ’80s respectively. But each version of the Vision family home set, we know, isn’t normal—or even real. 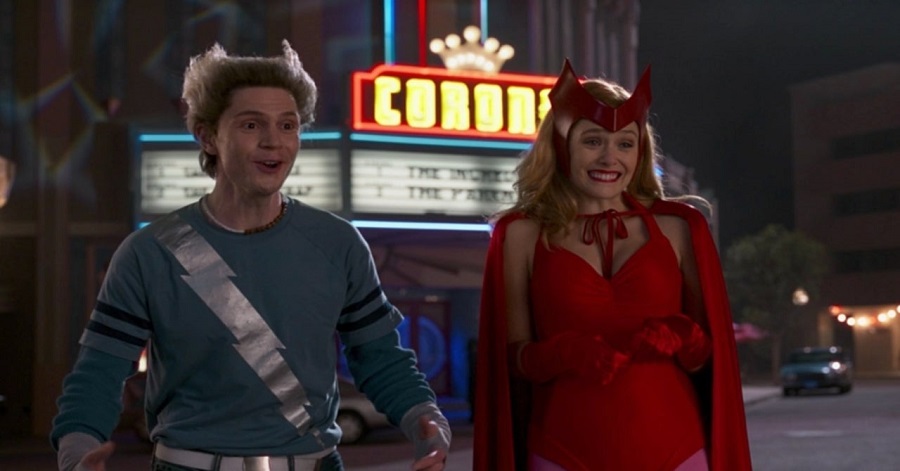 Through the brilliant set design and costuming, the series uses nostalgia to point out the artificiality of this kind of “perfect” family. The only problems are you haven’t prepared for your boss to come over for dinner, or you want to make a good first impression with the town’s planning committee. It’s simple stuff, easily wrapped up in 30 minutes. But we know that’s not all there is. Throughout the first three episodes there are those moments when the “real” starts to seep in. These moments jar the characters, break the artifice of the sitcom, and result in looks of abject terror. But all too quickly, they go back to regularly scheduled programming.

For those first three episodes, I thought it worked well enough. The pastiches were the draw, and the moments of unease added to the mystery. Vision’s boss questions their reality; a beekeeper crawls up from a manhole cover; Wanda finds a helicopter in color. They’re fun little moments! But then we started to get more moments, and for larger existential problems. Vision is dead; not just that, but we know Wanda stole his corpse from S.W.O.R.D. headquarters. Wanda seems to at once control the fictional world and live under its power. 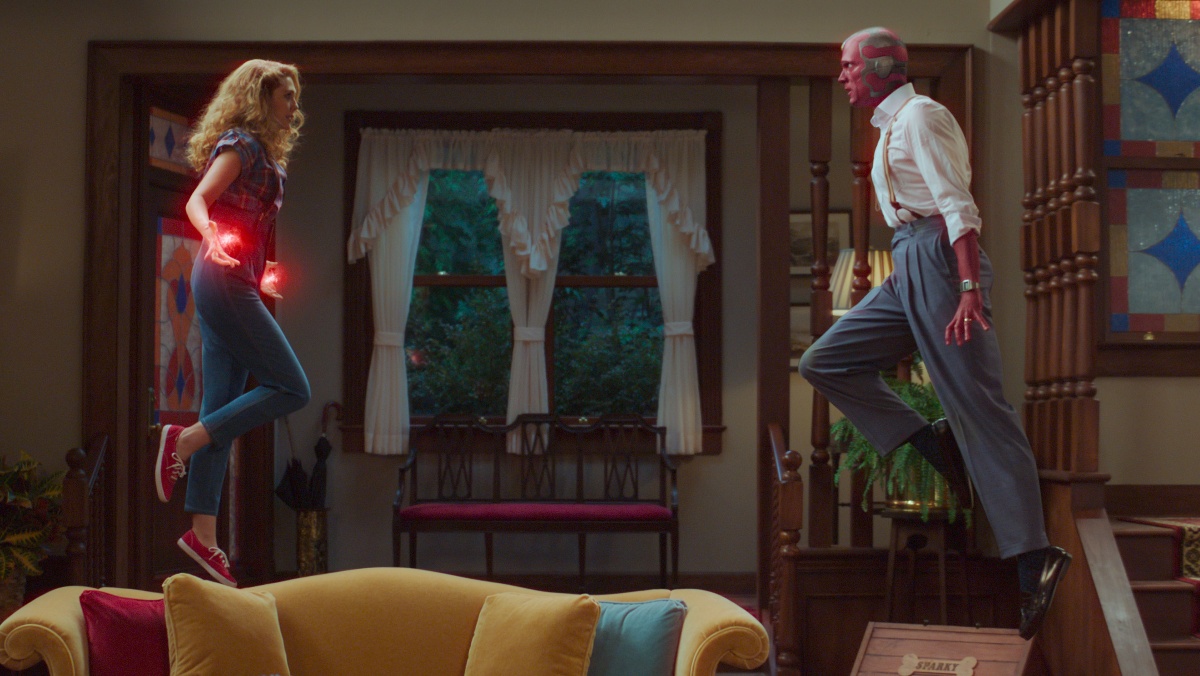 And it’s been in the last two episodes that have aired to date—“On a Very Special Episode…” and “All-New Halloween Spooktacular!”—that we’ve seen WandaVision fully turn toward the suburban macabre. As Monica Rambeau, Jimmy Woo, and Darcy Lewis learn about who the people of Westview really are, we begin to realize that they are fully trapped. Not only that, but they see Wanda (or whomever) as the vindictive god they have to placate. They’ve seen Wanda fling “Geraldine” out of their reality.

Wanda is truly terrifying, but she’s also terrified. She seems fully committed to the facade of this sitcom reality if it means she can stay with Vision. But it’s also spinning completely out of control. In the course of one episode she becomes pregnant and then gives birth. In another, her twins go from babies to kindergartners to pre-teens in a flash. She’s only in control in as much as it seems she can dictate the “reality” of the un-reality. Agnes and Norm ask if she needs them to retake a line or two. This is a moment of uncanny reality, and she knows it, but also can’t really stop it either way.

As one would hope for a Halloween episode, “All-New Halloween Spooktacular!” might be one of the most unsettling TV episodes I’ve seen in a long time. The ominous lyrics to the 2000s-sitcom theme; the claymation commercial that starts out simply exaggerated and becomes a grotesque reflection of the futility of time; the sheer fact that Vision doesn’t know what an Avenger is. It’s all not quite right. Pietro isn’t really Pietro, and he’s dead either way.

Vision’s quest around Westview, out of Wanda’s field of view, reveals the gut-wrenching truth of the situation: if Wanda’s not around to create the narrative, the townsfolk are just frozen. Their lives aren’t even fictional; they’re nothing. We thought the sitcom characters had it bad, but at least they have some kind of life. There weren’t even any other children until this episode, when Wanda deemed them necessary. It’s got a very Brechtian or Pirandelloan melancholy about it; they need Wanda to even have the paltry life she gives them. 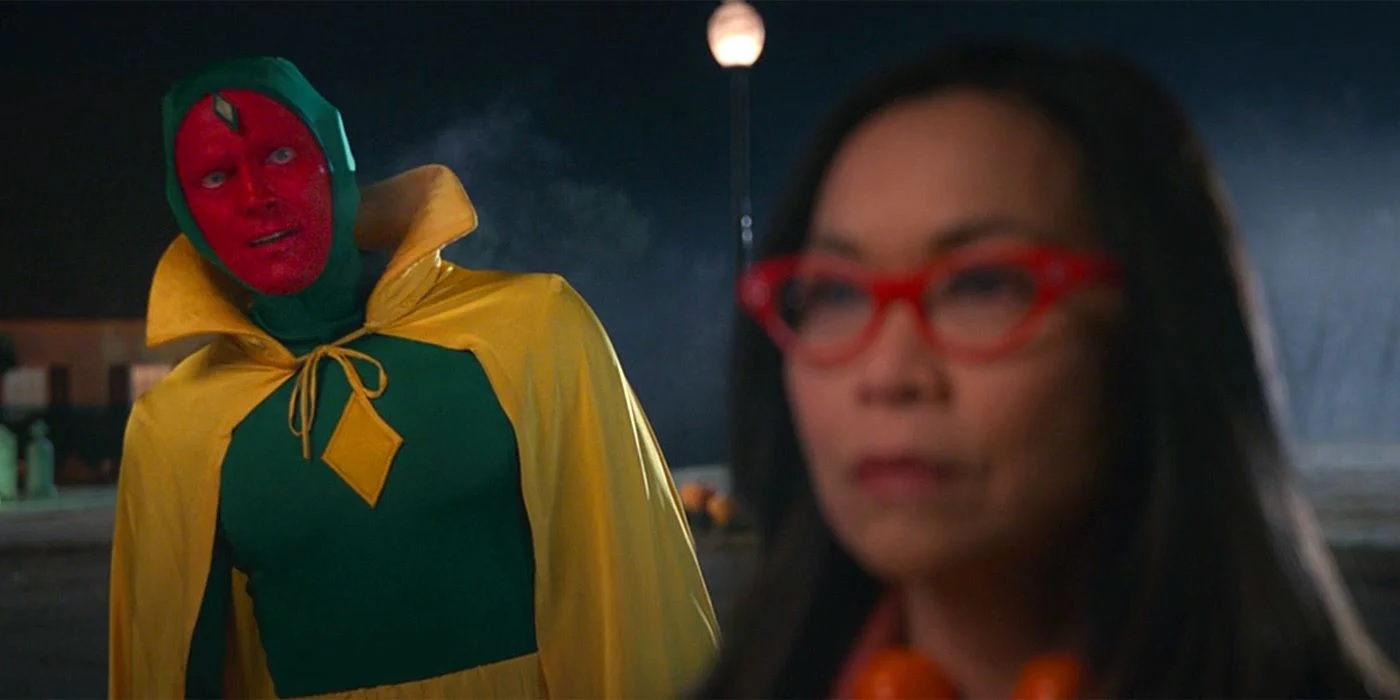 We already know the Hex field has some kind of cellular impact, and now we know even on the inside, people are more or less doomed. And now it’s even larger, even more people have succumbed to its reality-skewing properties. Even Wanda’s tenuous grasp on that fictional reality seems poised to slip further in the coming episodes. Wanda is both god-creator and cog in whatever machine this is. It feeds on grief, which is the only thing she has a lot of. But what she doesn’t have is time; there’s only so many decades of television history to live through.