THE WALKING DEAD Midseason Premiere Will Upset and Confuse Fans

A few months ago, The Walking Dead left fans with a major cliffhanger. Carol’s incessant thirst for revenge led to her, Daryl, Connie, Aaron, Magna, Jerry, and Kelly getting caught in a cave filled with walkers (courtesy of Alpha). Who will live? Who will die? What else is in this cave? Those questions (and more) were answered in mid-season premiere, which picks up right where the story left off.

The entire situation was undoubtedly a means to get Carol to finally stop acting on impulse. Frankly, if this doesn’t make her stop acting like a complete fool, then nothing will at this point. Everyone on this show has had their share of “not so bright” decisions that have led to major consequences, but Carol’s actions are completely without any sense of rationale.

The events that transpire during their escape mission quickly become infuriating after taking a sharp turn for the worse. In a world where there are infinite ways to progress a character’s story or take them on some sort of emotional journey, The Walking Dead goes back to the same exhausting formula. 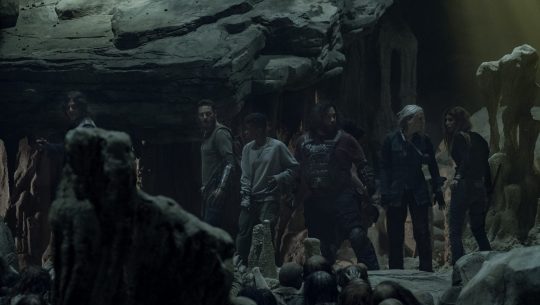 It’s not shocking for awful things to happen on an apocalypse show, especially in the middle of a brewing conflict, but that doesn’t mean this blow will be any less devastating to a lot of viewers. Discord among The Walking Dead‘s fervent fandom is a way of life and I can already see the dark clouds on the horizon.

There will probably be a share of theories to suggest some alternatives to what is being presented in the show, but it’s not likely considering that there was backlash to fake-outs in the past. In the show’s universe, Carol’s strained relationships with pretty much everyone just became infinitely worse.

Outside of the cave debacle that lasted a little too long, there’s a small yet significant update inside the Whisperer camp. The growing dissension and suspicions among the pack are addressed before things go in an aggressively disturbing and weird direction. I say with full confidence that there isn’t a fan of the show (or comics) who won’t be scratching their heads and left feeling very, very unsettled by an odd encounter in the woods.

The subsequent episode finally starts to move this Whisperer war forward as it deals with the fallout from the midseason premiere’s events and starts a new conflict. A lot more happens than expected with action that brings to mind those great murderer Rick moments from the past, bait and switch trickery, a quick catch-up with some familiar faces, and a few intense one-on-one battles. 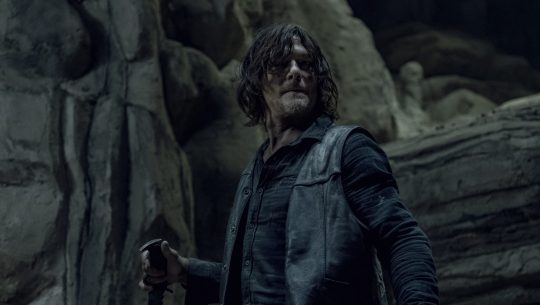 It would all be a much more intense affair if it wasn’t for obvious plot armor as well as 10B photos that confirm certain characters’ survival. That’s the price we pay in today’s TV universe where far too much is revealed ahead of time. Everyone is starting to unravel in their own ways and this time there’s no Rick or Michonne to reel people back in. The ending might leave some folks screaming “Whyyyyy?!” as they wait impatiently for another episode.

The Walking Dead‘s midseason premiere and its follow up are the beginning of an end with far too many goodbyes and painful moments as the long-running show shuffles to its next chapter.

TAGGED: the whisperers, The Walking Dead