We Put Viennetta to the Taste Test Ahead of US Return

Read our review of Good Humor’s Viennetta below.

I’m about to anger many of you. I don’t like ice cream cake. It has a weird texture and defrosts from rock solid and inedible to a mushy mess in the time it takes you to finish one bite. It’s considerably less appetizing than both actual ice cream and actual cake. And yet, even I am excited for the newest treat coming to your grocer’s frozen section. Because it’s not a new type of ice cream cake at all. It’s an old one making a glorious return. Viennetta and its shapely folds are coming back to the US.

Unilever announced in a press release (in news we first saw at The Takeout) that this year it will resurrect the most elegant ice cream cake of the 20th century. Good Humor is bringing back the memorable Viennetta to US stores, thanks to fan demand for the fancy frozen feast. 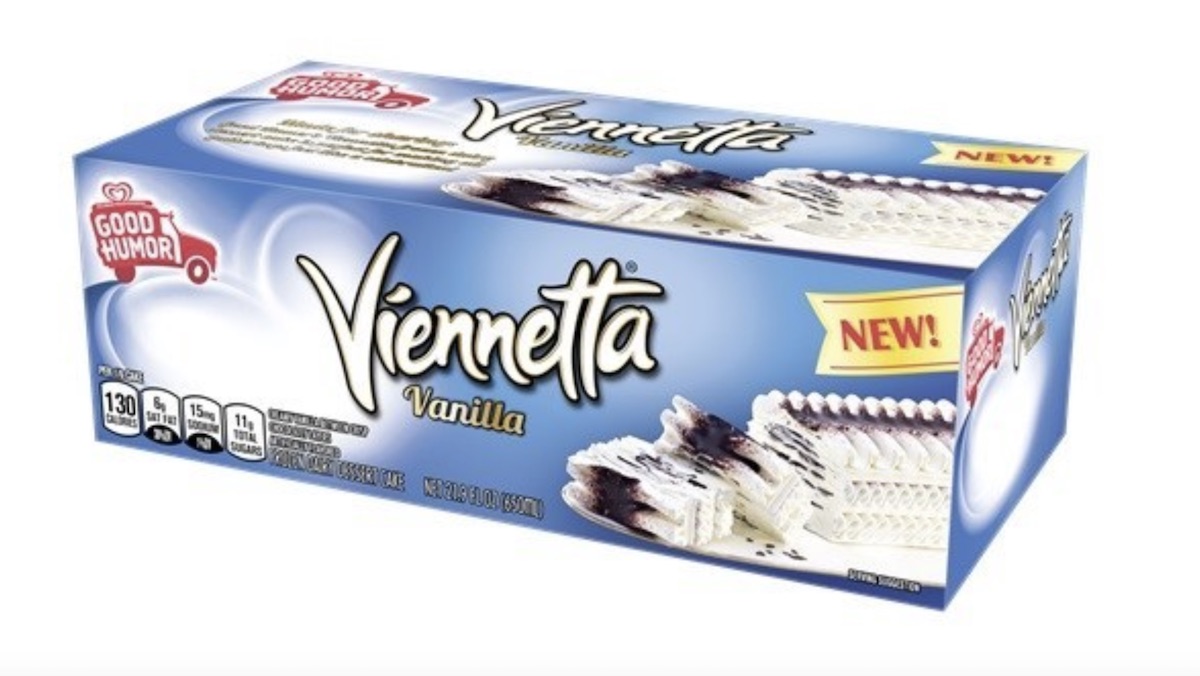 For those of you too young to remember the ads, Viennetta was billed as a high-end dessert. It certainly looks like one, with its smooth design. And it’s definitely more comely than typical ice cream cakes. The Viennetta “combines a wavy frozen vanilla base between crispy, decadent chocolate layers in a unique cake shape that is perfectly portioned for an entire family to share.”

Okay, sure. But that’s like describing the Mona Lisa as a painting of a woman. Yes, it’s technically accurate. However, it fails to capture the true ethos of the Viennetta, which presented itself as something special. Fortunately, this video does captures the dessert’s allure.

Legally required to post this video any time Viennetta is in the tweets. pic.twitter.com/OC6bgxbPNQ

And I will. Because while I may not like ice cream cake, that could be because I never got to try Viennetta as a kid. Maybe I just needed a fancier version.

UPDATE: And now I have. Unilever sent me a package of their new releases, which included the returning Viennetta. I’m embarrassed by how excited I was to open the box. In fairness though, this isn’t just any ice cream. This dessert only existed on my TV when I was a kid. And I had no reason to believe it would ever be anything more than a tantalizing treat I could never try. This was like finding a time machine. And I could use it go back and fix a culinary oversight from my past. 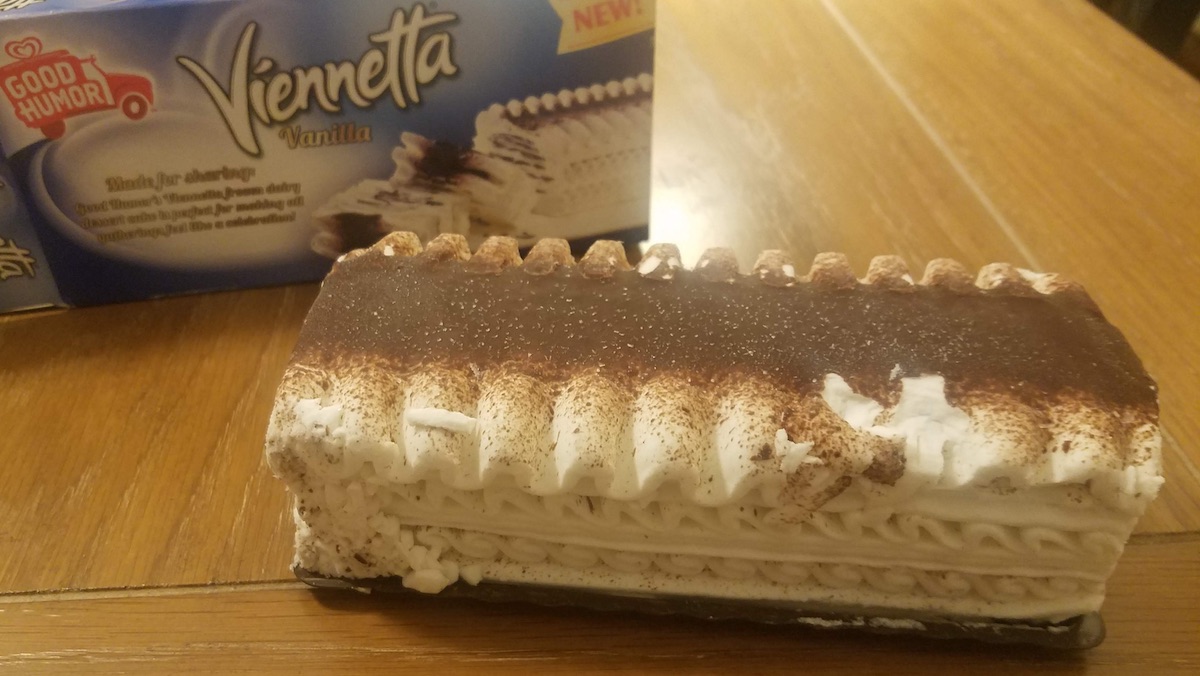 That wasn’t necessarily a good thing though. My previous decades-long anticipation of New Coke fizzled out in spectacular fashion. It’s hard to live up to hype built up over so many years. And my first reaction to the box wasn’t what I expected. The Viennetta is smaller than I imagined. The whole cake is seven-inches long by three-inches wide. And it stands about three-inches tall. Also, because it was delivered in a big box, it had been tossed around a bit. The elegant exterior had taken a slight beating.

It still looked real freaking fancy though. It’s unlike just about every other ice cream cake I’ve ever had. It was also easy to cut into slices. Based on the suggest serving size, it’s meant to be cut into six pieces. I think it’s better suited for four reasonable adults. Or just one writer at Nerdist with a big appetite. I definitely could have polished off this whole thing myself. Instead I showed a lot of restraint. I only ate about half. Only. 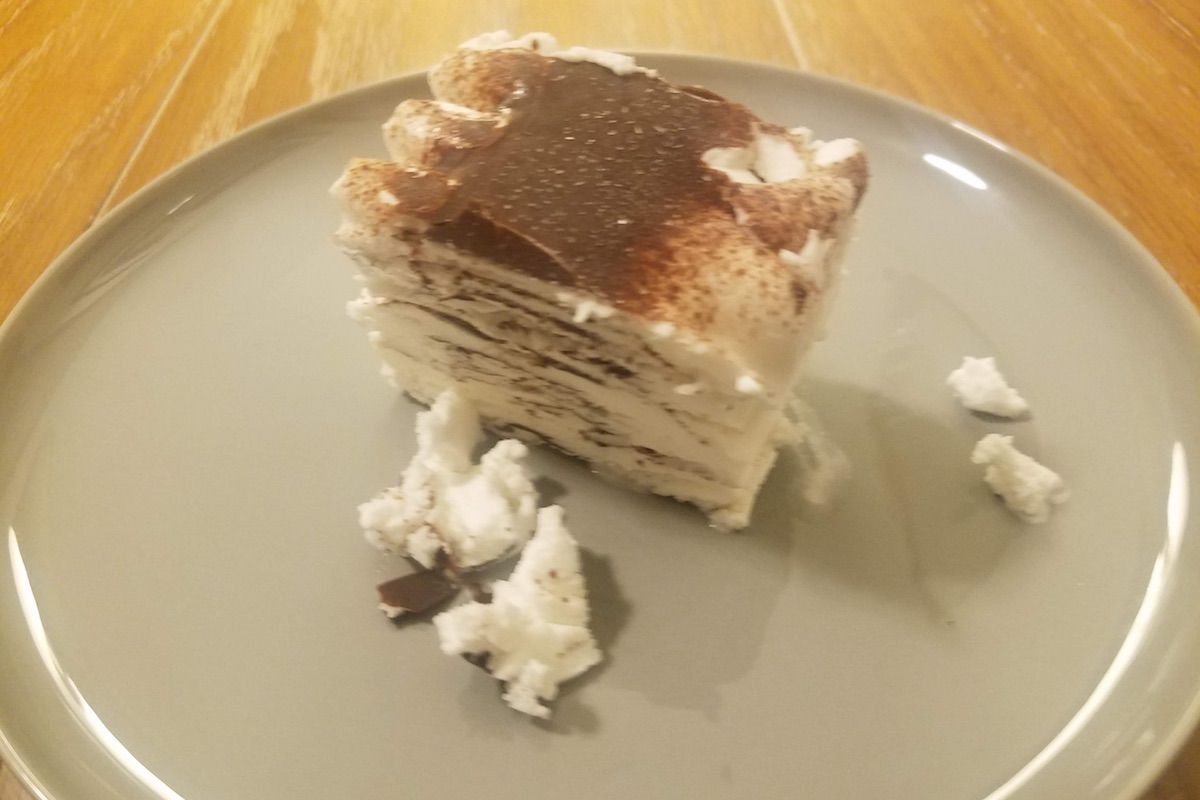 I didn’t expect to do that after my first bite. Like many ice cream cakes, the Viennetta has a different texture than most ice cream. The initial mouthfeel was a little weird. But thanks its signature waves—which are cool, though less pronounced then I expected—the Viennetta has a lightness that proved quite enjoyable. It got better as I got better used to it. And the more I ate it the more I liked it. And since I ate so much, it was nice not to feel sick. No tummy ache, despite having consumed so much.

What really makes the Vienneta work though is its thin layers of chocolate. They’re flaky and delicious, and combined with the vanilla ice cream offer a classic taste. It reminded me of another Good Humor product, a traditional Klondike bar. Only with chocolate thinly spread out into every bite. 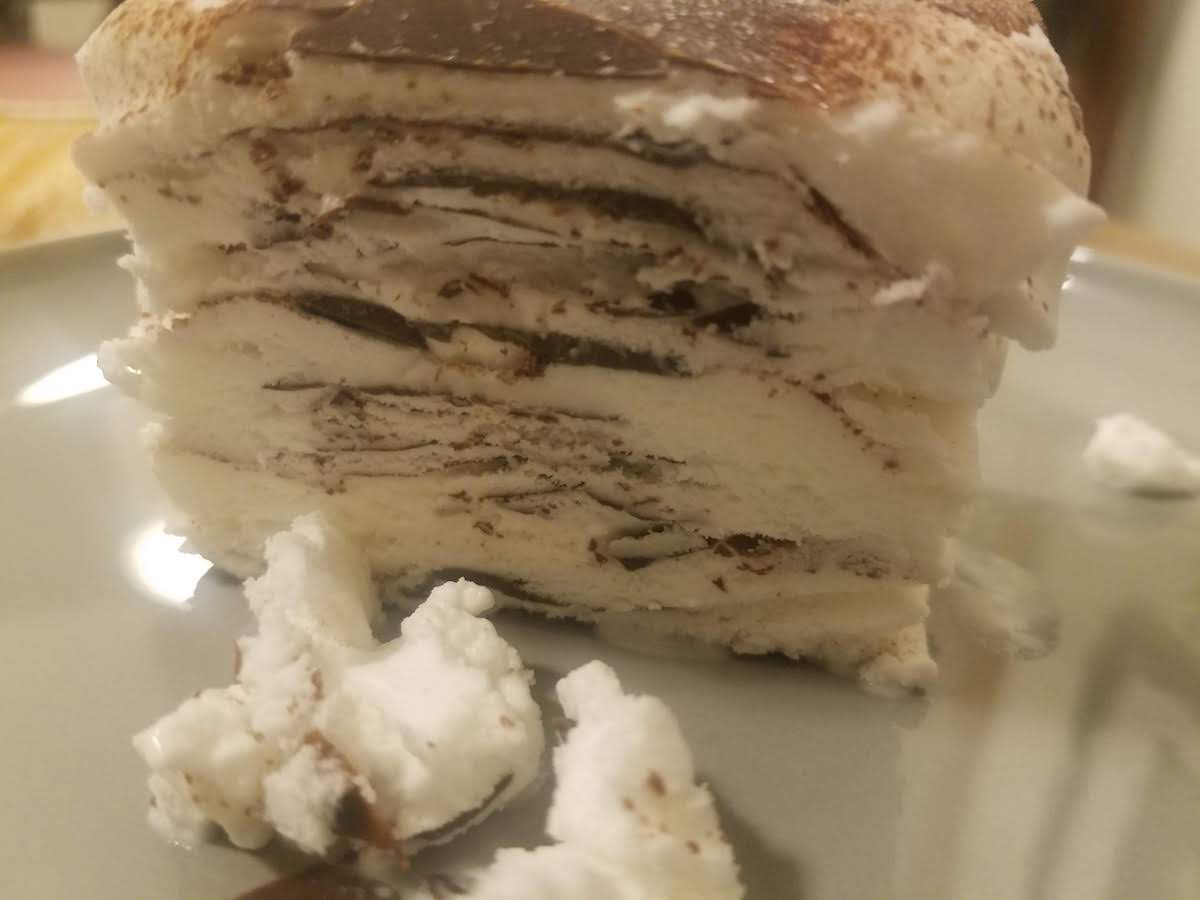 Would I bring one to a black-tie gala? No. The Viennetta looks great. But it’s not really the elegant dish those old commercials made it out to be. It’s still just an ice cream cake you can buy in your local grocer’s freezer. One that can be messy thanks to all that flaky chocolate.

But that’s a good thing. Tasty frozen treats should not be the exclusive purview of “fancy” people. Ice cream cake should be served at all kinds of party. Or enjoyed all by yourself when you want something tasty.

And I would very much like to have Viennetta again under either circumstance.