WWE Ice Cream Bars Are Back (And We Tried Them) - Nerdist

WWE Ice Cream Bars Are Back (And We Tried Them)

UPDATE: Good Humor’s WWE Superstars Cookie Sandwiches, a new take on the popular wrestling ice cream bars that were discontinued in 2009, are now available for home delivery in select cities around the country. And Nerdist got a chance to try them. Some might say we were way too excited about this, but those people obviously never had the originals. They were amazing. If you’re hoping to get the exact same experience from these new ones though you might be disappointed. But if you’re looking for a fantastic and satisfying treat you’re going to be very happy.

Their are two big differences between these new ice cream sandwiches and the old bars, one in flavor the other in texture. The old bars had a chocolate back. The sandwiches feature vanilla wafer cookies with a vanilla “frozen dairy dessert,” rather than actual ice cream. (That sounds like a bad thing but it’s not.) The flavor profile of the new sandwiches are a lot more one-note than the old bars were. 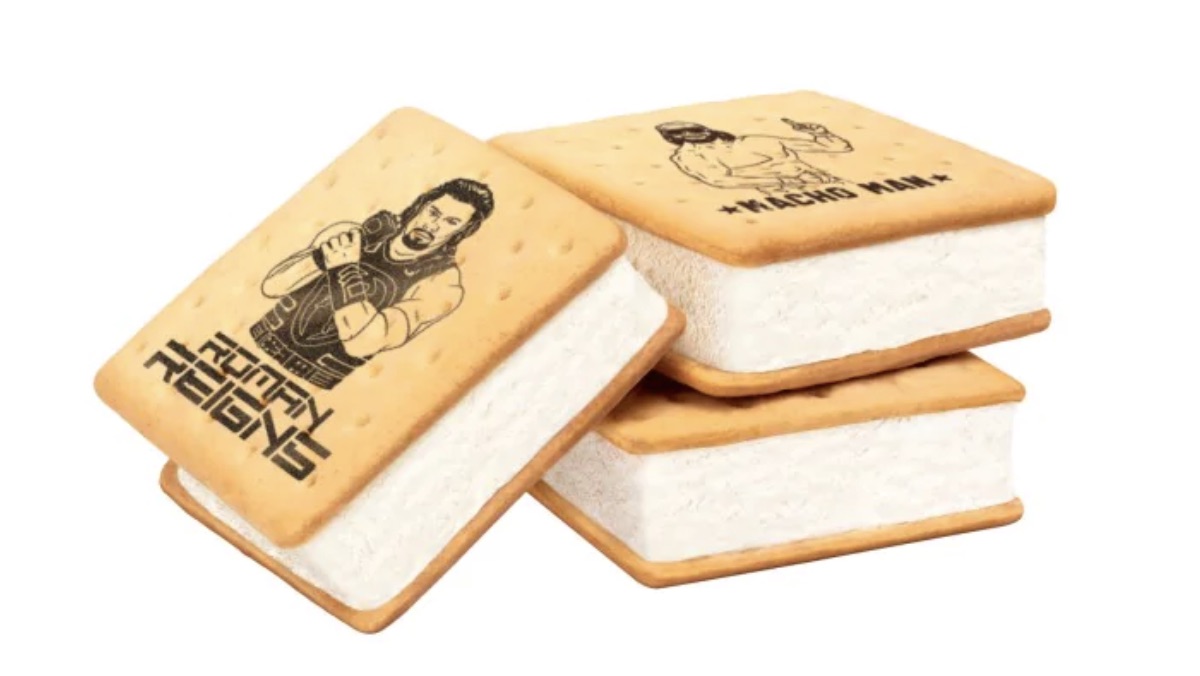 Also, the two vanilla wafer cookies are much softer than the old bar’s cookie was. (It’s been at least 11 years since we had the original, so we’re relying on our memory.) That creates a very different kind of bite. The old bars, which came on a stick, had that snap of classic ice cream bars. It was chewier. The new sandwiches are significantly lighter, and some of the vanilla wafer sticks to your fingers as you eat it. (Also, the wrestlers’ images are a lot fainter now but who cares.)

If you bite into a new WWE ice cream sandwich looking for the same taste and sensation you got when you ate the old bars, you’re going to be disappointed. But if you eat one looking for a delicious ice cream treat, you’re going to be very happy. The lighter “frozen dairy dessert” and softer cookies make for a less filling snack. They’re soft and satisfying, and will be ideal on a hot summer day. They aren’t too big, they aren’t too heavy, and they won’t melt before you can finish one. 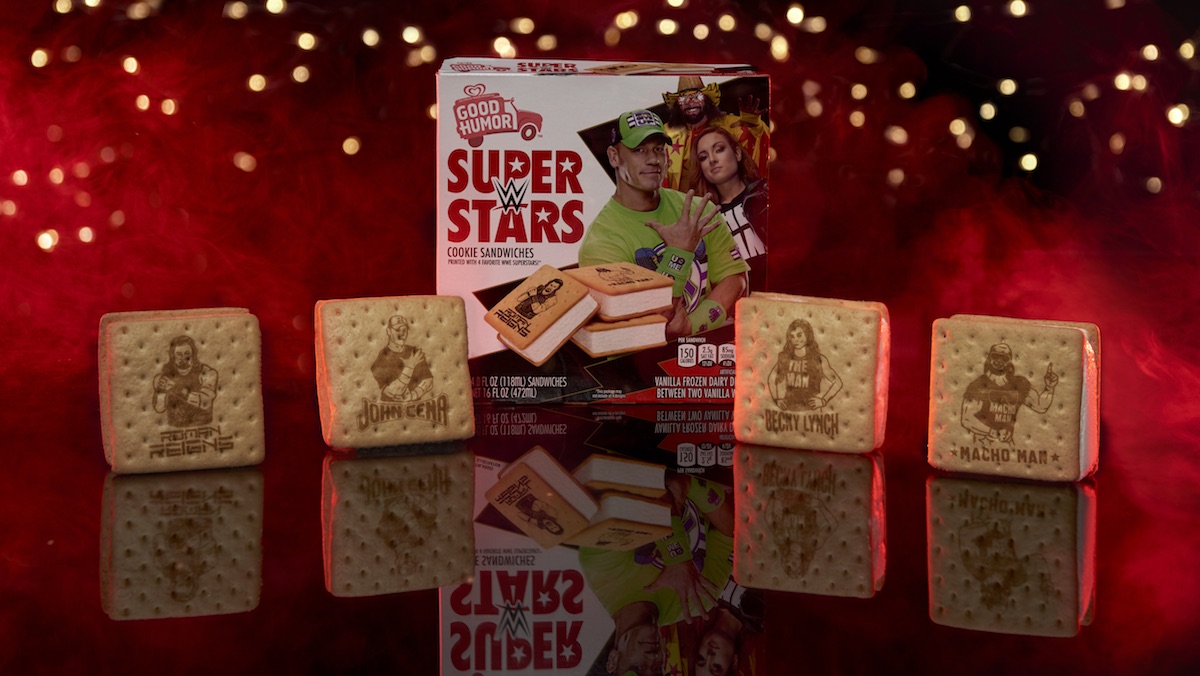 So while they aren’t the old bars we love, they’re pretty great unto themselves. And they’re really great if you’re looking for something sweet without chocolate, or for something cold and delicious that won’t give you a stomach ache.

They do have one thing in common with the originals though: we expect to eat about a million of them.

Good Humor WWE Superstars Cookie Sandwiches can now be ordered on-demand from the digital store The Ice Cream Shop. They are available in New York City, L.A., the Bay Area, San Diego, Boston, Chicago, South Florida, Philadelphia, and D.C.. You can order them through  UberEats,  Postmates,  Doordash, and  Grubhub platforms.

Original post: One of the best things about professional wrestling is when a beloved performer makes an unexpected comeback to the ring after a long time away. It’s always an incredible moment, combining nostalgia, excitement, and anticipation into one amazing surprise. This week saw arguably the greatest return in WWE history. It doesn’t take place anywhere near the squared circle, rather in the frozen department of your local grocer. The WWE’s wildly popular ice cream bars are coming back to stores for the first time in over a decade. But like a wrestler who gets a gimmick change, they’re a little bit different than we remember. 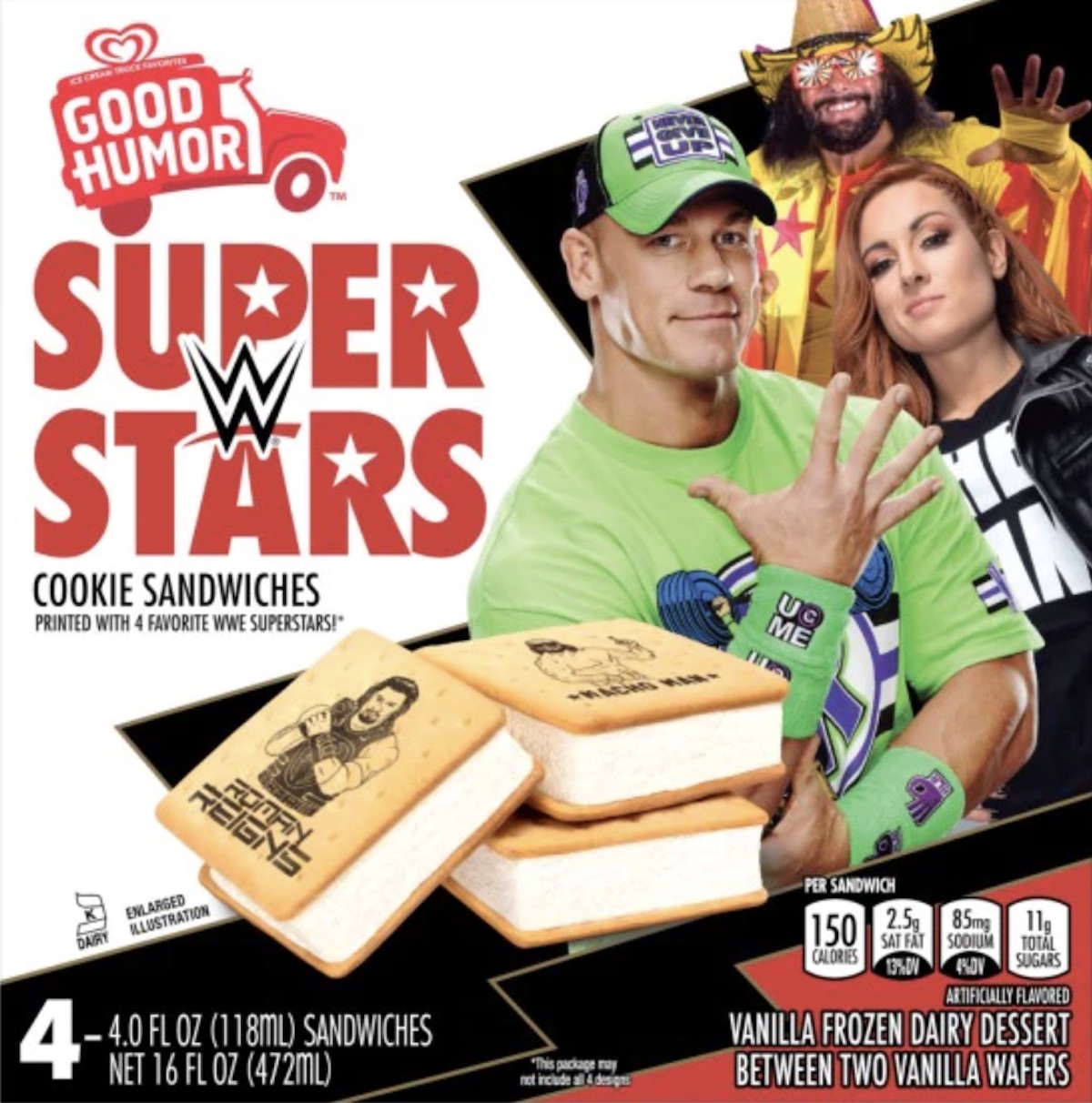 Good Humor’s website now includes a modern version of the classic WWE ice cream bar (news we first learned about at Uproxx). This is the first time they’ve been available since they were discontinued in 2009. But these are not exactly like the old bars. These are ice cream sandwiches with two major differences from their predecessors.

For one, there is no longer a stick. That one isn’t that big of a deal—it might even be an upgrade since you won’t get stuck holding garbage when you’re finished. However, unlike the classic bars, these do not feature a chocolate back. Both sides of this ice cream sandwich are cookies.

This might be a very big deal, but that doesn’t mean they won’t be amazing. The chocolate was an important part of the original, but the cookie sandwich front, where wrestler images will still be featured, were the true MVP of the WWE ice cream bar. If you’re going to omit the chocolate back, replacing it with a second amazing cookie could more than make up for it. I won’t know for sure until I eat one…hundred, which is exactly what I am going to do. (I wish I were kidding). You can search for when they will be available near you on Good Humor’s site.

Everyone you know who loved these is going to freak out when they hear this news. That might seem strange if you don’t like pro wrestling and never had one yourself. But you didn’t have to like professional wrestling to love them. You just had to like ice cream. There’s a reason people still go insane for them. As this video detailing the history of the WWE ice cream bars shows, fans still spend big bucks on just the packaging.These frozen treats even become part of a major WWE storyline in 2011. CM Punk demanded their return as part of his contract negotiations. He brought up their return multiple times, and every time he did the reaction from the crowd was overwhelming. Unfortunately the closest he got to making it a reality was a T-shirt of a bar with him on it.But now, after far too long of a wait, they are finally back. And it’s not just the best surprise return in pro wrestling history, it’s also the tastiest.