VICE Showcases All the Evils of Dick Cheney - Nerdist

VICE Showcases All the Evils of Dick Cheney

Iâ€™m not sure how well the world needs to â€œunderstandâ€ Dick Cheney, or how likely many will find themselves empathizing with the man who made himself the most powerful Vice President in our countryâ€™s history. So even if Cheney wasnâ€™t one of the most mercenary and secretive politicians in recent history, itâ€™s probably a good thing that Adam McKayâ€™s Vice doesnâ€™t especially bother with that sort of â€œhumanizingâ€ effort that filmmakers typically devote to their real-life subjects, instead opting to dramatize what is known about him, and what he accomplished on behalf of, or perhaps more accurately inflicted upon, the American people.McKay, continuing to evolve after making a stab into more serious fare with The Big Short, proves himself to be a funny, adventuresome truth-teller, crafting a biography thatâ€™s less interested in demystifying the Republican manipulator and demagogue than showcasing his ruthless, amoral ambition, filtered through a poisonously harmonious relationship with a partner, his wife Lynne, who is every bit his unscrupulous and self-justifying equal. 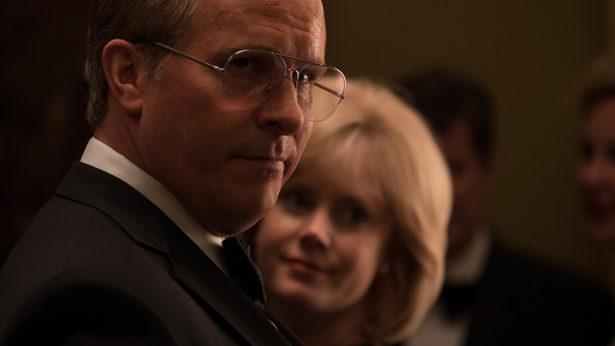 Christian Bale plays Cheney, a “neâ€™er-do-well” of a young man who leaves behind two youthful run-ins with the police and a dead-end construction job to pursue a career in politics after his wife Lynne ( Amy Adams) demands that he shape up or ship out. Initially interning for then-congressman Donald Rumsfeld (Steve Carell), he quickly learns how to maneuver and manipulateâ€”both people and the machinery of government itselfâ€”and by the 1980s becomes a major Washington player, admired and feared in equal measures. But when polling indicates that he would land at the bottom of a list of preferred Republican candidates for President, his meteoric rise appears to be in danger of stallingâ€”that is, until George W. Bush (Sam Rockwell) asks that he become his VP in the 2000 election.Much like The Big Short, McKay provides plenty of real information to gobsmack stunned liberals, but by reverse-engineering documented decisions or conversations into scenes that few likely saw unfoldâ€”or at least, few who are willing to talk about themâ€”he avoids turning this biography into a platform for The Social Network-style speculative fiction. At the same time, he is unafraid to dramatize key moments in the Cheneysâ€™ lives, albeit mostly for comedic purposes, or more often, to deconstruct biopics and the hallmarks of their narratives.

The moment that Cheney contemplates accepting Bush IIâ€™s offer is written like a scene from Richard III, complete with Shakespearean dialogue; his campaign to reclassify and seize war powers unfolds literally like a savory menu of specials offered table-side at a mahogany-dipped steakhouse. But as funny as each of McKayâ€™s digressions are, they exist and are tied together by a certain inescapable horror and revulsion at what has happened, and continues to, as a result not just of his actual policies but the tactics that he turned from despicable subterfuge into political boilerplate.McKayâ€™s impressionistic approach comes together through an editing style that creates some alternately beautiful and horrific parallel lines, but itâ€™s anchored by Bale and Adamsâ€™ performances as Dick and Lynne, two peas in a gilded, rotten pod. Together, the two of them are electric, and absolutely believable, as a man fulfilling the ambitionsâ€”or perhaps the destinyâ€”of a woman who recognizes her gender and generational disadvantages, but remains determined to be in as close proximity as possible to the halls of power.Suffice it to say that thereâ€™s something deeply chilling about their greed, and the shamelessness with which they satisfy it. But thatâ€™s ultimately what makes Vice such a remarkable movie, with such a perfect title. The only virtue lies in exposing them for what they have done.