Titandeath, the first supplement for Adeptus Titanicus, isn’t a thick book. It doesn’t have much fictional background material in its 97 pages, but it’s one of the most informative books on how Titans—the mighty, stories tall war-mecha of the Warhammer 40,000 universe—wage war Games Workshop has released. That makes it really cool and really useful.

The lore on Titans has always felt sequestered in little nooks and crannies of 40K fiction. Some of the best writing on them can be found in Forge World’s Horus Heresy books, which are masterpieces of production value with a prohibitively expensive price tag for many. I don’t read many Warhammer 40,000 novels, so can’t speak for the presence of Titans there, but I recall that I’ve only read one Titan short story out of all of the 40K fiction I’ve read. Between the expense of 40K-scale Titans, the Forge World Books, and the ratio of Titan stories to Other Stuff stories, it hasn’t always been visible just what Titans at war look like.

Titandeath changes that from the first page. The book is set up as background and rules for a campaign across the Beta-Garmon star cluster, a campaign dubbed the Titandeath. That name stems from just how many Titans were present and how many were destroyed. As a bloody prelude to the Siege of Terra, one of the iconic events in 40K history, the fictional oomph of Space Marines being able to fight face to face only because the far more impressive and important Titans ruthlessly destroyed one another is palpable.

You get a pretty standard Games Workshop accounting of the historical campaign in the first bit of the book. Standard doesn’t mean bad or uninformative, just that it adheres to a template: a timeline of events, each a small blurb, spread over pages filled with paintings of the planets being warred over. The place where this bit shines is the planet descriptions, which are always useful to a 40K aficionado, whether for a roleplaying session or wargame. 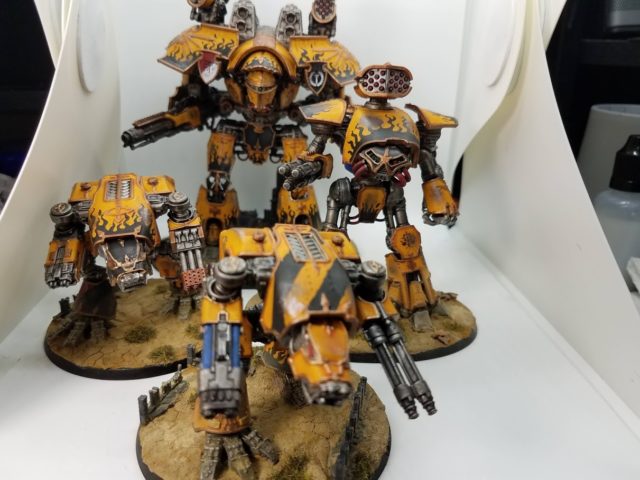 The neat trick that Titandeath does is putting the most useful background information on Titans in cold, hard rules text. What does a battle between Titans feel like? Well, we know that they have to pull their punches unless they’ve been turned loose from the Beta-Garmon background. But look at the rules for the “On the Edge of the Void” scenario in Titandeath and you see more. Warring Titans face off in the dockyards of Theta-Garmon (another planet in the system), with neither wanting to destroy it. So the traitor Mechanicum concocted a way to trigger solar flares as a way of blinding the Loyalist forces, thereby shortening the destructive potential of a long battle.

You get rules for this, if you want to play the scenario. That shows rather than tells the creative, solar system spanning power at play in Titan battles and the ways strategy necessitates tactical workarounds to how much firepower is in play. There’s another scenario for when the gloves come off, with waves upon waves of Titans crashing into one another. Again, we can see in two pages what a novel might tell us in 10, and putting it in action in an Adeptus Titanicus game is a novel in itself. 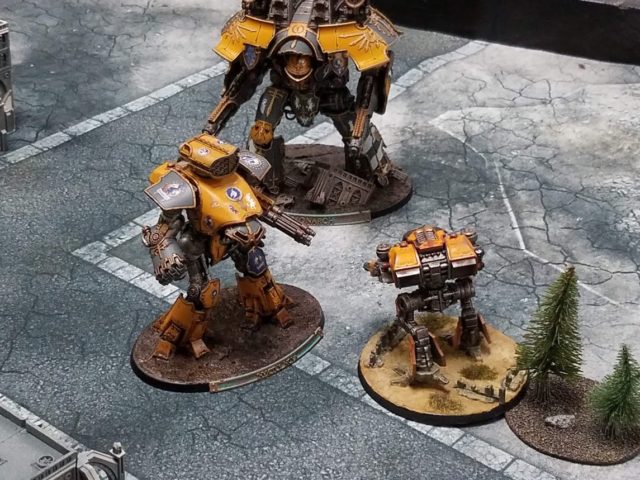 The rules for the newly detailed Titan legions, eight in all, work the same way. In a vacuum, it’s hard to imagine tactics for gigantic, Gothic-themed mecha beyond “shoot big guns”. In short order, the added rules for the legions helps expand your imagination. My chosen legion is the Legio Fureans, primarily because I’ve always wanted to do the yellow and black flame pattern on my Titans, ever since I was a boy. But what are they like? They’re hunters, which we know not just because of the description of them, but because they can get some special equipment to lower penalties to hit at long range. They pray to the Omnissiah in every part of their God-Machines, giving them a reroll for each phase of action they pass up in order to pray.

That kind of thing suffuses the book. Toss in rules for designing your own campaigns and new maniples and you have the greatest, most accessible fleshing out of the Titans put to print. This book isn’t a tome of fiction or an art book, but something else, greater than the sum of its parts. You can feel the Titans in this campaign and all the cool rules doodads. That’s coming at the end of a production schedule which has seen Adeptus Titanicus given robust miniatures support. It’s nice when part of 40K  breathes and Titandeath helps one corner of the universe do just that.

Got a favorite bit of Titan lore? Tell us in the comments!