Each week here at Geek & Sundry we’re taking a look at new and upcoming exciting titles on Kickstarter! This week’s Kickstarter of the week is Tiny Epic Zombies, the latest in Gamelyn Games’ line of small boxes that provide a huge amount of fun. As of this writing, the Kickstarter has exceeded their $15K funding goal and is at over $540K.  If you want to stay tuned into what’s going on in the world of tabletop, be sure to tune in to  Game The Game every Wednesday starting at 4 PM PT on  Twitch and  Alpha.

Board game fans love a big box. There’s something about dropping a gigantic cube full of fun on the table, easing off the lid and pouring out mountains of pieces everywhere to play throughout a lazy Sunday afternoon. Gamelyn Games has been impressively cramming that big box feel into a series of games with boxes that can fit in a large pocket and play times that wrap up in the time it would take to watch an episode of the latest streaming binge-fest. The Tiny Epic games, as they are known, have covered everything from kingdom building to space exploration. You might be most familiar with Tiny Epic Galaxies from the series, which we’ve played on TableTop. 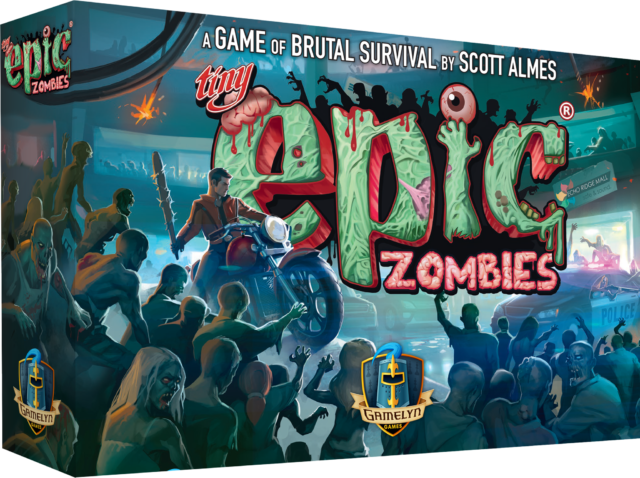 Tiny Epic Zombies covers a genre that’s exploded in the past decade; the players are stuck inside the Echo Range Mall scrounging for supplies. What makes the game stand out from the other games inspired by The Walking Dead or Dawn of the Dead is…the execution. (Sorry. Not sorry.)

The game offers five modes of play out of the box. Players can work together to fend off the zombies, play against each other to be the lone survivor once the wall of the mall fall, play against a player who controls the zombies either competitively or cooperatively or play alone, while waiting for the other survivors to return with supplies. The basic gameplay stays the same: a player takes three actions on their turn, reveals the search card dealt on their turn, more zombies enter the mall, and then the next player goes. Players need to keep their ammo high and their wounds low. If the two counters ever meet, that character becomes zombie chow. 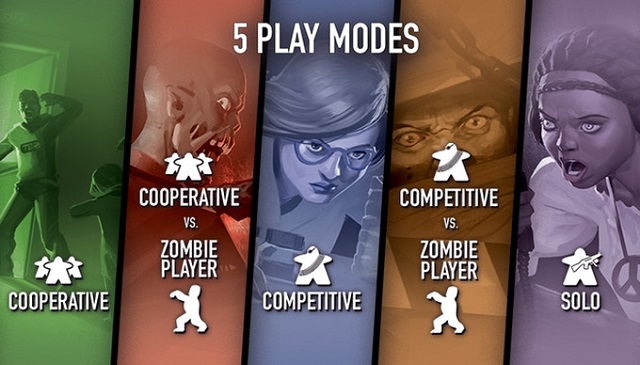 The game has a fun art style for its characters with double-sided cards that show a zombified version of the character. It also brings in an adorable tactile element called ITEMeeples first seen in Tiny Epic Quest, Gamelyn’s attempt to put an adventure game in a tiny box. Character find item cards as they search the mall but when they find one they keep, a small plastic version of it gets put on the meeple, too. Meeples are adorable by nature, but seeing them wield chainsaws and rack shotguns in battle with undead hordes makes them seem kind of…badass? The game also includes meeple-sized vehicles like a motorcycle and police car for maximum mobility around the board.

The Kickstarter backer levels keep things pretty simple. $8 offers a deluxe print-and-play with the final assets with a print-and-play trail version available right now to try before you buy. $20 gets the basic game shipped upon completion. $25 adds in a few Kickstarter-exclusive items and characters. Gamelyn’s exclusives are timed; backers that don’t buy in at this level now might be able to find these bits online later.

The Kickstarter ends on February 9th, so if you want to battle zombies with the exclusives, you better hurry like you’re being chased.

Rob Wieland is an author, game designer and professional nerd. He’s worked on dozens of different tabletop games ranging from Star Wars and Firefly all the way down to his own creations like CAMELOT Trigger. He can be hired as a professional  Dungeon Master for in-person or remote games. His Twitter is  here. His meat body can be found in scenic Milwaukee, WI.