TIDAL BLADES: HEROES OF THE REEF Is A Game Experience Deep As An Ocean - Nerdist

TIDAL BLADES: HEROES OF THE REEF Is A Game Experience Deep As An Ocean

There are some games whose shining qualities can’t be distilled into a single elevator pitch.  Tidal Blades: Heroes of the Reef (Skybound Games’ most recent Kickstarter) is, to put it in the most mundane terms, a mid-to-heavyweight hybrid worker placement game. The description does the job, but describing the weight and fundamental mechanics of the game is like describing the Batmobile as a box with wheels: technically correct, but terribly banal.

As a worker placement game, strategic use of your placement actions will ultimately ensure you have the resources you need for success, but good placement doesn’t guarantee victory. Gathering Fruit resources to help fuel your success in early challenges and buy you other resources in the late game, collecting Shell resources to help ablate damage and keep your dice pool viable, growing and managing your active and spent dice pools so you’re ready to take on additional challenges, and having stunt cards to help give you a boost are some of the important options you’re given when placing your character. Smart placement also lets you play a denial game to your opponent, hindering their plans. That’s typical fare for this genre of games as worker placement is to this game like the four wheels of a car;  you’d wouldn’t really have much of a car without those wheels, but it’s also the least remarkable element.

When you look under the hood, the real driving engine of the game and the means to victory are the challenges. Players start with challenge cards from the beginning of the game and can acquire more by placing their character on the board. The resolution of challenges is where this game takes a hard left away from Euro-style games and becomes a true modern hybrid game by introducing luck into the engine of victory. Make no mistake: the outcome of dice rolls in this game have a significant impact on who the ultimate victor of the game is, but there are ways to mitigate bad dice rolls, so even the unlucky still have a chance provided they have enough resources to mitigate their terrible rolls. 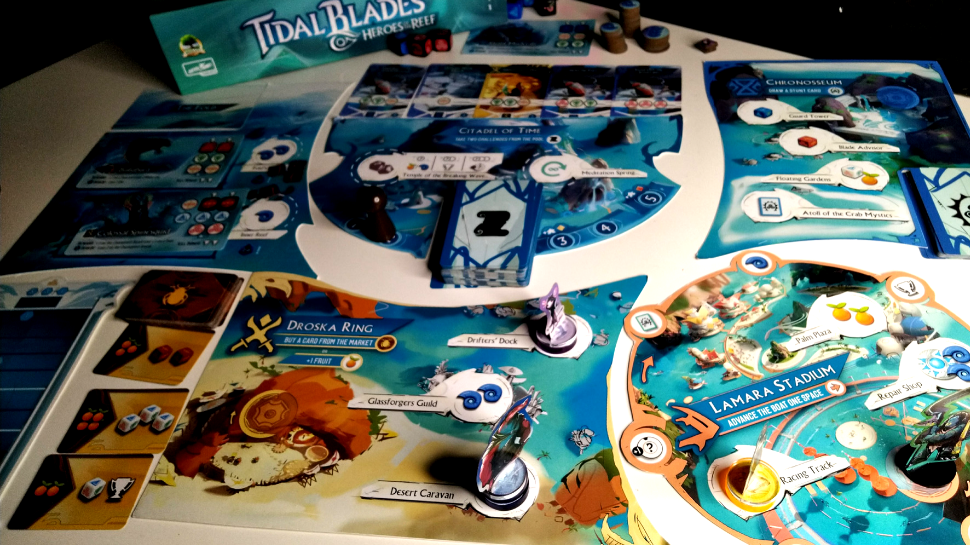 Any given challenge card is location-locked, meaning you can only try to resolve a challenge card if your character is in the location associated with the card. There are five different places you can put your worker on the board: only three of them allow for the resolution of challenge cards (Lamara Stadium, Droska Ring, and the Chronosseum). Players have an active dice pool and using dice available to them, they must try to match the outcome of traits shown on the cards with their dice. Fruit can help players roll more dice than they’re normally allowed to – a number based on their Focus trait – thus allowing them to access additional dice from their active dice pool.

While you’re afforded an unlimited number of rerolls during a challenge,  you must also include the danger die with every roll. Damage outcomes on this die force you to either lose one of the dice you’ve rolled or spend your Shell resources on your Shell Shield to ignore that damage.  Have no fear though – taking damage triggers an effect on the shield as well – removing three placed Shells on your shield allows you to change a die facing to any side, and removing five placed Shells on a shield allows you to increase a trait,  so even if you have terrible luck and have taken a lot of damage from the danger die, you’re not completely out of it. Just make sure you have enough Shell resources.  You can always try again, and by spending dice in your active pool, you have the opportunity to upgrade them in the night phase, so there are benefits to taking on challenges, even if you’re not always successful. 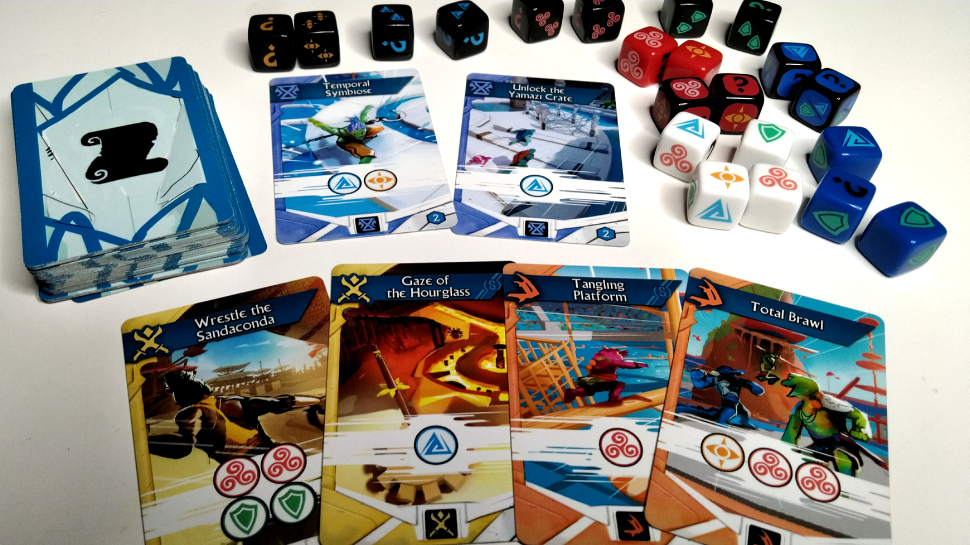 The upgrading of dice is one element of the dice pool management mechanic that is compelling. Not all dice are equal. While the novice die provides fewer probably successes overall, they offer more variety of trait types. Dice can be upgraded to have more successes of a particular trait type. Adjusting and balancing one’s dice pool for the challenges available to the player becomes extremely important in the game – players who poorly manage their dice and challenge cards are at a disadvantage.

If a player rolls successfully to resolve the challenge, they not only keep the card (which earns victory points) but also can increase the traits listed on the cards on their character board, providing additional benefits to that player as well as endgame victory points. It also means that choosing which challenges you try to resolve will have impacts on how you will continue to play later on in the game. For example, choices that were less viable early game may suddenly become key options because of what traits your character has upgraded. The evolving nature of the character boards means there’s a huge potential for replayability – a different game, with a different hand of challenge cards could well change how a player approaches the board in the game’s later turns. 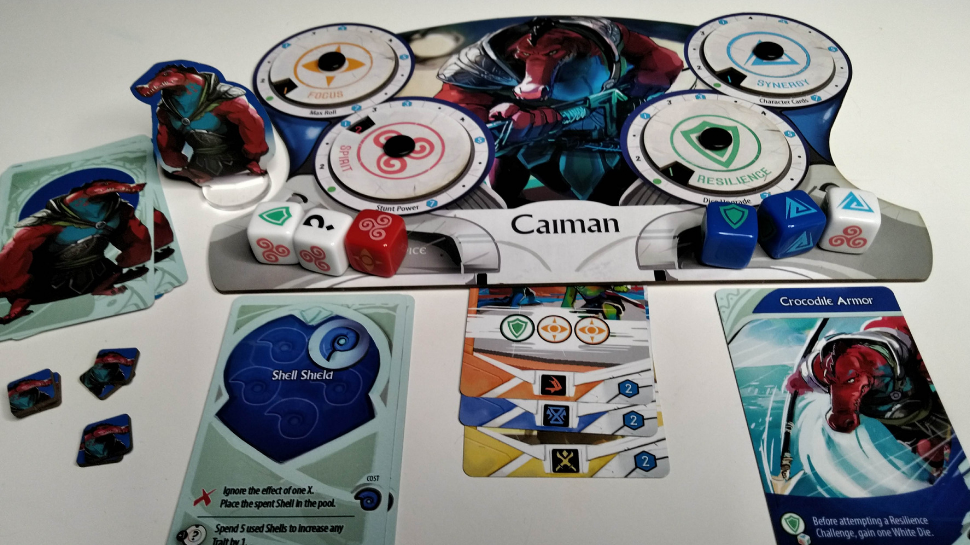 With worker placement, dice pool management, challenge resolution, and the evolving character trait system, there are a lot of meaningful decisions offered to players, and it puts them squarely in the driver’s seat. It’s built into the game from the very start – the game has an asymmetrical design. Each player takes on a unique character starting out with their own set of benefits and boons, so even character choice matters. 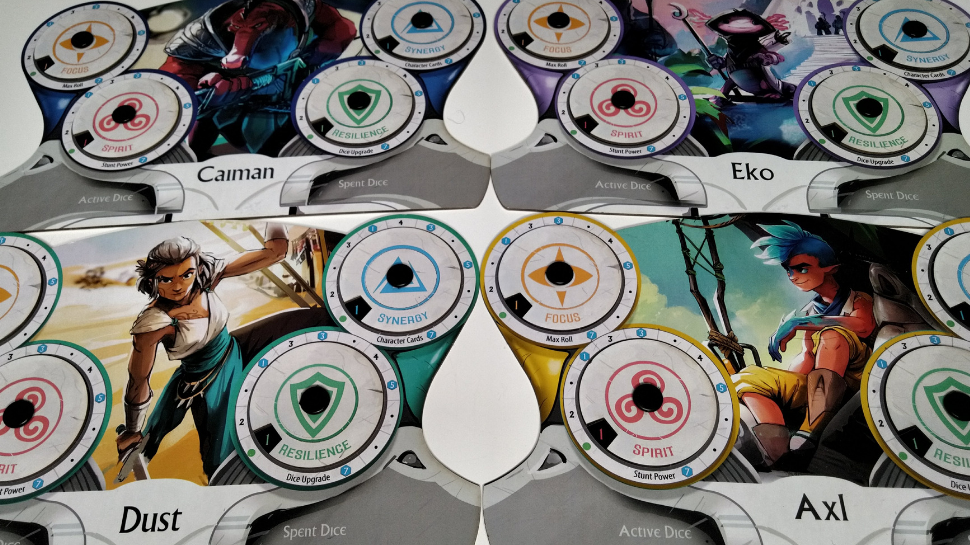 The unique characters and their asymmetrical design actually enriches the world of Tidal Blades and makes it feel more lived-in. There is a significant narrative element injected into this game.   World design is credited to “Mr. Cuddlington” (the husband and wife of David Forest and Lina Cossette who’s created immersive worlds for other tabletop games) and there are artist diaries that dive deep into the narrative and lore of the universe the game inhabits, with more recent ones exploring the playable characters and their motivations. It would seem that this is less like Hunger Games and more like The Olympics, preparing competitors for something much bigger and more dangerous, and there’s a taste of it included in the game, as it emerges from The Fold. 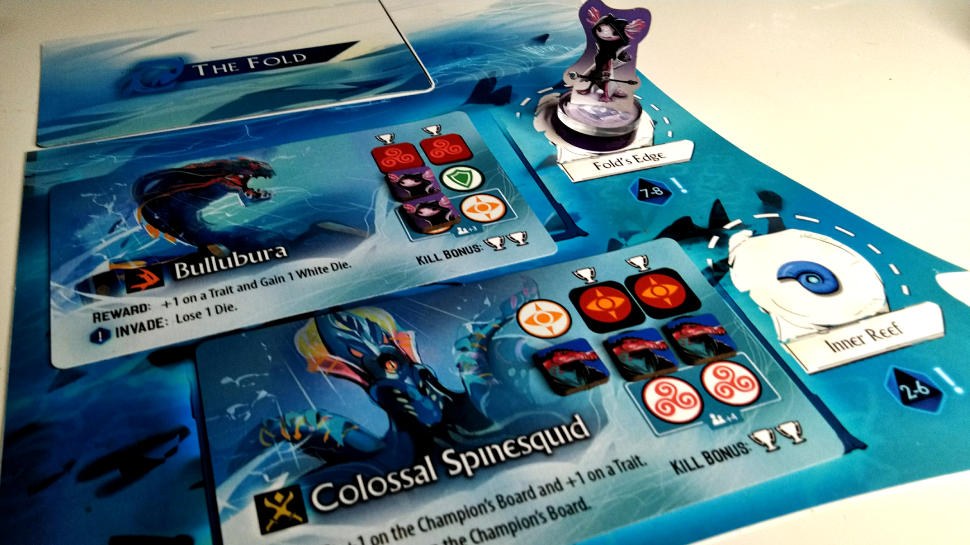 The mechanics of The Fold location of the game is an offshoot of the challenge mechanic in that fighting a monster from The Fold is resolved similarly to resolving a challenge. Dice are rolled, but instead of being spent, they are ultimately lost. When monsters appear, they compel players to either attack them, at the cost of their dice, or ignore them and potentially face their invasion drawbacks. It is where the player cooperative elements of the game are also most obviously observed. There are other mechanical elements that introduce the idea of cooperation as a thematic concept (like earning fruit when a player successfully resolves a challenge at a location you are in, because it is presumed you helped set the challenge up as part of the crowd) but it is in the confrontation of the monsters from The Fold board that cooperation is actually realized.  While this is pure speculation on my part, it hints at something to come later on in this series of games (Tidal Blades: Heroes of the Reef is labeled as “Part One”).

This game has a lot of moving parts, but it also offers a lot of meaningful choices. It offers a lot to those looking for a heavier gameplay experience. You can see how it all comes together in this special episode of Game the Game: