When it first got started in 2009, the four-person crew at Hello Games worked on small but enjoyable game projects, including Joe Danger and its sequel, Joe Danger 2: The Movie. But then, during the VGX Awards broadcast in late 2013, the company unveiled an ambitious new project called No Man’s Sky, an open-world adventure where players explore a universe filled with majestic, tranquil planets, in any order they see fit.

Since that time, the team has gotten over some hardships–including a flooding that shuttered its office shortly after the trailer’s debut–but the game is shaping up to be a heavily anticipated title for PlayStation 4.

So what makes the game stand out? A number of things, but here are the five items players will want to keep an eye on.

There’s no story, but there’s a whole lot of exploration. No Man’s Sky doesn’t rely on a backstory—it simply opens up the universe for players to find whatever they see fit. And for those worrying that this space won’t be big enough for them to explore, there’s no need to–we’re talking 18 quintillion possible planets available in the game. It’s a safe bet you probably won’t even get to them all, since you practically visit one at a time.

Each planet is different–and beautiful. With No Man’s Sky‘s exploration system, players can zoom right to the planet’s surface from a high-up point without any interruption in the travel. This enables them to see the gorgeousness that each planet has to offer, whether players visit day or night. And they all differ from one another, thanks to the savvy development of co-founder Sean Murray and his team. 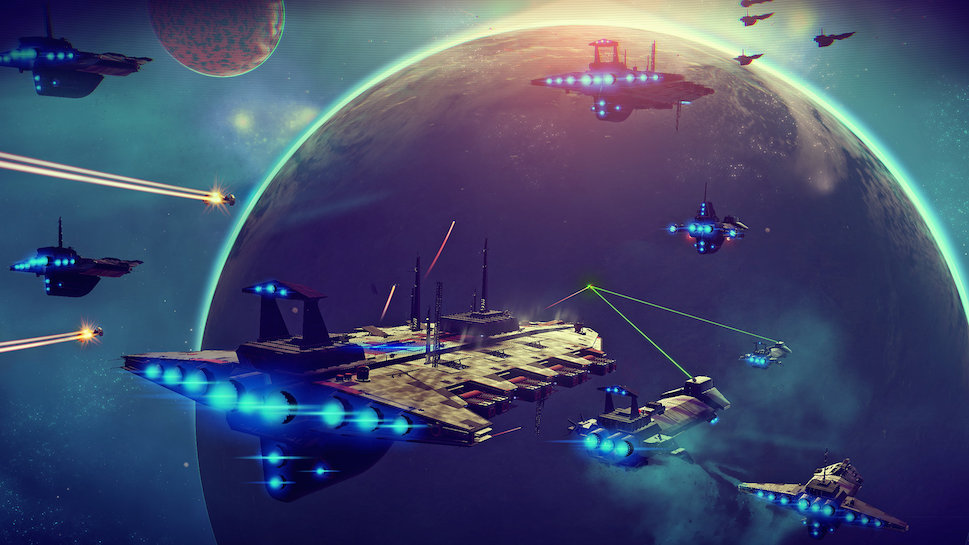 There’s a competitiveness to discovering each new planet. While the game works more on a “look around and see everything” level, there’s a certain competitiveness when it comes to accessing information about it and sharing it with the Atlas, by utilizing Beacons found on each of the planets. The first player to upload information about that planet will be credited with its discovery–kind of like a modern Christopher Columbus. But, you know, with Internet.

There will be glorious space battles and enemies. Whether you’re flying through the outreaches of space or landing on a planet surface, you’ll encounter a bit of hostility on your journey. Hello Games hasn’t broken down completely how the combat system will work, but expect plenty of innovation, as well as weird space beasts—like carnivorous worms—that pose a challenge.

Come and get your upgrades. Finally, you’ll start the game in a basic vessel, but throughout No Man’s Sky, you’ll have the opportunity to use upgrades—trading and selling resources to earn better ships and additional fuel. On top of that, blueprints and resources can be used to craft new items as well as upgrade the player’s exploration suit. Again, not all the details are available just yet, but it’s a promising system with lots of replay value attached. (As if the 18 quintillion planets didn’t do that already.)

No Man’s Sky doesn’t have a release date, but one should be announced soon.