The Terminator Strategy Board Game Pits the Past Against the Future

While it’s unclear where the next Terminator film will fit into the timeline, the future is the past for the new board game based on the original movie. The Terminator: The Official Board Game was launched on Kickstarter earlier this month and it’s already blown away its funding goal of $120,000. Or should we say that the goal has been terminated?

The Terminator board game was designed by Lynnvander Studios and produced by Space Goat Productions. Because the license only covers characters and machines that were introduced in The Terminator, later creations like the T-1000 are absent from this game. But as you can see, the first film in the franchise offers more than enough material to build a game around.

One of the most intriguing aspects is the way that the asymmetrical board covers events in 1984 and in 2029, the Skynet dominated future that was only glimpsed in the original movie. One player will assume the role of Skynet and all of its lethal machines, including the Terminators, the Hunter Killer machines, and more. The rest of the players will make up the human resistance, and fight back in different ways. In 2029, the resistance will focus on using troops and their limited resources to stop the relentless march of the machines. But in 1984, the missions take on more personal stakes and even offer players a chance to change things in the past that will affect the unfolding events in the 2029 part of the game. 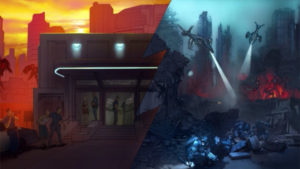 Each box includes the dual game boards, two cyber dice, 20 mission cards, 11 stat cards, 160 action cards, and 20 miniature figures of the characters and a few supporting players as they appeared in The Terminator. 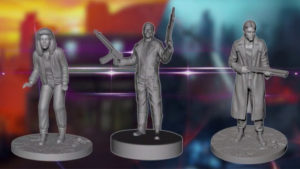 Fans who pledge $60 will get the core game and any additional items that are unlocked through the stretch goals. But for an $80 pledge, fans will get the game, the stretch goals, and the exclusive Termination Box Set; which includes five additional characters. It’s a refreshingly simple reward tier, as the only other option is geared towards retailers.

The Terminator Kickstarter campaign will run until Thursday, March 16. And if you visit the official campaign page, you can actually download the free print-and-play demo of the game to get a taste of what to expect. Space Goat has said that the demo is not the final version of the game, but it is taking feedback from fans into account while finalizing the official release.

Are you excited about The Terminator‘s official board game? Let us know in the comment section below!