The Return of King's Quest - Bringing Back The Classic - Nerdist

The Return of King’s Quest – Bringing Back The Classic

Years ago, Sierra Entertainment thrived with a number of worthwhile adventure games, with the King’s Quest series standing out in the mind of many a classic gamer. Loaded with great puzzles and memorable characters, it’s become the stuff of legends. And good news… it’s back for more.

Earlier this month, the newly revamped Sierra re-launched the King’s Quest series in episodic form with its debut installment, A Knight To Remember, featuring the likes of Christopher Lloyd and Wallace Shawn in a tale of adventure, excitement and, of course, laughs.

We caught up creative director Matt Korba to see how the series managed to make a return and to find out what’s next for the team.

First off, it almost seems like ages ago that we saw the last King’s Quest game. What do you think the main hang-up was in regards to bringing this series back?

Many people have tried over the years to bring it back, and nothing ever stuck.

King’s Quest has always been on the edge of its return. A series as beloved as [Kings’s Quest] is never completely goes away. The Sierra fans kept the series alive with remakes and fan sequels. I think it was just the right time. Telltale Games proved that adventure games could still be commercially viable and the Broken Age Kickstarter proved there was a strong demand for a revival.

For Activision, reviving Sierra was a passion project lead by a small team inside the company, and I believe finding the right team was key. At the time when we got the game project, we were much smaller than we are now. It says a lot about Sierra that [Activision] was willing to take the risk on a small team based purely on [Sierra’s] creative vision, as that rarely happens in the game industry.

So you actually consulted with the creators of the series to make sure it was going in the right direction. Tell us how this meeting came about.

King’s Quest is my favorite game series of all times, so it was important for me personally to make sure we got the blessing of (the original creators) Ken and Roberta Williams. We could have just copied one of the classic games with a new skin in HD, but that would have been too easy and would have appealed to a smaller audience. We wanted to make sure we were making a game that Ken and Roberta would have made if they were still making adventure games in 2015… which meant we needed to be pulling from the same sources and inspirations that they did.

Going to meet them was absolutely nerve wracking up until the point when they stepped in the room. They are truly wonderful people and we were very lucky to have them onboard. We showed them an early demo and outlined the game for them. They loved it and we spent an afternoon discussing design philosophies, adventure games, and branching narrative. They have and continue to be very supportive and inspirational mentors.

How did you guys come up with such a fun script for the game? Did you get any consultation from the creators?

We did a lot of improv and acting out scenes around the office to find the characters and script. Lindsey and I have worked together now for almost 6 years, so we can get a script up pretty fast, but it needs to work with the gameplay, which is the tricky part. With all the branches and variation, we ended up with a 640-page script. We just had fun with it really, and made it very personal. That’s how the best stuff came out. A random joke in the office would become a key character or moment. The team is always trying to make each other laugh or top each other and I think you can feel that in the game. 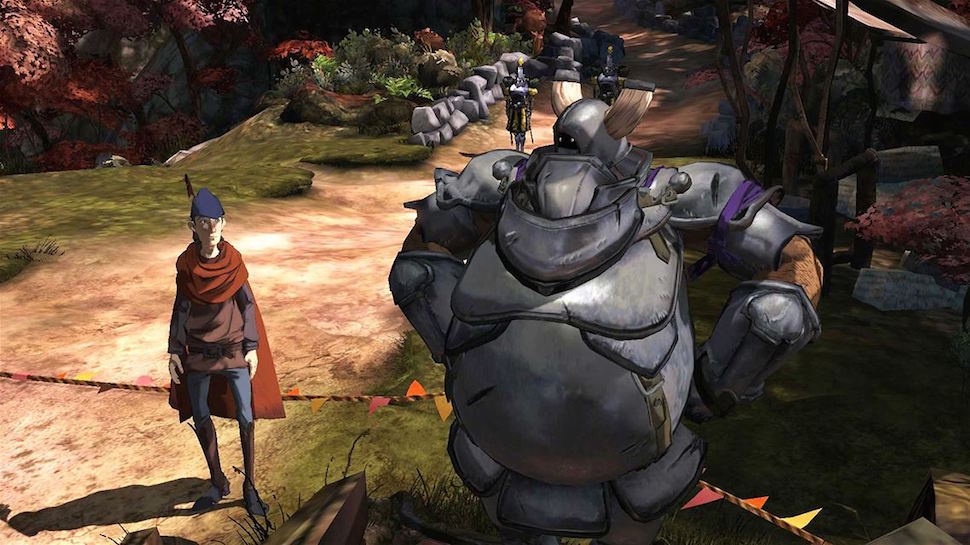 Speaking of talent, how did you manage to get a voice cast that includes Christopher Lloyd and Wallace (“Inconceivable!”) Shawn?

This was the first time we had ever really done voice casting on this scale. When we started, we had to create character sheets describing details about a character, some sample lines, a piece of art showing off the character, and then a voice or tone inspiration. We’re sticklers for the details and we were incredibly diligent with our tones. We had certain styles of characters already built up in our minds and we really wanted to find the person to match that. What we didn’t expect was that on many occasions Eric Weiss, our casting director, was going to just say, “Let’s just cast your inspiration actors.” To which we said, “Wait we can actually do that?”

That said, finding an American actor who was of the proper age to play Graham and have a whimsical voice was no easy task. Christopher Lloyd fit the bill perfectly, and luckily he agreed to join us on this adventure.

We’ve seen the release of the first episode so far. How many episodes will there be in all for this season?

There will be five core episodes and then a bonus epilogue. The core episodes will tell stories from key moments in Graham’s life and what shaped him into the greatest adventurer to ever live. We’ll reveal more as we go… but for now, we are keeping things under our hats.

Were there any difficult problems you ran into when it came to getting the game just right for King’s Quest fans? Or was it a pretty smooth process?

Games are a funny beast. They are so many things at once: compelling gameplay, awe inspiring art to explore, a real-time animated story in which the player has authorship, and the blood, sweat, and tears your team pours into it. Not only that, we needed to fulfill the legacy of King’s Quest while also modernizing it for a new audience. The last game came out about 17 years ago. There are quite lot young gamers who have never played a King’s Quest game. However, our office grew up on Sierra and King’s Quest specifically. We sought out the core of those worlds, stories, and characters so we could breathe life into them in a way that was at once the same as the old, but also entirely new. At one point, Old King Graham says, “It was not exactly as I remembered it, but it wasn’t all that different either.” From the fan reaction thus far, we seem to have hit the sweet spot.

And puns. Puns are very important.

Finally, if successful (and it sounds like it will be), when can we expect another round of King’s Quest?

We’d love to continue to play in the world of Daventry, remake other Sierra classics, and make new adventure games. But, it’s up to the fans to keep supporting the game and show the world that charming, funny, family friendly experiences have a place in the industry.

Fans can learn more about King’s Quest by chatting with The Odd Gentlemen on their Twitter page.

King’s Quest Episode One: A Knight To Remember is available now for consoles and PC.