We’ve seen some epic anime-inspired Star Wars videos made by the fans before. Anyone remember the TIE Fighter short film a few years back, which looked very much like ’80s shows like Robotech? Or more recently, the A New Hope anime style fan trailer? Well, now you can add another awesome one to the list. And it features everyone’s favorite bounty hunter of the spaceways. You can check out The Mandalorian anime-style opening credits video down below.

This video is brought to us by a YouTube user by the name of Malec. Just about all of our favorite characters from the mega popular Disney+ series are here. That includes Mando himself, as well as IG-11, Moff Gideon, Cara Dune, and of course, The Child a.k.a. Baby Yoda. You didn’t think they’d leave him out, did you? Although, we’re not sure if he ever chewed bubble gum on the show. But we’re here for it anyway. 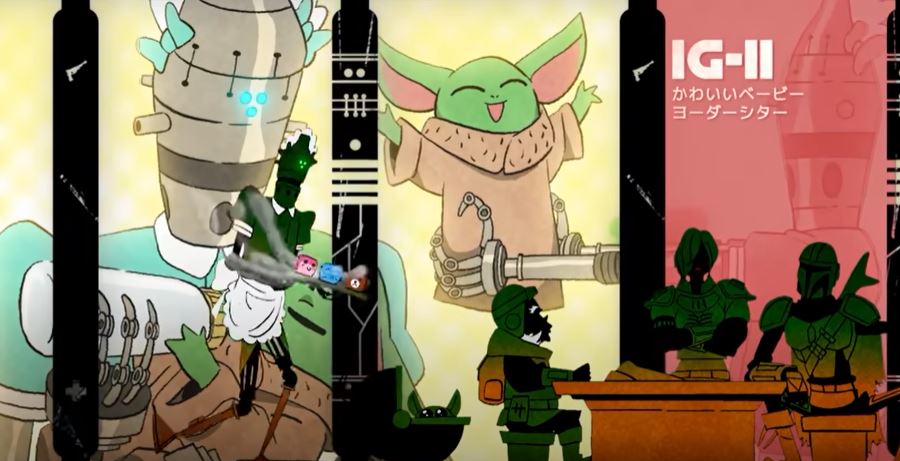 This one has a very Cowboy Bebop style to it, more than anime from the ’80s or ’90s. OK, so Cowboy Bebop probably would fit in better with Star Wars: Rebels, but we’ll take it here too. The cherry on top of this wonderful anime Star Wars sundae is the jazzy upbeat version of Ludwig Göransson‘s theme song for the series. We think that we’re going to have this one stuck in our heads for some time.

Malec has made similar videos before. They have made several anime-inspired videos for popular properties like Game of Thrones, Fortnite, and even Rick and Morty. And all of them are pretty cool. But we think that the one for Mando is our favorite. How do you beat anything that has Baby Yoda in it? For more of Malec’s videos, be sure to head on over to their YouTube channel.