A timeline of criminality from the perspective of mafia middle management, The Irishman feels like the galaxy brain version of Goodfellas—or the version of that classic tale of immortality that feels perfectly updated to suit the needs of 2019 audiences. At four hours, Martin Scorsese’s account of mob enforcer Frank Sheeran and his relationship with Teamster leader Jimmy Hoffa includes all of the requisite details one can expect from the filmmaker about Sheeran’s introduction, and immersion, in the Bufalino crime family. The film not only adopts a more reflective tone than Scorsese’s previous mob-related ventures, but expands its view to document, and encapsulate, an entire era of malfeasance that went hand in hand with American prosperity for decades, leaving behind the old men involved to acknowledge its lingering, poisonous impact on the country.

Robert De Niro plays Sheeran, a truck driver and World War II veteran who befriends and later becomes business associates with Russell Bufalino (Joe Pesci), a well-known mafioso. Working as a smuggler and hit man, Sheeran quietly ascends the organizational ladder to become one of Bufalino’s most trusted lieutenants. But when Bufalino assigns him to monitor and protect Teamster leader Jimmy Hoffa (Al Pacino), Sheeran discovers that there are networks of criminality further reaching than he ever imagined, controlling not just unions or industries but government agencies. 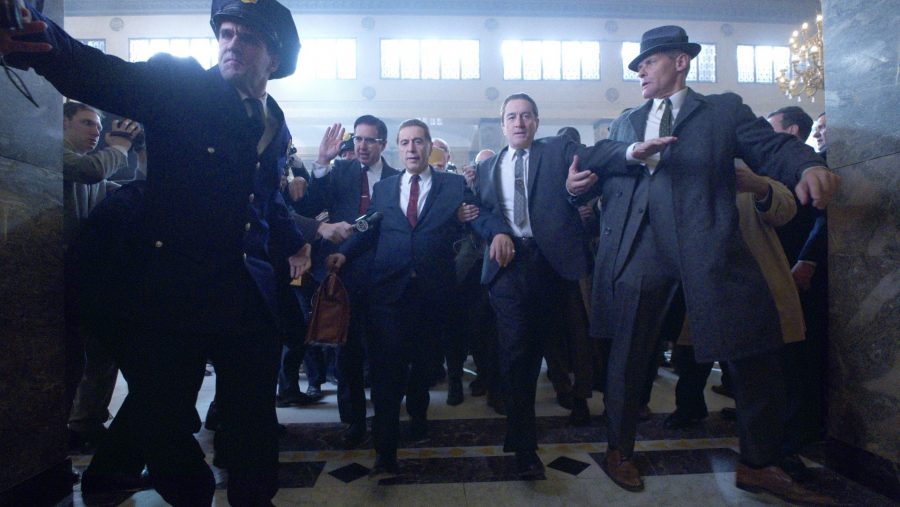 Sheeran soon joins Hoffa’s inner circle, earning a key role in the Teamsters. But when Hoffa goes to jail, losing his job as president of the Teamsters union, Sheeran becomes a go-between and negotiator not just for Bufalino’s secret criminal enterprises but corrupt maneuvering within the Teamsters engineered by Tony Provenzano (Stephen Graham). Soon, Sheeran must choose between his loyalty to the Bufalino family and to Hoffa, whose determination to reclaim his title—and obstinate refusal to kowtow to his political adversaries—threatens to expose, and undermine, the operations controlled by his mafia backers.

When Scorsese made Goodfellas in 1990, that film was hardly the first to explore the criminal underworld and all of its seductive power, but the filmmaker depicted it with such bravado that you could be forgiven for thinking that he loved these very real and very violent individuals no matter what sorts of terrible acts they committed. Casino followed in 1995, and it expanded its scope to chronicle the rise of corruption in Las Vegas—not just the men and their behavior, but their impact on the community that they controlled. The Irishman completes the cycle of those films not only by examining the men involved in some virtually iconic acts of criminality, but by looking at the cultural climate of the country itself after World War II, and the way in which their behavior affected those organizations foundationally as they came into existence, and achieved heights of “success” both above and below board.

At almost four hours, Scorsese isn’t working as propulsively as he was on Wolf of Wall Street, another film that looks at institutions that we ostensibly should believe in, but because of rampant corruption exposed too late, we simply cannot. Utilizing Steven Zaillian’s adaptation of Charles Brandt’s nonfiction work I Heard You Paint Houses, the filmmaker instead looks at this world from the point of view from one of the very few individuals involved at almost every level still alive to tell the stories meant to go with him to his grave. The result is a story that looks fondly on moments of camaraderie and connection between Sheeran and Bufalino, and Sheeran and Hoffa, for that matter, but also looks back with a grim and sometimes sociopathic reflection upon acts of violence that ate away at the soul of America, even when they didn’t eat at the soul of the men who committed them. Scorsese’s expertise in drawing out the story at the right moments creates an elasticity of time, punctuated by a title card revealing how someone died or a transition from one decade to another, but it also showcases how these men lived with their choices, as they watched them affect the people around them, and eventually, the country itself. 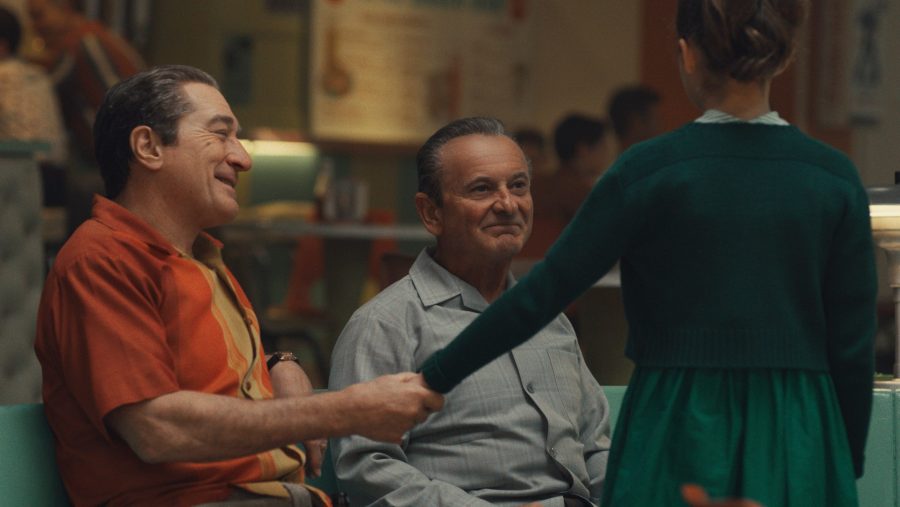 The timeline of the film backs up as far as WWII and continues until Sheeran’s final days in 2004, and Scorsese’s much-ballyhooed use of CGI to de-age De Niro and his co-stars works inconsistently—at least insofar as there are some times when it feels seamless and others when it definitely doesn’t. But what is more important in the movie, and perhaps to Scorsese himself, is the way that Sheeran’s role in American history is both crucial and seemingly invisible; he wasn’t a mob boss or significant leader within the Teamsters organization, but his actions fundamentally impacted industries and government organizations for decades to come. He came of age within the Bufalino organization at the exact moment that the country discovered and actualized itself, baking in the criminality and corruption that continues to plague our institutions today despite the best efforts of idealists and justice-seekers.

Scorsese creates an atmosphere of manipulation and control that legitimizes the hearsay suggesting that John F. Kennedy’s assassination was mob-driven, for example, and then reinforces it with accounts of behavior from real people who improbably but truthfully found themselves in the middle of key moments in American industrial and political history. How does a man delivering trucks to Sheeran later take center stage delivering grand jury testimony in front of Congress to legitimize a conflict halfway across the globe? How does these connections evolve? Scorsese shows the way that they were real, and how they went virtually unchecked for decades while these men quietly served as gatekeepers to fortify their own fortunes, support their allies and exorcise personal grievances on a national stage. That this behavior continues today in different permutations, with further-reaching ramifications, offers a haunting punchline to the life of one man who toiled just outside the spotlight on behalf of headline-grabbing crime lords and politicians.

De Niro is not quite equal to the task of playing his youngest self—he’s the oldest-seeming 25-year-old I’ve ever encountered—but he certainly owns Sheeran’s not-always-quiet authority, his escalating responsibility and increasing anxiety over a life of brutality that forces him to choose between competing loyalties. It’s a 500-yard look back at a life filled with matter-of-fact moments that would on their own horrify most ordinary individuals, and De Niro carries that age and perspective with tragic beauty. Pesci, returned from unofficial retirement, seems at ease in his authority as Bufalino but never asleep or lazily rendering the character’s dance between affability and menace. Pacino, meanwhile, continues to indulge his own late-stage theatricality as the charismatic Hoffa, but uses it to showcase the way in which the union leader forced the hand of his benefactors by never doing the thing that Sheeran always did—namely, understanding where the limitations of his power ended, and the control of others began. 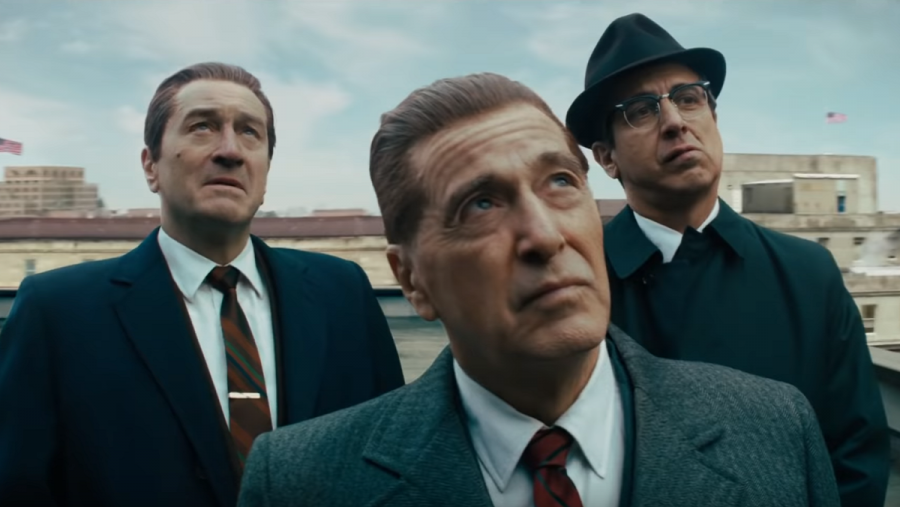 As Sheeran’s grown daughter Peggy, Anna Paquin isn’t mentioned above, and she has only a handful of lines (if any). But she provides a crucial presence in the film, playing an observer to Sheeran’s behavior that no one else was, including Frank himself. Peggy is the witness of his agent of corruption and violence—not just to himself, or to her, or to their family, but to the soul of America as it struggled to solidify the institutions purported to make it great. An extraordinarily powerful film that starts with a single man and pulls back to expose the country that for better—and especially worse—he helped make, The Irishman offers another vivid, indelible portrait of humanity from a filmmaker who realizes there’s less time in front of him than behind, and possesses enough wisdom and skill to look back on where he’s been—and where we’ve been—while forging ahead with a style and creativity that feels invigorating, vital and timeless.