There’s been a lot of debate surrounding Martin Scorsese’s latest epic crime film, The Irishman. The film’s astounding running time—209 minutes—has plenty of critics, and the visual effects, most notably those used to reconstruct the characters’ younger faces, are as divisive as they come. But people on either side of that latter conflict may have their minds changed by new insights in this BTS visual effects video, which hopefully helps everyone to better understand how this spicy Bufalino was made.

Netflix’s BTS video explaining how filmmakers pulled off the visual effects in The Irishman.

In the 13-minute video, filmmakers who worked on the project, including Industrial Light & Magic’s head, Rob Bredow, Visual Effects Supervisor Pablo Helman, and of course, Scorsese, discuss how they took The Irishman from seemingly impossible-to-execute concept to potential Oscar-winning movie. And even though a lot of the details of how the tech works seem like they need their own Robert Downey Jr. explainer video, it’s easy to see how insanely detailed images manipulated with visual effects have become.

A clip from The Irishman showing off Robert De Niro and Joe Pesci’s younger faces.

A large part of the video focuses on the “Flux” software used to create the younger faces in the film. ILM’s Facial Capture Lead, Sonia Contreras, describes how Flux works, noting that it would take footage of the actors’ performances on set and translate them into virtual, 3D models. Those models would subsequently be infused with details such as pores, moles, muscle movements, and even blood flow, and ultimately manipulated into younger versions of the actors’ faces. (As a side note, anybody looking for a far more in-depth explanation as to how Flux works, as well as the infrared camera rig used to shoot the actors, that’s available on fxguide.) 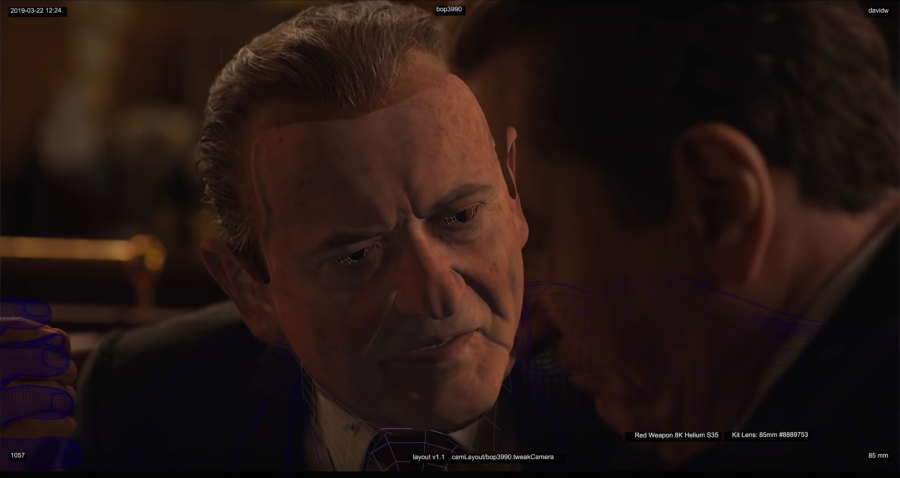 Despite the innovation that was required to pull off the young, faux faces—and bodies, hands, etc.—it should be noted that there was at least one person out there who thought they could’ve pulled off the effects better, and possibly did. The video below (via Vulture), for example, shows off what YouTuber iFake was able to do using free software. You can compare it to the clip from the film above to decide which style you like better.

Perhaps the most exciting, and possibly frightening, aspect of this visual effects explainer for The Irishman is how it helps to show how much potential there is for this kind of technology. It seems fair to say that Robert De Niro, Al Pacino, and Joe Pesci’s younger faces kind of fall into the uncanny valley in this film, but what happens when they eventually don’t? We may need to hope that the door to knowing what’s real or not in movies is left open a crack.

What do you think about these visual effects from The Irishman? Are you blown away by these innovations, or does everything tech-wise in the entertainment industry pale in comparison to Avatar? Let’s see how your thoughts age after you leave them in the comments!