The Force Is Strong in These Five STAR WARS Board Games

With the release of Solo: A Star Wars Story on Blu-ray and DVD, there’s never been a better time to be a Star Wars fan. New movies, books, comic books, video games, toys, and merchandise are released regularly. No more waiting years before something new comes out!

And for those of us who also love board games, we get the best of both worlds, with plenty of Star Wars-themed games to play, from casual card games to immersive campaigns with amazing miniatures.

You don’t need to search in a galaxy far, far away for great Star Wars games. Here are five of our favorites.

The latest and greatest from Fantasy Flight Games, Star Wars: Legion takes you into the heart of combat, as Rebel and Imperial infantry forces clash on the ground, from Endor to Hoth. In this tactical skirmish miniatures game you’ll fight as either side during the Galactic Civil War.

Paint your miniatures, move them on the battlefield, and roll dice to attack. Whether you’re trying to take down Imperial stormtroopers or seeking to squash Rebel scum, it’s up to you to wield your forces more effectively and meet your victory conditions before your opponent does.

For a closer look at Star Wars: Legion, check out Teri’s hands-on impression of the game.

In this one-versus-many game, you and your band of Rebels must outwit and defeat the Empire through a multi-game campaign. Gain experience, skills, and weapons for your crew as you complete missions. You may even meet a certain Jedi ally along the way … or run into a Sith Lord threatening to end the Rebellion once and for all. 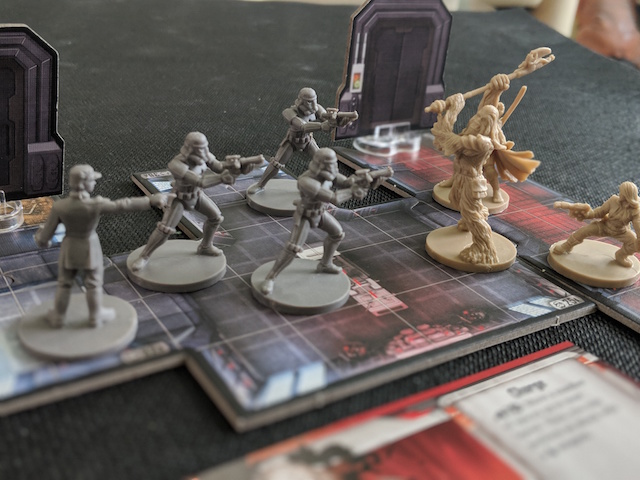 The recently released Legends of the Alliance app streamlines game play, allowing the AI to man the Imperial player during a new campaign, and you can also solo the game as well. The app is free for iOS and Android.

This fast-paced two-player card game will have Original Trilogy fans rejoicing in their land speeders, with cards featuring screenshots from Episodes IV, V, and VI. Players take an Imperial or Rebel deck of cards and play them over key events in the trilogy. 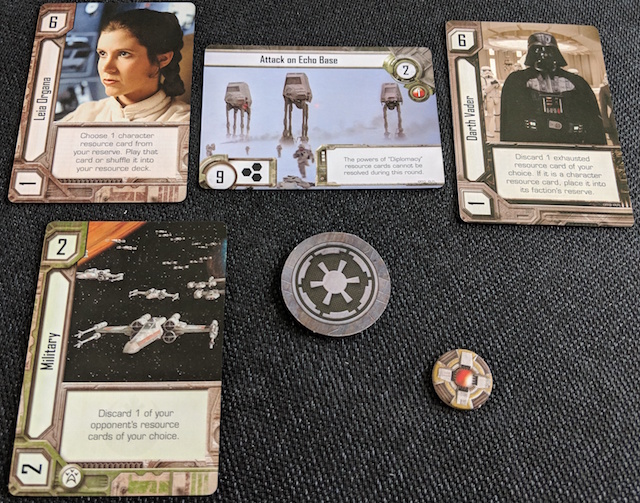 Using tactics from diplomacy to military, and classic characters from Obi-Wan Kenobi to Grand Moff Tarkin, you’ll attempt to play your cards to score points and win the battle for the event. You’ll have additional resources to lead you to victory, but exhaust them wisely; a misplayed card may doom you to a fate worse than the sarlacc.

Up to four can play this Star Wars version of the tile-laying classic Carcassonne. Draw tiles and lay space routes, asteroid fields, and planets, then place your meeples (Luke, Vader, etc.) on them to score victory points. Best of all, there’s no more fiddly farmer scoring from the original to worry about; instead, you can now attack your opponents during combat for the various planets. 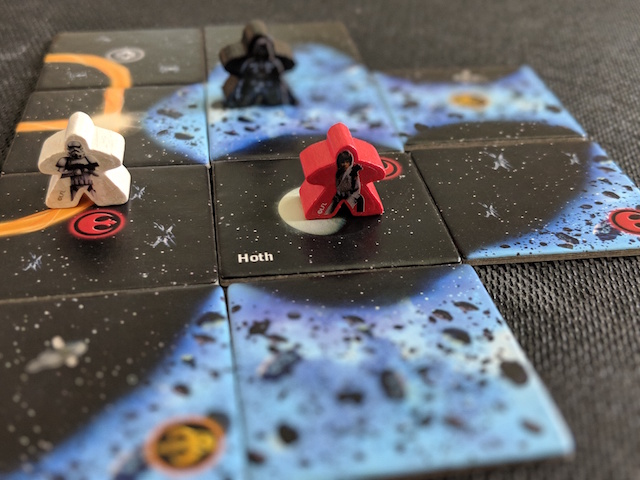 While technically not sold in the U.S., you can easily find this on sale at your favorite online game retailer; I was fortunate to run across a copy when I visited Dear Spiele in Japan.

Don’t let the Risk branding fool you: Risk: Star Wars Edition has little in common with the original game and it boasts an amazing TIE-fighter-shaped board.. It’s a much better game, offering a two-player battle that perfectly captures the epic final act of Return of the Jedi. 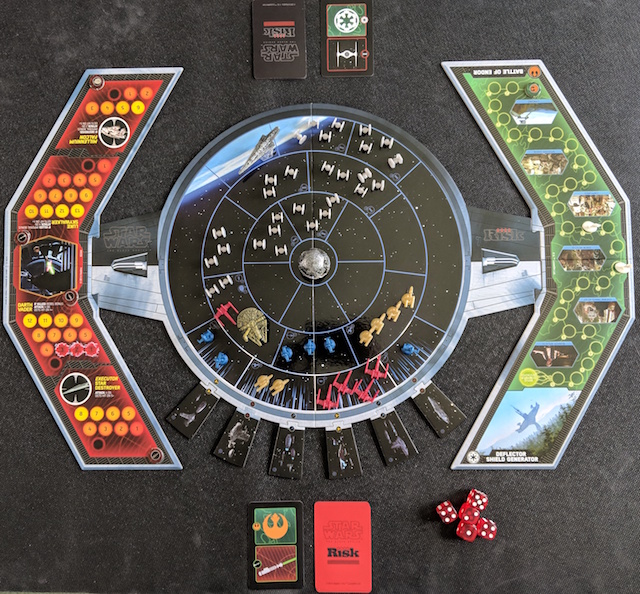 Like Risk, this is a card- and dice-driven game as players; unlike Risk, the game is waged on multiple fronts, from Luke and Vader’s final confrontation to the battle on Endor. The Empire launches swarms of TIE fighters while the Rebels are led by the legendary Millenium Falcon. Will Han and Leia have the shield generator down in time for Lando and Chewie to zoom into the fully functional Death Star and blow it up before Luke turns to the Dark Side?

Be sure to pick up the Black Series Edition, with its upgraded board, cards, and components, as shown above.