THE EXPANSE BOARD GAME Gets an Expanse-ion, DOORS AND CORNERS - Nerdist

THE EXPANSE BOARD GAME Gets an Expanse-ion, DOORS AND CORNERS

The Expanse is underrated. Sure, the television series seems to be doing just fine now that Amazon has resuscitated its near-limp body, but this is one of the best science fiction book series ever penned. It also happens to boast a cardboard adaptation that you may not realize even existed. This is an elegant and tight area control board game that has been overlooked ever since it’s 2017 release. Let’s change that.

The tabletop release is best-described as an asymmetrical conflict affair where politics ferment into war. Surprisingly, the game is not very bloody as you spread influence cubes across the galaxy trying to occupy key bases and locations from the series. Eros, Ceres, Mars–virtually every space station and settlement you’d expect is represented. They’re all waiting for the various OPA, Martian Navy, U.N, and Protogen agents to descend and claim control.

There were a few issues, mostly minor, that flared up during play. One of the main criticisms of the production is the very minimalist presentation. The board is very flat and basic, ship counters are dull, and everything feels a little subdued and lifeless–exactly opposite of the source material. This has been somewhat alleviated with the release of the expansion, Doors and Corners, whose name is derived from a key idiom repeated by protagonist Detective Josephus Miller. 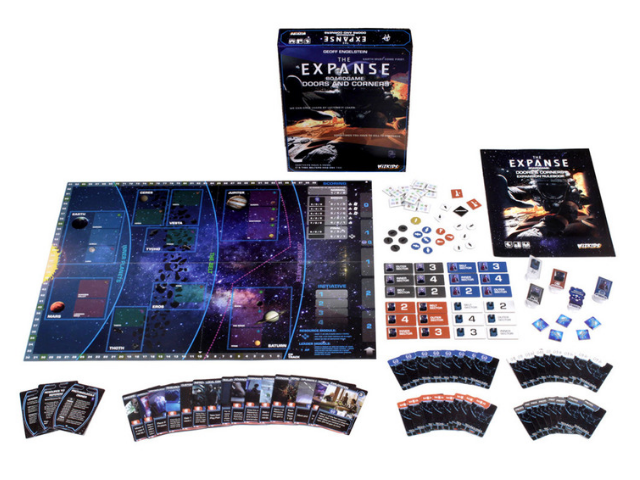 This sprucing up includes an entirely new board and ships. The former contains a small graphical boost with some stylized details and additional visual depth. The spaceship tokens have been revamped into a larger size and possess asymmetrical silhouettes on their surface.

These changes are small potatoes compared to the rules extensions. This expansion is broken down into five modules, each offering a segregated set of mechanisms you can plug into the game to alter play and present new strategic challenges to grapple with.

Tops among these additions is the technology addition. This significant upgrade replaces the original sparse special powers that numbered three per faction, buffing them up to an outstanding set of nine distinct abilities. This not only deepens the asymmetry of the design, but it presents an interesting dilemma as you’re forced to select from a set of two at each tier which guarantees a varied set of interlocking abilities among the participants.

Not only is the element of choice interesting, but the effects themselves feel more wild and significant. For instance, the OPA’s scrap ships were notoriously weak in the base game. Instead of adding two half-strength spacecraft to your pool the Belters can now cannibalize opponent’s fleets to pop these marauders out. Likewise, Mars got a bit scarier in space and Protogen a bit more devious. Earth’s UN forces were not forgotten as they can pull off shocking tricks such as locking out the event text on an action card in the offer. Each feels geared towards excitement and drama which helps elevate play. 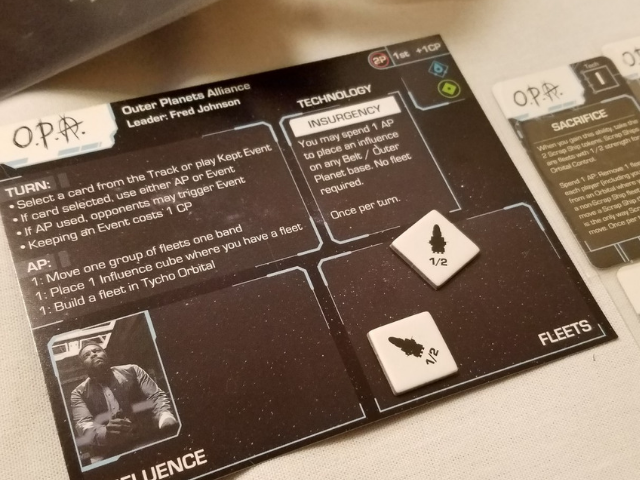 The second most significant module is the Protomolecule. For such a significant aspect of the setting, the intergalactic organism was relegated to a minor role in the base game. Now you can represent the Protomolecule with a special standee on the board. This location functions as a hotspot which provides additional high valued scoring, but it’s also at risk of devouring the entire base. This catastrophe occurs if there is a tie when assessing majority, whether that’s for first, second, or third place.

This is absolutely phenomenal. It opens up a new scoring vector while providing the shock and awe such a dangerous entity should. Players can exhibit control by dropping an influence or two on the space purposely inflicting a tie in order to cause mass destruction. This can result in loud expletives being thrown and a wonderful sense of exploding emotional investment.

The final three inclusions vary in effectiveness. They are best served on a rotation according to taste. Variable setup is perhaps the weakest, only really serving a purpose if you’ve tired of the default placement. It can open up new strategic early game options, but it eats up more time in an otherwise brisk experience. It also undercuts the thematic integrity of the base game which is undesirable.

Resource tokens are interesting in concept but not quite the home-run in execution. These sort-of-wild chits are earned by controlling locations whose resources are desired by your faction. The base game previously awarded bonus scoring, but this module changes things up by offering tactical flexibility with a new resource. I have seen some interesting uses of these tiles as they can help pay the costs of cards or to boost the action points gained, but they add some mechanical weight to the design that can be slightly burdensome. Inexperienced players will also often forget what they do and it can lead to general slowness.

The final option is the Leader module. This adds a prominent character to each faction such as Fred Johnson or Jules-Pierre Mao. The flavor introduced is solid, and their ability to function as fleets that can drop off influence is interesting. The challenge here is they require additional tokens be utilized where players can trigger scoring through their own agency.

This is a massive game changer. Normally play is beholden to the irregular tempo of scoring cards appearing in the action row–but not anymore. This new player-initiated point production is enticing and can produce stunning maneuvers that catch you off guard. The downside is they prove slightly fiddly and another element you have to worry about and track. However, they’re not overly annoying and I would recommend trying this option out, but they add another touch of weight that comes at a cost. They feel a little less smoothly integrated than the additional techs or the Protomolecule standee and they can undercut the lithe systems at work. 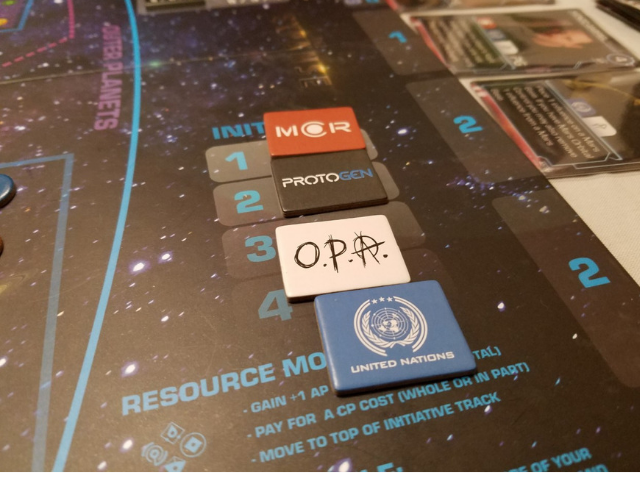 What we’re left with is a relatively successful expansion that hits all the highs and lows of modular content. While I would only include two of the five modules in every single play, the utility of the final three certainly proves a useful divergence occasionally. The sheer bloat of an all-in kitchen sink game sounds frightening, but part of my brain also really wants to take a bite. Overall, I don’t think Doors and Corners will radically alter your opinion of the base game, but it does prove a worthwhile add for fans of the original.