The End Is The Beginning For SENTINELS OF THE MULTIVERSE - Nerdist

The End Is The Beginning For SENTINELS OF THE MULTIVERSE

Seven years ago,  Sentinels of the Multiverse was released at Gen Con. The game came out right as the desire for cooperative gaming was first heating up. Many gamers prefer cooperative games because everybody wins (or loses) together. Sentinels was in the right place at the right time for many people catching onto more people interested in playing together and people getting more and more into superheroes due to the rising popularity of comic book movies. It’s quietly become one of the most well-loved franchises in tabletop gaming, spinning off into computerized versions, miniatures games, and more. The card game may be complete, but the Multiverse’s future looks very bright.

The card game’s setup is fairly simple. Each player chooses a hero and their corresponding deck that reflects the powers, skills, and abilities that makes the hero special. The players then choose a villain to face off against and sets up the bad guy’s deck and starting conditions. Finally, the players choose an environment where the big battle goes down full of events and other things that can make the heroes fight easier or much, much tougher. Ivan gives us the run down in this How To Play video:

The game has three turns; one for the heroes, one for the villain and one for the environment. Each hero gets three actions during the hero turn; play a card, use a power from a card in play and draw a card. The villain and environment turns are essentially two event phases that usually cause damage to the heroes in some way, either through direct damage or by negating or removing cards out of the heroes’ control.

This is a very basic set-up, but the strength of the design shows in how all the different decks bend the basics to give each deck a unique feel. For example, Ra, a hero who is the avatar of the Egyptian sun god, has a lot of powers that enhance or cause fire damage. The more of these that get stacked on his cards, the more powerful his attacks get. Omnitron, a villain, can put drone cards that have been destroyed back into play to give the villain a feel of one that has millions of robot minions to wear down the good guys. Each deck is also rated by a difficulty number to give guidance to players as to the complexity and the difficulty of the upcoming battle which makes Sentinels an excellent game for kids and people unfamiliar with tabletop games because scaling difficulty is easy. Although nowadays when more people than ever are familiar with superheroes, many Sentinels fans often just ask a new player what their favorite superhero is and give the player the deck of whatever hero is modeled on their favorite. 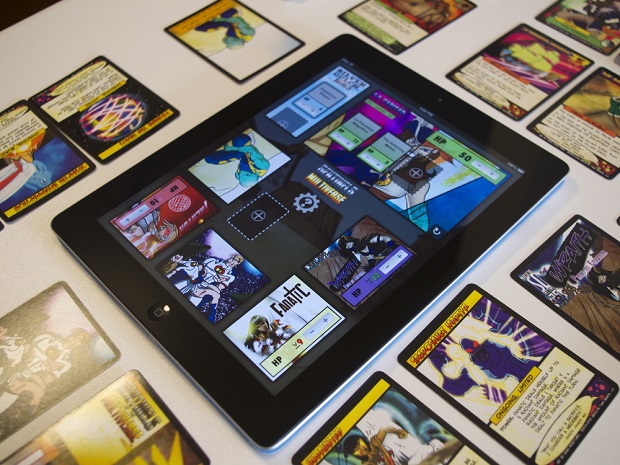 Many players also recommend the app   Sidekick, which automates many of the elements of the game. App-based gaming has been on the rise recently and the creators of Sentinels saw this coming as early as 2013. The app helps players track all the ongoing effects, buffs, debuffs and other elements of the game that can get tricky when players use some of the more advanced decks. Still, others prefer to play with the tokens in the game thanks to their comic book caption look that helps immersion.

Each expansion has added all three elements to the universe; heroes, villains, and environments. In addition, Greater Than Games has added wrinkles to pre-existing decks by releasing promo versions of characters that use the same deck but change the basic power of the hero. It’s an interesting mix between a new character and an alternate costume that changes a central element of a basic deck for added replayability. These promo cards were once only found at convention appearances or direct from the company, but they became part of the company’s largest expansion to date: Oblivaeon.

The final chapter of the Sentinels of the Multiverse card game, Oblivaeon, has been reaching Kickstarter backers for the past few months and is soon on its way to game stores around the world. We’re talking literally here: one of the main draws of the campaign was a massive box that held all the previously released cards, plus a chance for fans to catch up on any promos, mini decks and big expansions they might have missed!

The missions included in Oblivaeon much more complex and challenging than anything before. It’s an interesting choice that feels in line with one of the guiding principles of the game’s design. Sentinels of the Multiverse has been designed with the idea of building a complex comic book mythology via the game. The designers wanted the game to feel like the DC or Marvel comic book universes with all the retcons, reboots and other unusual elements built in. (The creators even started a podcast, The Letters Page, where they discuss the fictional history of the Sentinel Comics universe and how it affected the stories told within the comics) Oblivaeon feels like one of those massive comic-book crossovers in card game form, for better and for worse. 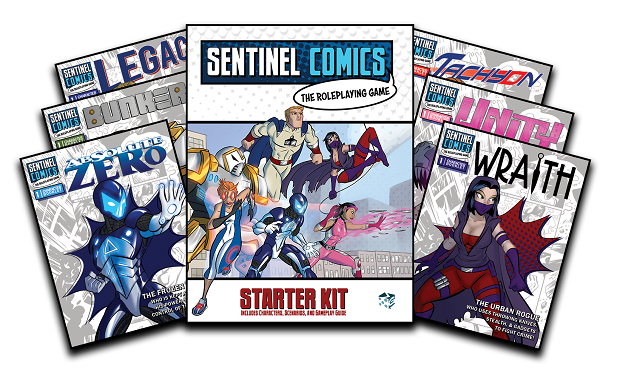 The end of the card game doesn’t mean the Sentinels Comics setting is going away any time soon. Handelabra Games created a very successful app-based version of the game that not only plays faithfully to the card game but also often illuminates combos for tabletop fans that they might have missed. Underbite Games ran a successful Kickstarter this past year for a tactical computer game. Greater Than Games has also released a Starter Set for its upcoming Sentinels Comics RPG set after the events of Obliveon. The starter features characters from the original card box but the implications are of the timeline moving forward. The characters made at the table by your players will be the next generation of Sentinels heroes as the ones from the card game step back from the spotlight. Gamers looking for an RPG that mirrors the fiction of comic books over the real world will find a lot to love in these rules.

Sentinels of the Multiverse: The Card Game might be ending, but the video games, apps, and RPG will help the Multiverse to live for a long, long time.