The Cerebral Superheroics of Pluto, An Excellent Manga For Newbies - Nerdist

The Cerebral Superheroics of Pluto, An Excellent Manga For Newbies

Superheroes in manga and Western comics aren’t actually so different, after all! In fact, their histories have plenty of parallels. And one commonality worth appreciating is the shared need to riff on the past. Just look at most reading lists for superhero neophytes; recommendations will typically include Batman: Year One, The Killing Joke, and other tomes reexamining early decades’ simpler adventures through more mature lenses.

While the suitability of latter-game deconstructionist pieces as entry-level material might seem odd at first, they make more sense the more you consider them. Instead of having to plow through dozens of issues while always minding their historical context, new readers can bite into tidier distillations more in tune with modern story tastes. So, if you only know Astro Boy as that weird kid in the speedo with a cannon that pops out of his butt, you may have a hard time wrapping your head around a Sandman Mystery Theater-style take on the character, at first. However, considering that “the Mighty Atom” is an icon as storied as Superman and Batman in Japan, and recalling the goofiness those two characters got into throughout the 50s, a serious-minded take really shouldn’t be as tough to imagine. 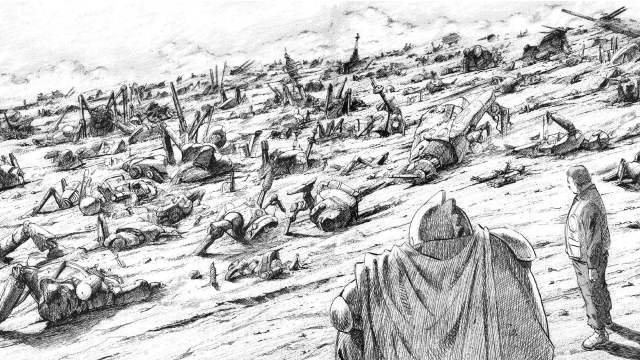 We’re talking about Pluto. Crafted by Naoki Urasawa, a creator known for ominous and cerebral mysteries like Monster and 20th Century Boys, it re-tells “The Greatest Robot on Earth,” an Astro Boy story arc anime godfather Osamu Tezuka first penned in 1964. For those who’ve never gotten into manga, this is a highly accessible first title. The storytelling is truly cinematic, with none of the chibi humor or weird idioms that can put readers off of other manga. It runs a runs a tidy six volumes, which is quite manageable for anyone intimidated by the countless installments of big titles like One Piece. It’s also an enthralling mystery with rich atmosphere, deep emotions, and a bevy of big ideas.

As in Watchmen, the plot begins with a “whodunit?” and the specter of international conflict. The world’s seven most powerful robots are being taken out by a mysterious beast, one by one. They all fought in the “39th Central Asian War,” years ago, and the investigation into their deaths stirs up a whole nest of unpleasantness. Ghosts haunt Pluto‘s future: in the machines, and on the battlefield.

So different is Urasawa’s angle on the story–Astro Boy isn’t even the main character. Instead, we follow Gessicht, a weary android detective who’ll make you think of Rick Deckard in Blade Runner. As he puts the pieces of this murder mystery together, gaps in his memory files manifest, and the answers about what really happened during the war may lie with an eternally-boyish robot, “Atom.” 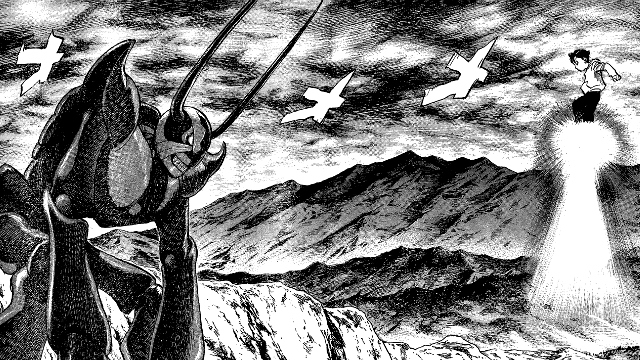 Much like Casshern Sins, the philosophical themes of man vs. machine here are less interested in the validity of synthetic’s experiences and more concerned with the existential dilemma of beings made for a singular purpose. What does a war machine do when the war’s over? Can combat heroes truly leave their battles behind and re-integrate into peaceful society? Each of the seven super-bots approaches these questions differently, grasping at answers more anxiously as the beast closes in. And while there are a wealth of spectacular battles, the conclusion definitely doesn’t hinge on whether a superhero can pound the tar out of a super villain.

If you’ve been averse to manga until now, for whatever reason, do give Pluto a try. It’s easy to pick up and will confound a stereotype or two. And when you’re done, you might even stack it on the shelf alongside some of your most revered superhero classics.

What other titles are good entry-level manga for new readers? Fill up the talkback with suggestions. We’d love to spotlight more books here.