The 4x Fantasy Game 'Heroes of Land, Air & Sea' Gets a Dose of 'Order and Chaos' - Nerdist

The 4x Fantasy Game ‘Heroes of Land, Air & Sea’ Gets a Dose of ‘Order and Chaos’

How do you expand a huge crate of a box stuffed full of 3D ships and castles? It’s simple really, add a second big box overflowing with even more 3D pieces. Order and Chaos is large and in charge, just like its predecessor Heroes of Land, Air & Sea. It’s here not only to fill your table with new plastic lizardfolk and lionkin, but to offer fantastic new gameplay options and bolster the asymmetry at the heart of the design.

Most expansions fall into the realm of disappointing. They offer new “modules” or systems ready to be bolted onto an existing framework, turning an elegant cheetah into a stumbling cat with a mountain of luggage strapped to its back.

Order and Chaos isn’t most expansions. This is a more stuff offering that doesn’t add new layers of rules or even a second booklet to paw through. There’s no confusion to be had and it all just slides in with ease. This is important because it keeps your focus on the table and the toothy goblin player eyeballing your capital city from across the channel.

It doesn’t hurt that the new factions are fantastic. The existing standard fantasy fare is bolstered by new armies of lizards, lions, skeletons, and goblins. They each possess striking new abilities and play with a unique suite of strategies.

One of the most satisfying aspects of Heroes of Land, Air and Sea is exploring the capabilities of a faction as they each offer several vectors to plumb. It will take multiple plays to experience every option for a single particular group, discounting the fact that the evolving dynamic situation of a particular play can have a large bearing on your response and tactical approach. Simply put, adding Order and Chaos is like sitting down for a new season of your favorite television series. 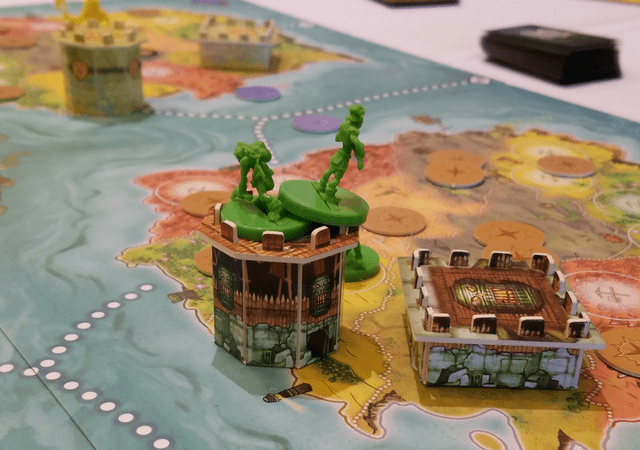 The asymmetry in this design forms a large portion of the identity. It differentiates you from your opponents and presents the tools you must harness to sow destruction and conquer virgin land. It’s the mental toy factor accompanying the physical ships, vehicles, and multi-level cities.

Take the goblins for instance. These little buggers breed like cockroaches, skittering from their dark hovels and flooding the nearby territory. With appropriate upgrades, you can recruit three serfs for five food and empty your supply of plastic gobbos. This can stun those unfamiliar with the greenskins and take everyone by surprise as it gives your resource engine a shot in the arm.

Doubling down on that horde concept is the ability to increase the strength of warriors when in groups of three or more. This means you can turn a relatively cheap cohort of soldiers into a roving swarm that will take no prisoners. We’re not even considering how they can recruit a little black-hearted suicide bomber that self-combusts and kills off opposing units. They’re one of those groups that’s annoying to compete with but fun as hell to wield.

I’d posit the four factions are the entrée of Order and Chaos, but it adds another alluring option – the possibility to play a five or six player game. To facilitate this there are new resource tokens and tactics cards, as well as a board that’s paired with the original to expand the playing space and allow for maximum carnage.

While the system admirably supports a larger group, it’s difficult to imagine many instances when you’d actually want to commit to a 5+ player struggle. The main culprit is the extended timeframe as you have more actions and people twiddling their cognitive thumbs trying to make decisions. Surprisingly, it can occasionally move along at a snappy pace with a speedy set of players as the lead/follow mechanism provides little downtime. The dynamics of a large game also mean more unexpected attacks and spells flying around, which can be delightful in its own way. Still, most are likely to forego this option and merely utilize this large box as an injection of faction options. 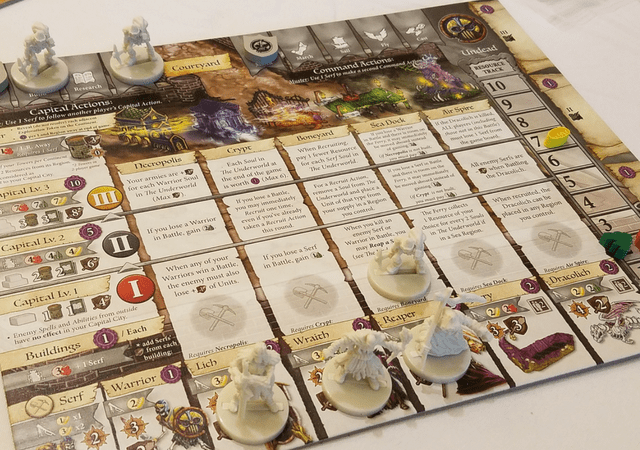 Part of me wants to just come out and say it – these factions are more interesting and exciting than those in the base game. You have undead harvesting souls, lizardfolk scurrying their armies across swamps, lions marching through desert with brute strength, and finally a wall of greenskins ready to swallow your children. They’re realized with full potential and the new options will be dizzying at first. Sometimes you just can’t feel guilty for that kid in a candy store feeling.

Have you played Heroes of Land, Air & Sea? Let us know in the comments!  And be sure to join host Becca Scott on Game the Game every Thursday here on Geek & Sundry to watch the best boardgames played with fantastic guests!