Tesla Showcases a Prototype Ventilator Made with Car Parts - Nerdist

Tesla Showcases a Prototype Ventilator Made with Car Parts

On March 20, Tesla CEO Elon Musk said in a tweet responding to reporter Ed Ludlow that he and engineers from his companies—he’s also the CEO of SpaceX and the Boring Company—were already working on ventilators to help with national shortages that have arisen thanks to the COVID-19 pandemic. Now, Tesla has released a video showcasing a prototype ventilator, even though Musk says the ventilators the company’s working on delivering “probably won’t be needed.”

In a video released by Tesla (above), several engineers from the electric car/solar roof/battery company showcase a first-round prototype ventilator, which they say is “heavily based on Tesla car parts.” They make this distinction because, as one of the engineers notes in the video, they’re aiming to build the Tesla ventilators utilizing as few components sourced from the medical industry as possible.

Yes, we’re working on ventilators, even though I think they probably won’t be needed

The car parts the Tesla engineers are using to make the ventilators are sourced from the company’s electric vehicle fleet, and include components like the Model 3’s infotainment system, which consist, in part, of a massive touchscreen display and a powerful computer. 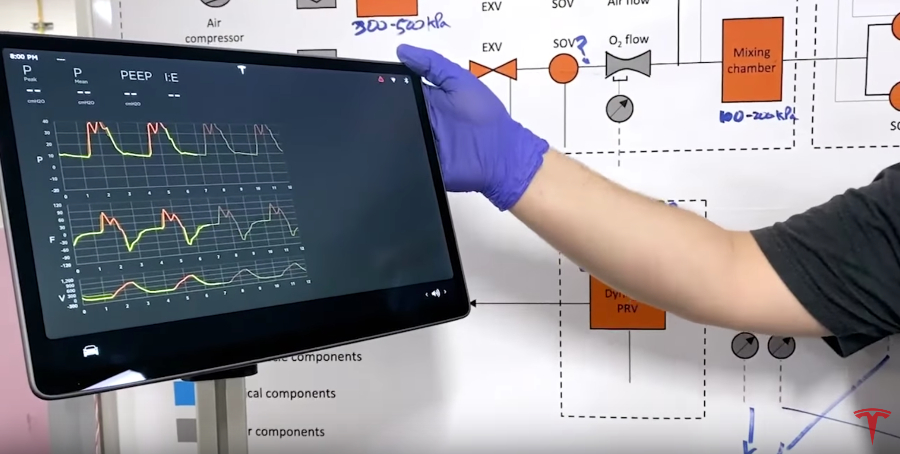 For those who haven’t been following along with all of the developments of the unfolding COVID-19 crisis, ventilator shortages in states across the U.S., as well as in other countries, have been a huge source of consternation for medical workers, and are often required to keep seriously affected patients from dying. This is because ventilators, which are machines that move breathable air into and out of the lungs, are necessary to help those who are experiencing serious respiratory issues. (The lungs are the organs that are most affected by COVID-19, as the virus that causes it, SARS-CoV-2, accesses a host’s cells via enzymes that are most abundant in the lungs.)

We have extra FDA-approved ventilators. Will ship to hospitals worldwide within Tesla delivery regions. Device & shipping cost are free. Only requirement is that the vents are needed immediately for patients, not stored in a warehouse. Please me or @Tesla know.

Although the team of Tesla engineers says that there’s still a lot of work to do with their evolving ventilator prototype, Musk himself has already delivered more than 1,200 ventilators (of varying types), which were purchased from a Chinese oversupply.

What do you think about this Tesla ventilator prototype? Let us know your thoughts in the comments!

Editor’s note: We just want to remind everyone of the CDC directives regarding the COVID-19 pandemic and the steps we can take to stop the spread, including adhering to social distancing recommendations, thorough hand-washing, and avoid large public gatherings. For more information about the CDC’s coronavirus response, visit its website here.