At the beginning of February, a viral twitter video showcased what a Tesla vehicle “sees” when its autopilot AI is enabled. The brief clip of the Tesla navigating busy streets was hard to decipher, but at the same time, highly reminiscent of the T-800’s HUD display. Now, thanks to another viral video, we’re seeing how that surreal, first-person-robot machine vision will soon enable Teslas to stop at stop signs and red lights all on their own.

Out of Spec Motoring, a group of car enthusiasts “who happen to love electric vehicles,” posted the clip above. The tweet (which comes via Reddit by user rocketmoon) says that this is a clip of Tesla’s autopilot “stopping for red lights for the first time.” Presumably, the reference to autopilot stopping the vehicle for red lights for “the first time” is due to the fact that this capability is going to be added to Tesla’s autopilot software in a forthcoming software update.

A full build of Autopilot neural networks involves 48 networks that take 70,000 GPU hours to train. Together, they output 1,000 distinct tensors (predictions) at each timestep. This is what a Tesla autopilot sees [source: https://t.co/AJrFMbHTWW] pic.twitter.com/mNLtrobk8U

Tesla’s autopilot AI utilizes machine vision and machine learning, combined with big data collected from its vehicle fleet, in order to achieve this kind of autonomy. Tesla made its one millionth car in early March and as of November of 2019, its vehicle fleet had driven over 2 billion miles collectively.

The next Autopilot update will stop for red lights and stop signs automatically. pic.twitter.com/JddyJ363Ub

It’s not clear when the latest over-the-air update for Tesla’s autopilot software is going to take place, but it’ll probably happen sooner rather than later; likey weeks or months but that’s just speculation based on timelines of previous updates. This update will also, presumably, only apply to Teslas that have the Full Self-Driving (or FSD) package, which costs $7,000. 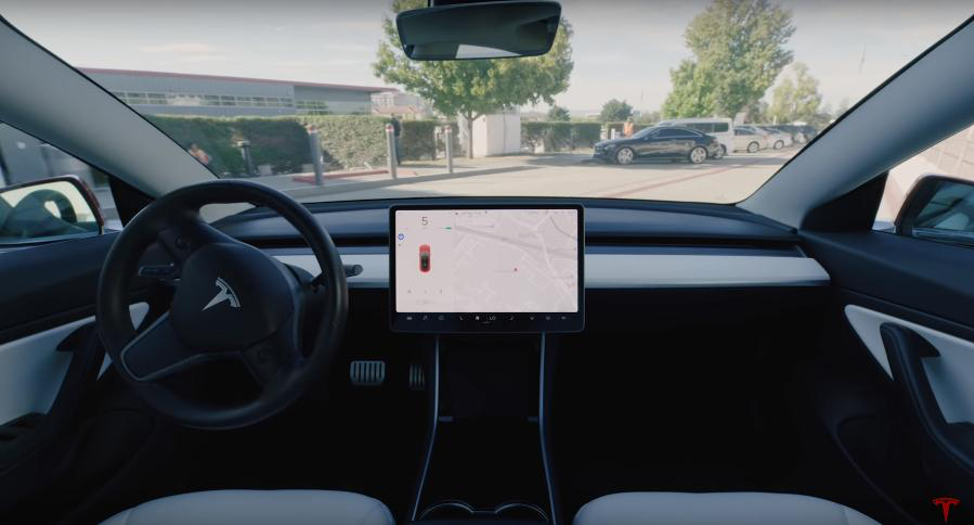 A tesla being “summoned” without its driver. Tesla

What do you think about this Tesla stopping at a red light? Are you ready to have robotaxis roaming the streets in 2020, or would you like humans to remain in control for at least another decade? Let us know your thoughts in the comments!

Featured Image: Out of Spec Motoring via Auto Vision