For many people suffering from mental health issues, discussing them with others still has a stigma attached to it. But this year, the Hope for the Day non-profit is taking on mental health stigma in an exciting way. The goal is for people to “cuss out” that stigma and drop a donation dollar in a Swear Jar. The goal is for people to say “f*** stigma” in the same way that people say “f*** cancer.”

Hope for the Day is a movement empowering the conversation on proactive suicide prevention through outreach and education. September’s Suicide Prevention Month campaign is set to raise money by confronting mental health’s biggest silencing force, which remains the stigma surrounding it. As they say in the video below, “the more we talk about mental health, the more we realize that we’re not alone.”

Hope For The Day asks participants to create a post on social media where you swear at a mental health stigma. The curse words, of course, are of your own choosing (although we are always partial to a good f-bomb). You then share your story on social media using the hashtag #StigmaSwearJar. You can also support the campaign by simply donating on StigmaSwearJar.com. 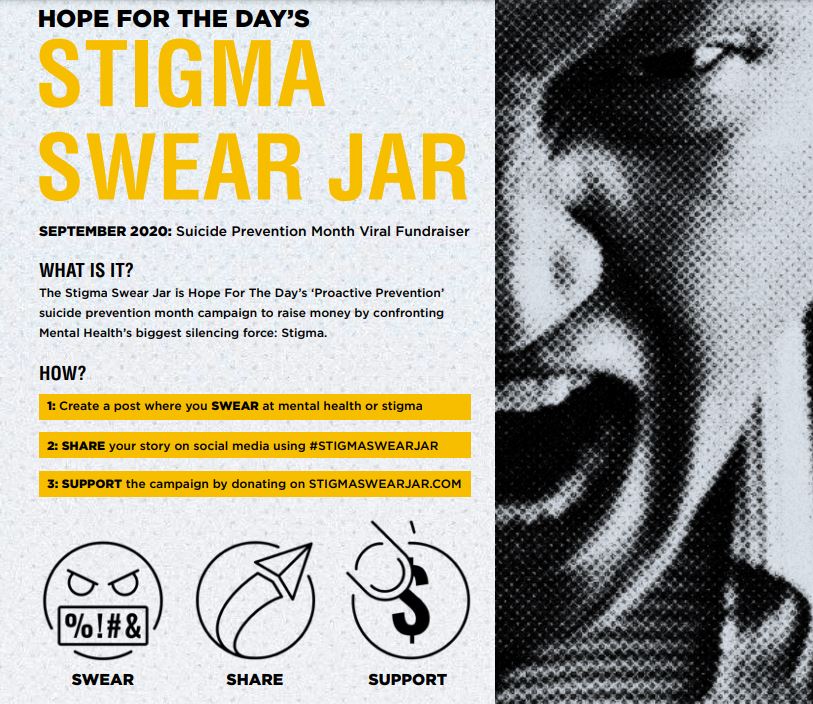 Hope For The Day

Hope For The Day has a goal of $200,000. So, just where does the money all go? 100 percent of the proceeds support HFTD’s proactive suicide prevention and mental health education programs. The more folks out there cuss stigma out on their socials and tell stigma just where to go and stick it, the more we all can educate ourselves and others about the realities of mental health issues.

Through outreach, education, and action, we can equip one another with the right tools to be proactive in our communities. For more information on how you can help, be sure to head over to HFTD.org.

Featured Image: Hope for the Day