Here's How We Can Move the Sun with 'Stellar Engines' - Nerdist

Here’s How We Can Move the Sun with ‘Stellar Engines’

Humanity is a relatively young species, and we’re used to building structures and dealing with issues that require years, decades, centuries, and, in rare instances, millennia of effort. But in the distant future, we’ll likely have to deal with far more monumental tasks that will require millions of years of work. One of these tasks may be moving our entire solar system out of the way of incoming danger, and while that seems downright impossible, Kurzgesagt’s latest video describes how we could complete the mission by deploying unthinkably powerful machines known as “stellar engines.”

For those unfamiliar with Kurzgesagt, it’s a popular YouTube channel that’s covered countless science and tech-focused topics, such as what would happen if a nuclear bomb went off in the middle of a city, what the future of genetic engineering may look like, and gamma ray bursts that may kill us all. For its last video of 2019, the channel turned its attention toward the possibility of moving our entire solar system utilizing two hypothetical megastructures that would be able to move our sun tens of lightyears from its current orbit around the Milky Way Galaxy’s center, and shockingly don’t break any known laws of physics.

A look at how a Shkadov thruster would move the sun.

The video focuses on two types of stellar engine that could potentially help humanity to move the sun multiple parsecs in one or another direction, including one type that was established in the 20th century by scientist and engineer, Leonid Mikhailovich Shkadov, as well as one developed specifically for this Kurzgesagt video by Assistant Professor of Physics at Illinois State University, Matthew Caplan. The video notes that Caplan’s idea for a stellar engine is actually feasible, just like Shkadov’s; Caplan even published a paper describing it in the peer-reviewed journal, Acta Astronautica.

Both Shkadov and Caplan’s concepts for stellar engines—the former’s dubbed the “Shkadov thruster,” the latter’s, the “Caplan thruster”—essentially use the sun’s own energy to power what are effectively gargantuan rocket engines. Shkadov’s thruster, the far simpler of the two designs, uses an ultra-thin parabolic mirror to bounce the sun’s radiating photons in the direction opposite of that in which it’s moving the sun. And if it seems like there’s no way to use a stream of photons to move something as massive as a star, keep in mind that the sun produces a quattuordecillion (that’s one with 45 zeroes behind it) of photons per second. 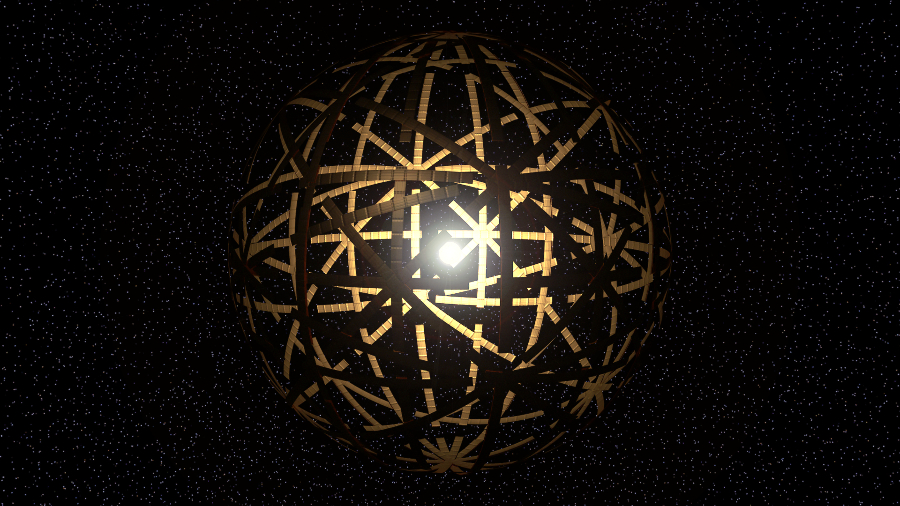 A 3D rendering of a Dyson Sphere. Kevin Gill

Caplan’s thruster, which eschew’s simplicity in favor of speed, calls for a space station platform that gathers power predominately from a Dyson Sphere, which is a theoretical sphere of solar power-collection devices that would revolve around the sun or other star. Using the power collected from the Dyson Sphere, as well as matter blown off the sun’s surface by the Dyson Sphere, Caplan’s thruster would spool up fusion reactors that would, in turn, shoot out a billion-degree jet of particles from the space station platform in the opposite direction from which it would be moving its targeted star. It should be noted that there are other critical facets of the Caplan thruster, but that’s the essence of how it works.

As far as when humanity could build either one of these star-moving thrusters, again, that would probably take place millions of years from now. Oh, and if you’re wondering where we’d collect the materials to build one of these dream machines, that would require a whole ‘nother set of mind-boggling science and technology breakthroughs. One proposal is to blow up Mercury for its materials, for example, although if it comes down to that, maybe we should just consider moving to a new star system.

Matching our latest video, we designed a poster on Stellar Engines. Go check it out here: https://t.co/5ZLTvFdBrU pic.twitter.com/TxIy4AnCtM

What do you think about these stellar engines? Do you think humanity will ever be able to build one of these megastructures in the distant future, or will they end up being scrapped as less reasonable than just hopping over to another star’s local neighborhood? Give us your thoughts in the comments!