Feel like you’re ready to scoop? Needing a mulligan when it comes to breaking into the card-game scene? Have no idea what anything we just said even means? Well, don’t feel bad. If you’ve never had the chance to play Magic: The Gathering, you’ve been missing out on one of the greatest card games and social experiences in the geek world. If you’re like I was a few years ago, the idea of jumping into a bizarre and unknown world of fantasy card games seems a bit daunting.  The game has been around for over 20 years, and is made up of various levels of skilled players. But when I took the time to learn the rules, the tactics, and the various different approaches, it became rather easy to understand why people would find such comfort and enjoyment in this incredibly diverse and beautifully strategic game. Whether you know little or nothing about it, we’re here to help get you started. All you need is an open mind, a little imagination, and a bit of strategy, and you’ll be set for a bright and entertaining future in MTG. Here’s your Magic: The Gathering Starter Pack! 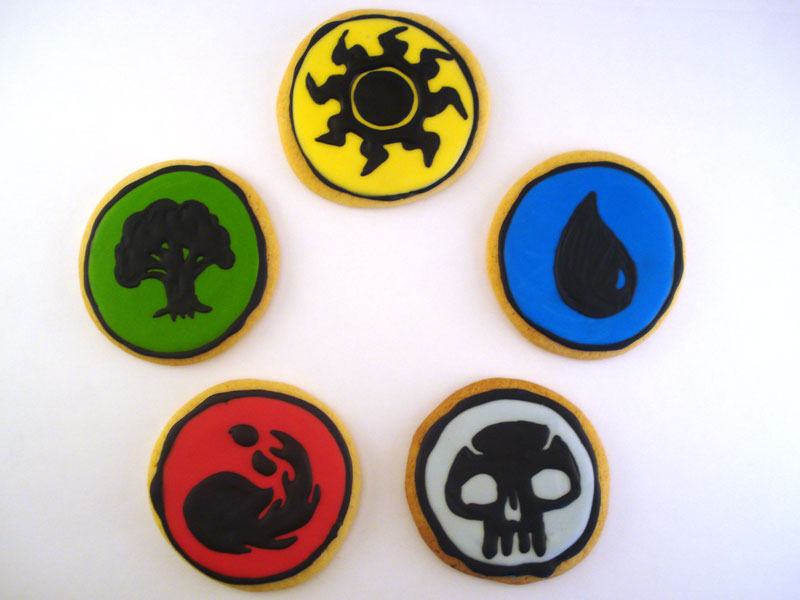 Step 1 – Start with the Basics

Don’t get us wrong, Magic: The Gathering is a complicated, ever-evolving game. And depending on who you’re playing with, certain “house rules” may come into effect. However, that doesn’t mean you’re too late to the party. The basics have never changed. There are 5 basic land types, each with accompanying creatures, spells, enchantments, and instants. The basic lands are: Mountains, Islands, Plains, Forests, and Swamps.

Now here’s where your first strategic move comes into play. Depending on the type of land you have in your deck, that’s the type of magic, or mana, you’ll be playing. Spells cost mana. Mountains are where you’re likely to find goblins, dragons, and various other mountain dwellers in these decks. Islands are often filled with plenty of merfolk and various sea creatures. Plains decks have a bit of angelic magic to them. Knights, lions, and angels are often associated with these decks. With forests, you’ll be likely to find spiders, elves, and various beasts in these decks.

Swamps are where you’ll find vampires, zombies, and other revolting creatures. Each type of land.had a different strength and weakness, some revolving around direct attacks, others focusing on life gaining, and many more options.  So choose the type of game you want to play, follow the rules on the cards, and you’re already well on your way to becoming a Magic: The Gathering player. As you draw more land cards, you’ll be able to play larger cards and so forth. REMEMBER: if you draw your first hand and you DO NOT have any land cards, you can double check with the table and take what is known as a mulligan, where you will re-draw until you get a few land cards. Otherwise, you’ll have trouble getting your game out of the starting gate. Some gamers have different views on mulligans, so make sure you follow their house rules. 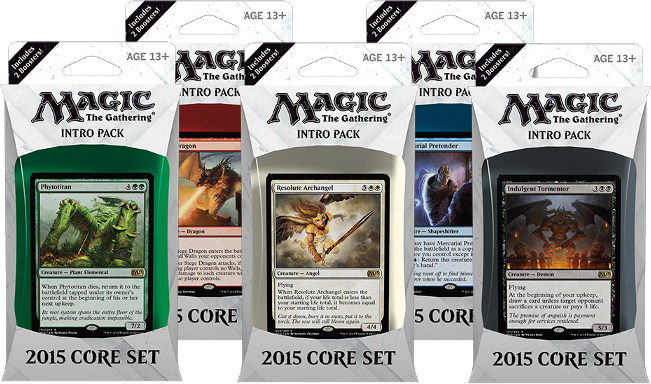 Step 2 – How to Build Your Deck

My first suggestion is to find a friend who has an extra deck lying around, and just start by playing with their cards for a round or two. You may find that Magic: The Gathering isn’t your cup of tea, so you shouldn’t have to buy a deck just to regret it later. If you DO think that you’re ready for a future in MTG, there are a few options.

The easiest option, in this gamer’s opinion, is to buy an Intro Pack and build from there. You can find these at your local hobby store or department store for about $10-15…not too bad for a deck of which you’ll get endless uses out. You’ll get a deck made up of two types of basic land and a booster pack; these generally have a great assortment of cards and aren’t too difficult to understand. Often times you’ll come across cards with complicated rules and abilities, which is probably what you should avoid while you’re still in the beginning stage. Leave those to the more experienced gamers. As you learn your deck and its strengths and weaknesses, you can buy boosters or search for cards online to bring that extra “umph” to your game. Stick with the two land types if you can. More than two land types might be too difficult to handle right off the bat, but it’s a common strategy…so just be warned. Make sure to check out the newest decks too, as oftentime you’ll find a new type of play that your competitors might not be familiar with yet. 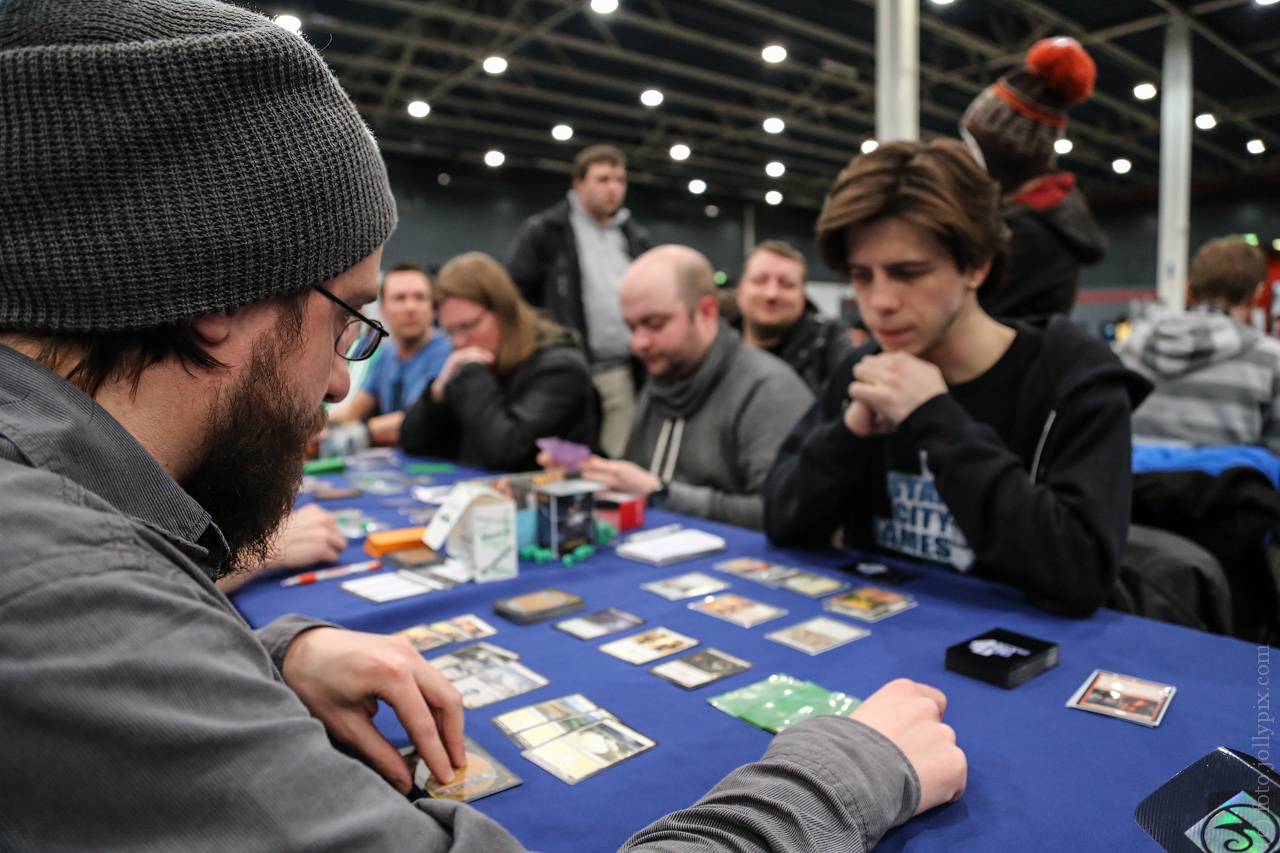 This is probably the most important step: choose your friends wisely. The hardest part about starting a new hobby or game is finding the people who will be supportive and understanding if you stumble out of the gate. Don’t play against people who are going to give you attitude or be impatient if you don’t understand all the rules at first. Believe me, there are a lot of rules that you’ll discover as you play, and as a gamer who has been playing for the better part of 5 years, I’m still learning new things all the time. But just make sure that the folks you’re playing with know you’re a beginner, and will help give you the time and the education to get established as a MTG gamer. This ultimately makes for a more entertaining experience. If you play in a more laid-back atmosphere, you’ll learn more and spend less time worrying about ticking off the pro at the end of the table. You’ll quickly learn the pacing, lingo, and strategies. 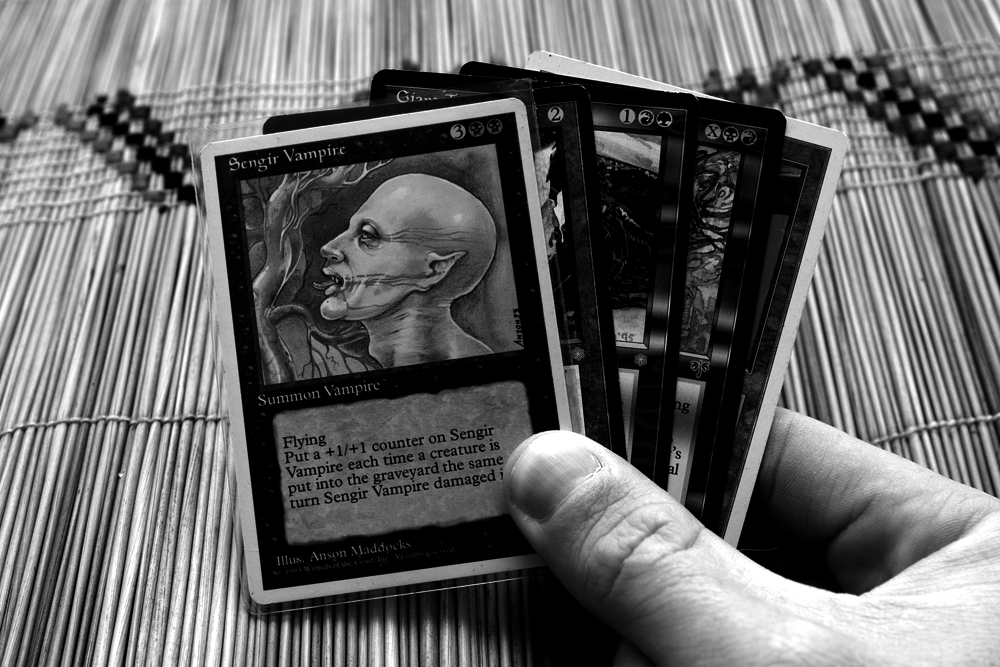 Magic: The Gathering is truly a game of learning. You’ll see infinite strategies, rules, and card types come into play, and you’ll have the unique opportunity to see them for the first time. Use this experience to learn what type of play you like the best, and build future decks from there. Believe me, this game can get intense, but if you go into it with an open mind and a willingness to learn from the good and the bad, it can really be addicting.  You’re going to have ups and downs…it’s a guarantee. But while you’ll make enemies on the battlefield, you’ll also make friends in real life. So just give it a try. You’ll probably be surprised how quickly you get the hang of it.