Go into the Chiss' Past with This THRAWN: GREATER GOOD Excerpt - Nerdist

Go into the Chiss’ Past with This THRAWN: GREATER GOOD Excerpt

The Chiss Ascendancy is in danger. We learned about a mysterious threat to the Chiss in Thrawn Ascendancy: Chaos Rising. That book started a new Thrawn-centric trilogy, which makes sense as Thrawn is quite a beloved character in the Star Wars galaxy. The next book in the trilogy by author Timothy Zahn is nearly here, and Nerdist has an exclusive excerpt from Thrawn Ascendancy: Greater Good.

These books take place during the era of the Clone Wars but far away from the battling Republic and Separatists. The Chiss have their own issues, anyway. And their true enemy is operating from the shadows, evading detection. Thrawn and the Expansionary Defense Fleet race to determine what’s happening and how to protect the Chiss Ascendancy. 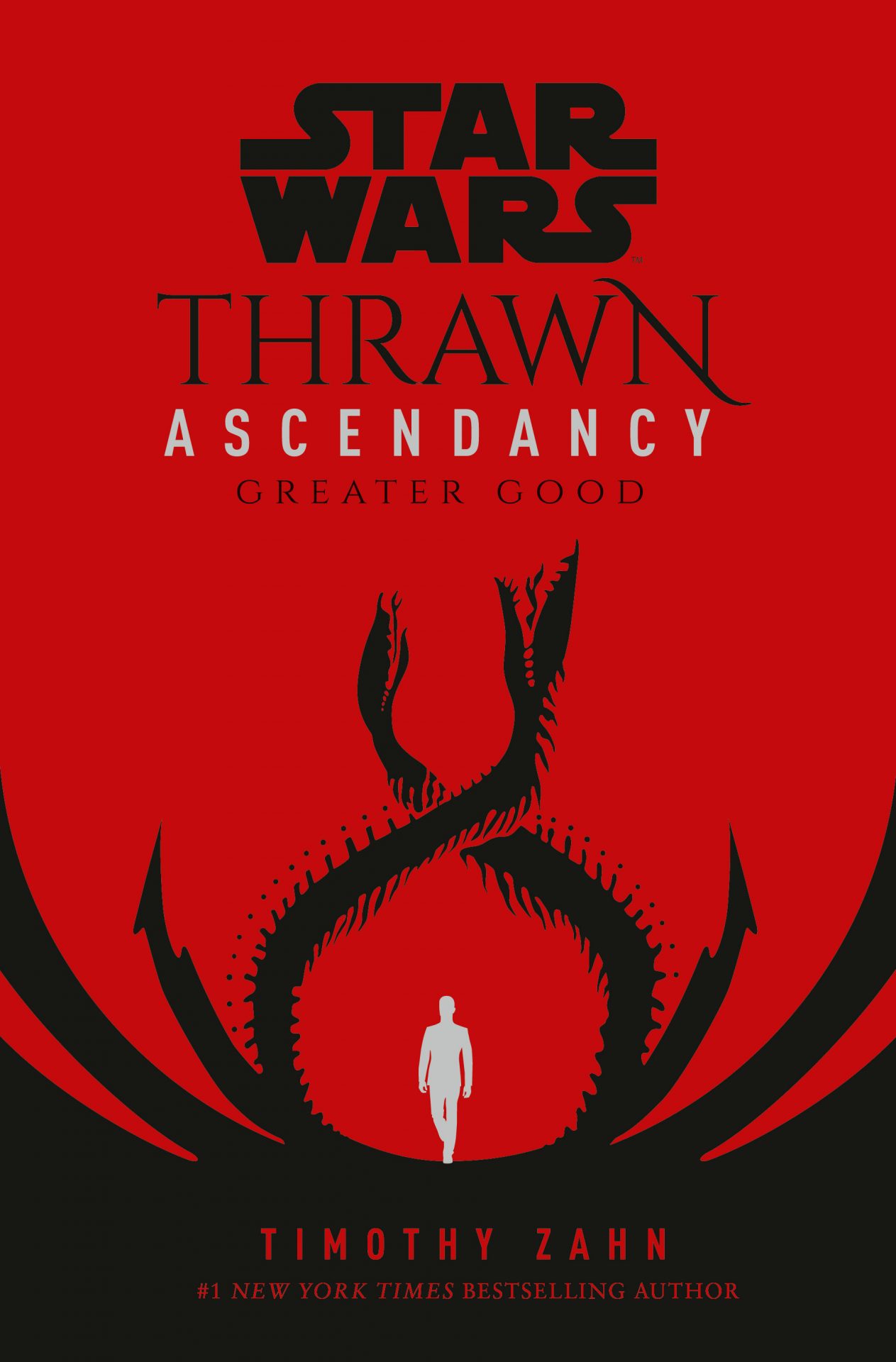 If you read the first book of the Thrawn Ascendancy trilogy, Chaos Rising, you know memories played a crucial part. They detailed Thrawn’s formative years as a cadet and gave us more insight into how he became the brilliant mastermind we know. In Greater Good, the interstitial memory chapters return, but with a new perspective and shedding light on the machinations of the mysterious villains who have terrible plans for the Chiss Ascendancy. This is the first of those memory chapters.

“There,” Haplif of the Agbui said, pointing through the scout ship’s viewport at the half-lit planet in front of them. “You can’t see the damage from here—”

“I see it quite clearly,” the veiled being seated beside him said calmly in that exotic voice of his, that strange mix­ture of rasping and melodic wrapped up inside an obscure accent. “It extends across the entire planet, I presume?”

“It does,” Haplif confirmed. He’d never seen Jixtus with­out his cloak and hood, his gloves concealing his hands, his black veil covering his face. He had no idea what the creature looked like.

But that voice would stay with him forever.

“Then you can add this to your list of successes,” Jixtus said. “Well done.”

“Thank you, my lord,” Haplif said, squinting a little. Now that Jixtus mentioned it, there were indeed subtle signs of the global destruction down there. The clouds on the sun­lit side, which would be glistening white on an untouched world, were here laced with gray and black from the fire and blast debris thrown up from the vicious civil war he and his team had engineered. On the night side, the clus­ters of city lights that had once shone cheerfully in the darkness had all but vanished.

Haplif smiled to himself. The near-total destruction of an entire world, and it had all been accomplished in barely six months. Six months.

Yes. He was that good.

Haplif scowled. Trust Jixtus to take the shine off a crown­ing moment. “Only temporarily,” he said. “The Nikardun are taking care of it.”

“Really,” Jixtus said. “You were told not to have any di­rect contact with them.”

“I had no choice,” Haplif said. “You told me you didn’t want anyone knowing what happened here. The planet never had a communications triad, you were out of range of the standard transmitters, and we didn’t have any ships of our own. One of Yiv’s ships was poking around, so I con­tacted them.”

For a long moment Jixtus was silent. “You did say you didn’t want anyone knowing about the war, didn’t you?” Haplif prompted.

“Yes, of course,” Jixtus said, sounding a bit put out. “I trust you at least kept my name out of it?”

“Your name and mine both,” Haplif assured him. “I didn’t identify or locate the system for them, either. I just gave the ship’s vector and told them it was a group trying to recruit forces against General Yiv. Naturally, they headed after them in hot pursuit, with no doubt righteous fervor in their hearts and minds.”

“No doubt,” Jixtus said. “You understand Yiv and his people very well.”

“I understand everyone very well,” Haplif said. It wasn’t bragging, after all, if it was true.

“I presume you gave the Nikardun their destination?”

“I’m not absolutely sure they had one,” Haplif said, key­ing a line across the navigational display. “All we had was their departure vector, and they mostly took that because it was as far away from the last group of enemy ships as possible. I only know of one advanced civilization along that route, and I’m not sure the refugees were able to get any data on it with the government computers demol­ished.”

“Still, there’s a great deal of life in the Chaos,” Jixtus said. “Even our records presumably show only a fraction of it.”

“That’s what they’re counting on,” Haplif said. “From what the Magys said—that’s their title for their leader—from what she said before they took off, I gather the plan was to check each likely system along their path until they found someone they could appeal to for sanctuary. Failing that, they were hoping to find an uninhabited but livable world where they could go to ground. All the Nikardun have to do is follow that same plan, and they’ll eventually find whoever takes them in.”

“Unless you were lied to,” Jixtus said. “Perhaps the refu­gees know exactly where they’re going.”

Haplif scowled. Unlikely, but possible. His talent for reading and analyzing cultures was unmatched, but indi­viduals could still surprise him, especially those he hadn’t had good opportunities to read. If the Magys had been deliberately vague so as to throw off any possibility of pur­suit . . .

He felt his throat briefly palpitate. Jixtus was playing with him, he realized belatedly. Poking at the very set of skills that made him so valuable, teasing the possibility that Haplif wasn’t as good as he knew he was. “It doesn’t matter,” he said. “The Nikardun are following. Whether the refugees reach a sanctuary and are destroyed there or whether they run out of fuel and air and die in space, the end result is the same.”

“But you hope the latter?”

Haplif shrugged. “Fewer chances of loose ends,” he said, keeping his voice casual. “But as I said, the end is the same.” He smiled. “The end that only I could orchestrate.”

Jixtus chuckled, a dry, raspy sort of sound. “Never let it be said that Haplif of the Agbui lacks confidence and pride.”

“Even when his employer suggests those qualities are unwarranted?”

“Especially then,” Jixtus said. “But beware of overconfi­dence. Eyes held high in pride are less able to see uneven ground ahead.”

“Fortunately for your needs, I can see both,” Haplif said. “At any rate, we’re finished here. We can go home now?”

“You spoke of a Nikardun ship,” Jixtus said. “Are there bases in the area?”

“A couple of small ones, yes,” Haplif said. “Listening and relay points, with limited defenses. They’re not likely to send any warships roaring out to bother anyone.”

“Yet you were able to persuade them to do just that,” Jixtus pointed out. “Others might be able to, as well. Not to mention, Yiv himself may find a new task for them.”

“Well, even if he does, they’re not likely to find this place,” Haplif said doggedly. “The people here keep mostly to themselves these days. I’m not sure any of them has even been outside the system in decades.”

“Except for the refugee ship.”

“Which will be gone soon enough.”

“I trust you’re right,” Jixtus said. “As to your question. Since you mention my needs and your unique ability to fulfill them, there’s one more job I want you to do.”

Haplif looked sideways at the other, a bitter taste in his mouth. He should have guessed this wouldn’t be the end of it, despite Jixtus’s promise. As Haplif understood most beings, he also understood his employer.

Or did he? With the obscuring cloak, hood, and veil hid­ing all the usual cues of face and eyes, Jixtus could be nearly anyone, from virtually any bipedal species. For that matter, for all the evidence of Haplif’s eyes and ears, he might be sitting next to one of the demons from Agbui myth he’d so often been threatened with as a child.

He shook the thought away. Superstitious nonsense. “You promised we would be done.”

“I’ve changed my mind,” Jixtus said calmly. “What do you know about the Chiss?”

If you’d rather listen to the excerpt, we have that for you too.