London-based footwear company Po-Zu unveiled the latest styles in its series of popular Star Wars-themed shoe line last week at Rhode Island Comic Con with the debut of Rey and Kylo Ren unisex sneakers. Though the collection has paid tribute to both the original Star Wars trilogy and Episodes VII, VIII and IX, the release marks the first time that Po-Zu has created styles for these two characters, featuring details that evoke their clothing in the films as well as their personality. 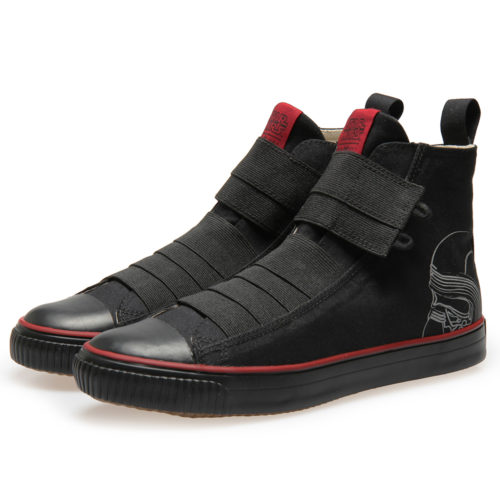 Like the companyâ€™s previous sneaker offerings, the Rey and Kylo styles vaguely echo the design and shape of a classic Converse Chuck Taylor (or maybe PF Flyers if youâ€™re hip) high top, modified with interesting details to reflect what they wear on screen. Kylo Ren wears strappy leather boots in the film, for example, and Po-Zuâ€™s sneaker features layered canvas that looks similar across the tongue and closes around the ankle.Rey, on the other hand, wears a wool boot in the film, and the sneaker is a little more straightforwardâ€”a little less â€œlong time ago in a galaxy far, far awayâ€ and more â€œIâ€™ll pay to rep my favorite character 2018.” That said, like the Kylo Ren shoe, it features a drawing of the character to make sure fellow Star Wars fans know for whom youâ€™re stanning. (The fact that both styles are unisex makes them a great option regardless whether you prefer the Dark or Light Sides.) 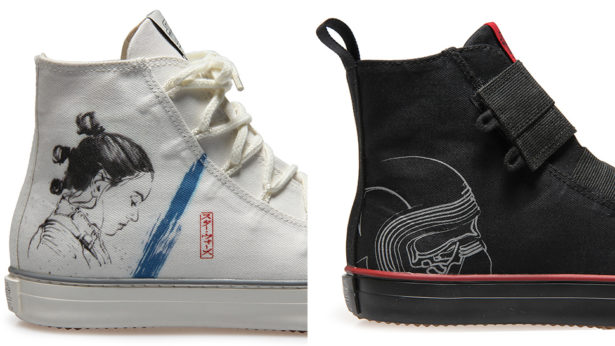 The release of these two styles bring Po-Zuâ€™s Star Wars line to 36 different styles, featuring homages to Finn, Stromtroopers, The Resistance, the Millennium Falcon,Â  Han Solo, and more. The brandâ€™s appearance at Rhode Island Comic Con launched the first opportunities for fans to pre-order the shoes, which will start shipping in January 2019â€”too late for Christmas, but well in advance of 2019 Star Wars Celebration Chicago in April. Click here to pre-order your pair for on 75â‚¬ (weâ€™re not sure how much that is in Cantocoins but I’m sure somebody out there has done that math for us).