THE RISE OF SKYWALKER Thanksgiving Teaser Uses “Duel of the Fates”

J.J. Abrams’ Star Wars sequel trilogy movies have something of a Thanksgiving tradition here in the States. The very first–and very brief–teaser for The Force Awakens was released on the Thanksgiving holiday back in 2014. This year, the official Star Wars channels dropped another satisfying teaser for Abrams’ next Star Wars film, The Rise of Skywalker, which is out in just a few short weeks.

This teaser, a 30-second TV spot, is loaded with all sorts of Star Wars goodies. But the thing that immediately jumps out: The footage is set to John Williams’ prequel tune “Duel of the Fates,” which plays during a pivotal moment in The Phantom Menace. It’s the first time we’ve heard prominent prequel-era music associated with the sequel trilogy, and we’re loving it!

The “Duel of the Fates” theme turns into the “Imperial March” in the promo, blending a few different Dark Side motifs together. We also hear a voiceover of Emperor Palpatine make a quite literal statement about the upcoming movie: “This will be the final word in the story of Skywalker.” But the movie is called Rise of Skywalker—emphasis on “rise”—so we have a feeling he might be wrong.

This whole teaser is loaded with exciting stuff. We’re pretty surprised at just how much they’re showing us in these commercials, but we’re not complaining! There’s new footage of the Millennium Falcon being chased by TIE Fighters through some sort of icy structure (note the icicles dripping from the ceiling), and it looks like Finn is in the gunner position. 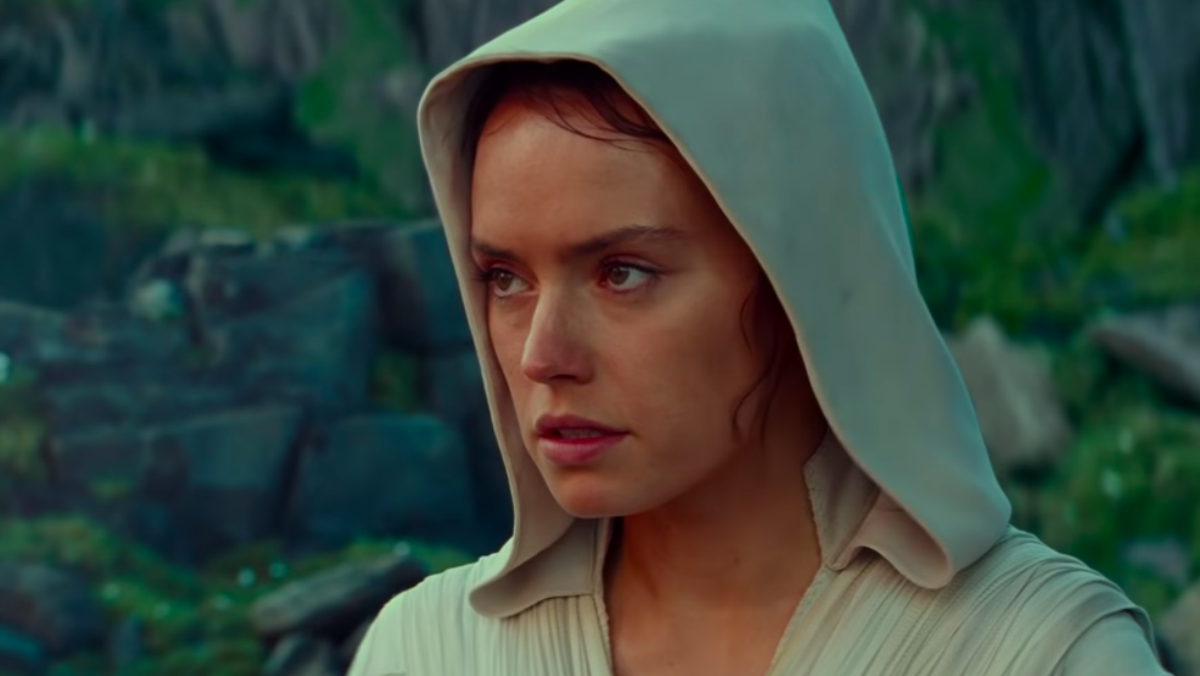 We see Poe yell, “No!” as an X-Wing is shot down during a space battle and crashes into a Star Destroyer. We also see a fascinating shot of a hooded Rey, standing on what looks like Ahch-To, looking at a burning TIE Fighter, most likely Kylo’s. Is it Kylo’s actual ship, which she seemingly took down in that very first teaser promo, or is it a vision? She’s looking pretty solemn; maybe the darkness within her is keeping her down.

There’s a quick shot of new alien Babu Frik laughing at something, which appears to be from that emotional scene with C-3PO in the previous trailer. And then we get a series of quick shots of Kylo Ren on some charred, creepy-looking planet. He walks underneath a giant black rock with lightning flashing in the background. Is this Palpatine’s lair? Wherever it is, it looks like Rey winds up there as well.

So much to chew on, which makes this is a perfect little Thanksgiving treat. Are we going to see even more footage from The Rise of Skywalker in the next few weeks?  We still have no real idea what this movie is all about, despite the many teasers. And we still haven’t seen Emperor Palpatine in all of his terrifying glory, although we’ve heard him plenty of times.

We don’t have much longer to wait to start piecing things together. Star Wars: The Rise of Skywalker lands in theaters on December 20.