The First Order is coming to the Colossus platform when Star Wars Resistance returns from its midseason break. The animated Star Wars show set in the sequel trilogy era follows Resistance spy Kazuda Xiono on a top-secret mission on the platform, where his already challenging job of spying has only been getting harder. The evil organization is tightening their grip on the galaxy. The midseason trailer shows General Hux’s fear-invoking speech from The Force Awakens being broadcast throughout the galaxy…and then stormtroopers arriving at Colossus.

Uh-oh.The Force AwakensÂ and The Last Jedi have shown the extent of the First Order’s might; it’s not a threat to take lightly. Even with the Aces, a group of crazy fast skilled pilots, protecting the platform, how will Kaz and his friends keep everyone safe? How will the Resistance help them? It’s not like they only have to worry about highly trained soldiers; pirates are also causing problems. This is all very stressful. 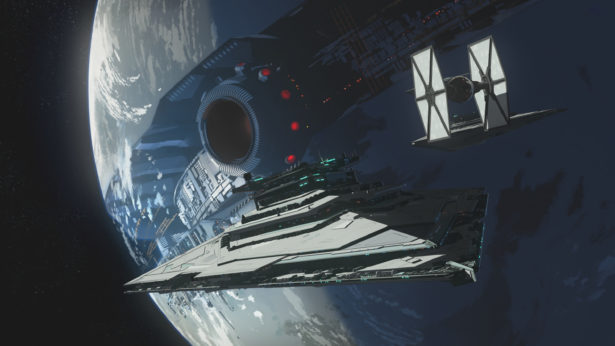 And the midseason trailer isn’t the only news! Disney has renewed Star Wars Resistance for a second season. I’m curious to see how far the show will go into the sequel trilogy timeline and how quickly; how close will the story get to Episode IX before the film is released in December?Star Wars Resistance returns to Disney Channel with the rest of season one on Sunday, January 13. Season two will premiere in fall 2019.