Unpacking STAR WARS Fan Theories About the Anime YOUR NAME

In 2016, the Japanese animation studio CoMix Wave Films released what would become the highest-grossing anime film of all time. The movie, Your Name, tells the story of two Japanese high schoolers—Mitsuha and Taki—who begin mysteriously swapping bodies, only to learn that they are separated not only by distance but by time. It’s a beautiful love story about soulmates, missed connections, and the lengths we’ll go to protect the people we care about. It’s also—random though it may seem—a movie that often comes up in conversations around the Star Wars sequel trilogy and the two main characters at its center: Rey and Kylo.

The idea of fate and soulmates—be they romantic or spiritual in nature—is at the center of both The Force Awakens and The Last Jedi. Rey and Kylo Ren learn that they’re equals in the Force; she represents the light and he the dark, and they’re drawn to one another because of this connection. In The Last Jedi, they communicate in a way that’s similar to that of Mitsuha and Taki. Some sort of cosmic energy fuels a bond so strong, it transcends the laws of physics.

Rey and Kylo shippers have used Your Name to draw parallels between the characters since the anime film hit theaters—their speculation fueled by directors J.J. Abrams and Rian Johnson—and it’s starting to look like they were right all along. New footage from The Rise of Skywalker hints that it could be literally referencing something called the “red string of fate”—an idea seen in Your Name and other anime, and an important concept in East Asian legend.

Here’s a closer look at what the “red string of fate” represents, how the filmmakers are teasing a possible connection to Star Wars, and what the fans are saying—and creating—in the meantime.

The Red String of Fate 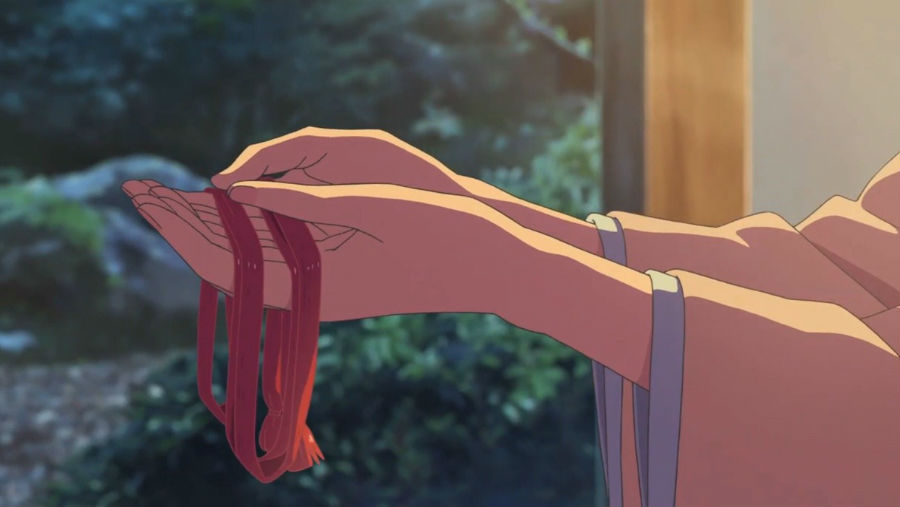 In Your Name, Mitsuha wears a red ribbon, a bit of imagery that (literally) threads its way through the entire film. Red string is a concept seen in a lost of East Asian culture, and is derived from legend; it’s the belief that there is an unseen red string tied to the finger of two people destined to meet. Those connected are meant to be lovers, despite the circumstance. Time, distance, or any other complications don’t matter—eventually, the string will lead them to one another.

The Star Wars series has been heavily influenced by Asian culture since George Lucas’ original films. In the new footage from The Rise of Skywalker, we see Rey with her own red ribbon; it’s tied to her wrist as she trains with her lightsaber in a jungle setting. Is this her own “red string of fate”?

The filmmakers have fueled these theories

J.J. Abrams and Rian Johnson, the two directors of the Star Wars sequel trilogy, have a lot to do with why the connection between Your Name and Star Wars exists. In 2017, Abrams scooped up the rights to direct a live-action American remake of Your Name, which will likely be his first big project after The Rise of Skywalker. Abrams is known for his referential projects, and if he’s associated with Your Name, he’s clearly a fan of the original. It doesn’t seem like a stretch that he’d place concepts from that movie into his Star Wars film.

Johnson made an even more direct reference. When he was working on The Last Jedi, he tweeted out images of red string. 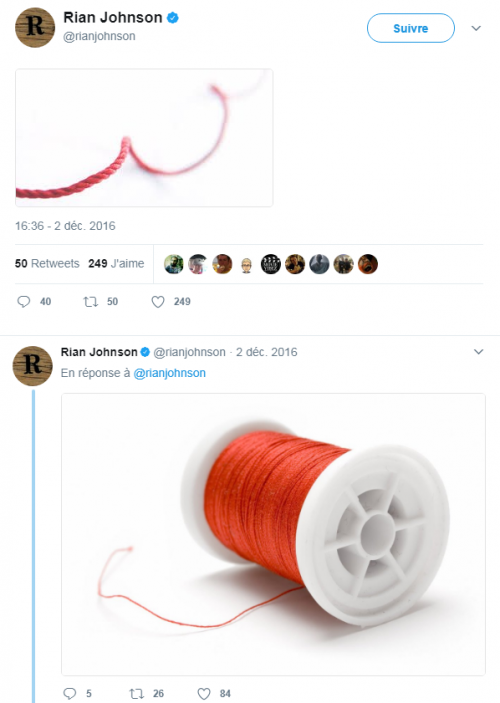 That the tweets have since been deleted only fuels the fire. Was he teasing a romantic connection between Rey and Kylo?

The fans have been saying it all along

It’s not just the filmmakers who make us wonder about Your Name and “the red string of fate” in Star Wars. Fans have been making connections between the two for years. The women-led podcast Skytalkers devoted an episode to Reylo where they talked about the red string theory, and it’s a common motif in Star Wars fan art.

“Red String of Fate: the two connected by the red thread are destined lovers, regardless of place, time, or circumstances. This magical cord may stretch or tangle, but never break”
More #reylo #fanart pic.twitter.com/CRzodk9fwD

Many fans were also immediately aware of the red string that’s seen on Rey’s arm in the new footage; seemingly confirming theories and ideas they’ve been talking about for years.

I think JJ loves us. I mean:
1. Jagged lightsaber
2. Jedi temple guards saber (Look at the animation department for the future of Star Wars)
3. Reylo 4ever
4. Red string of fate
5. Palpatine’s contingency plan
6. The World Between Worlds parallel on the poster (BLOOD SACRIFICE)

Huh. Remember when JJ Abrams was attached to a remake of YOUR NAME, which is full of ‘Red string of fate’ symbolism? #TheRiseOfSkywalker pic.twitter.com/oYWvBf2Q48

Whether or not this comes to mean anything real will have to be seen, but the female Star Wars fans are often on the money when it comes to noticing symbology like this. Let’s hope they get what they want when The Rise of Skywalker hits theaters on December 20.