Robert Wise’s Star Trek: The Motion Picture was released forty years ago today, on December 7th, 1979. And it essentially began the Star Trek franchise as we know it. “But wait!” – you might be yelling at your screen right now – “Star Trek began in 1966!” Yes, the original series aired for three seasons in the sixties, and had a short lived animated revival. But it wasn’t until 1979′ The Motion Picture that Gene Roddenberry’s little cult series really became a money-making cash cow for Paramount. Eventually, of course, these led to several big screen sequels and spin-off television series. The “franchise” part of Trek was truly born with TMP in 1979.

The very expensive-for-its time TMP spent more money for a Trek movie than any subsequent film until J.J. Abrams’ 2009 reboot. Paramount spent so much money, on the state-of-the-art sets, costumes, and models, they needed the most bang for the buck. Luckily, over the course of the next couple of decades, they’d get just that. They’d reuse pieces both large and small, not only big screen sequels, but future TV series. You can see props and sets in The Next Generation, Deep Space Nine, and even Voyager.

Here are the biggest examples of elements The Motion Picture gave us which found new life in future Treks. 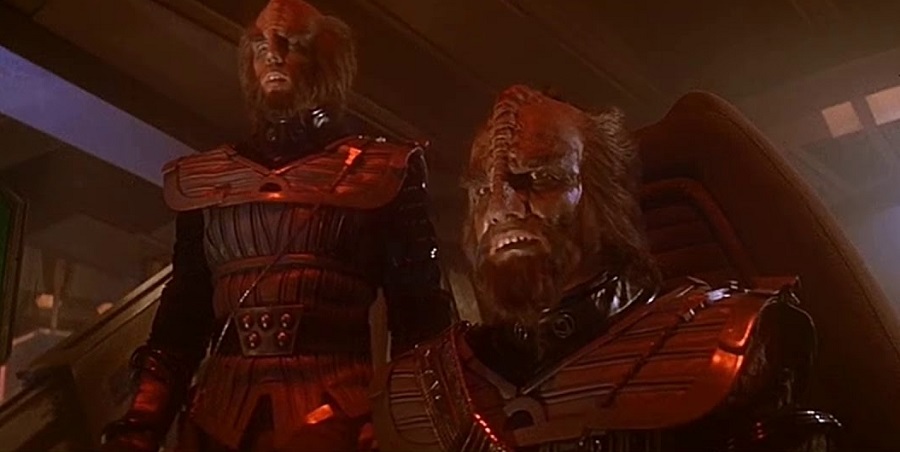 In the original TV series, the Klingons looked less like aliens, and more like very problematic mash-ups of different stereotypes of actual human races. So for TMP, the Klingons finally got an upgrade visually. Not just in their new alien head ridges, but also their uniforms. Designer Robert Fletcher came on board to totally redesign the Klingon warriors. It’s not a lot of screen time, but the whole opening of the movie features the mysterious demise of a Klingon vessel.

The costumes Fletcher designed were only in the movie for a few minutes, but they lived a very long time in Paramount’s wardrobe department. The Klingons wore them again starting in Star Trek III: The Search for Spock, and then later on TNG, DS9, and Voyager. Although designers made new costumes in the TMP style to match the originals, those first Klingon costumes appeared as late as 1999. That’s a full 20 years after the release of the first Star Trek film! 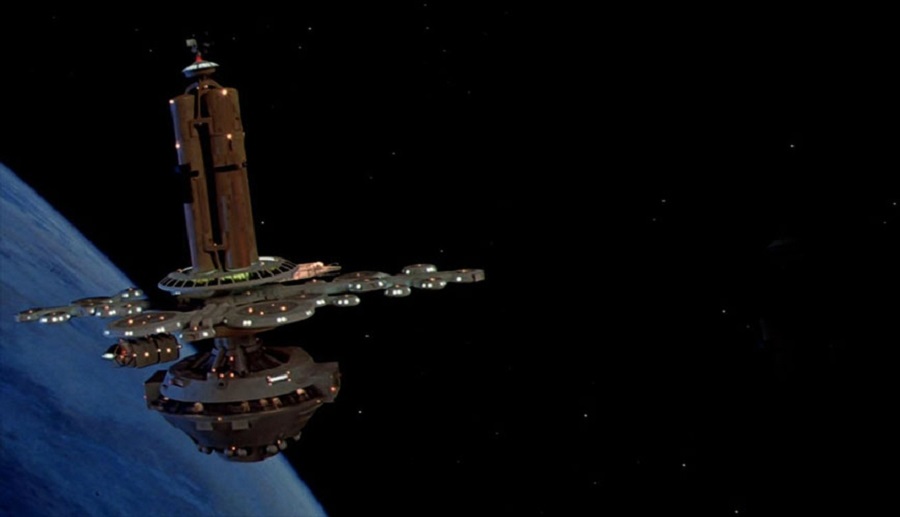 We get our first glimpses of 23rd Century Earth in TMP, including a spiffy new model for Starfleet’s orbital office complex. This was the work of Andrew Probert, who also designed the refit version of the Enterprise. We see this model fairly briefly in the film, but Paramount found ways to extend its shelf life. It was turned upside down and became Space Station Regula 1 for Star Trek II: The Wrath of Khan, and this upside down version became the de-facto Starbase for many episodes of The Next Generation and Deep Space Nine, all the way to the latter series’ end in 1999. Another model created for TMP was the Starfleet drydock, which was used in both series and film all the way until Star Trek: Generations in 1994. 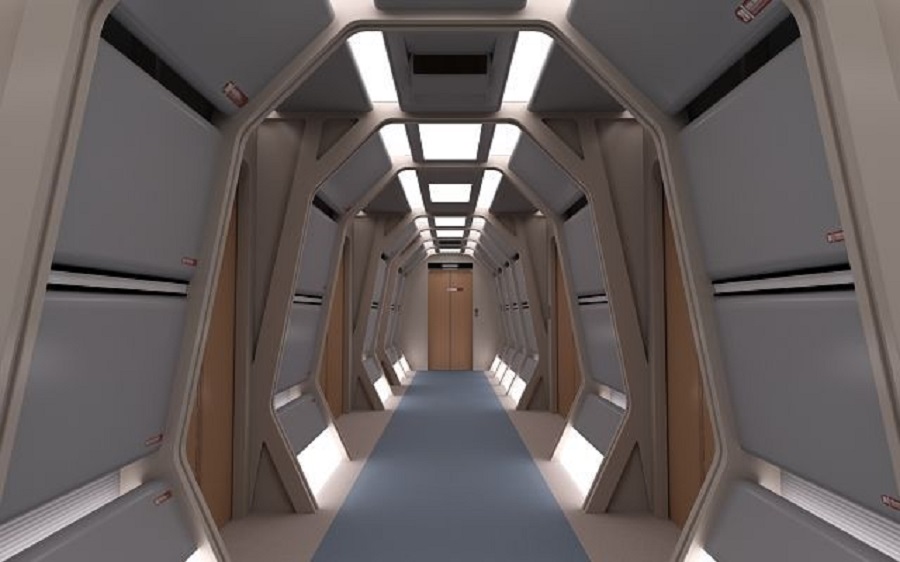 The sets for the interiors of the Starship Enterprise are completely different in TMP. Actually, they began life as interiors for the aborted Star Trek: Phase II TV series. That show became TMP after Star Wars broke box office records. But not only were those sets recycled for the subsequent five Trek features, but for future TV series as well. The corridors of the refit Enterprise were used on TNG as some of the Enterprise-D corridors, and Admiral Kirk’s quarters were used as Data and Worf’s on TNG. Dr. McCoy’s sick bay became Dr. Crusher’s office; parts of TMP‘s sickbay became Engineering on the Enterprise-D.

TNG also reused large chunks of the Enterprise engineering section from TMP. And TMP‘s transporter room received a new coat of paint and became TNG‘s transporter location. The largest and most obvious re-use was the bridge of the refit Enterprise, which became the battle bridge on the Enterprise-D years later. There are around a dozen other smaller examples of how TMP‘s Enterprise got new life over several Trek productions. 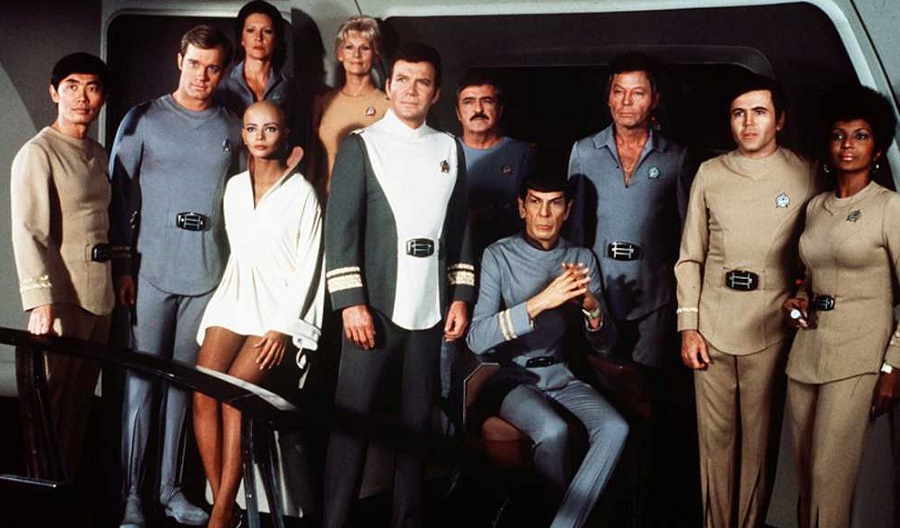 The white, beige, gray, and light blue uniforms from TMP are basically everyone’s least favorite Trek uniform. Captain Kirk’s short sleeved variant makes him look like a space dentist. The muted color palette just looks like it’s trying to mimic Star Wars way too much. The uniforms that in TMP were basically a one-off for this film. Afterwards, they seemingly vanished from all Star Trek.

However, Paramount still found a way to recycle them, even if it’s not obvious to the average viewer. Although new burgundy uniforms Star Trek II introduced new burgundy uniforms for the main cast, the costume department dyed the drab and colorless  TMP uniforms red and re-tailored them for the Starfleet cadets. We saw these in Wrath of Khan, and the subsequent five films. Anytime TNG flashed back to this era, Paramount trotted out those old uniforms as well.

Last but certainly not least, the iconic music. What people commonly call “the Star Trek: The Next Generation theme” was actually Jerry Goldsmith’s main theme for Star Trek: The Motion Picture. Instead of reworking the famous television series theme by Alexander Courage, Robert Wise hired the already legendary Goldsmith to compose an epic new theme for the film. This theme didn’t remain for the next few sequels, but Gene Roddenberry resurrected it for TNG in 1987. That show’s composer, Dennis McCarthy, gave it a new arrangement and the rest is sonic space history.

After Voyager ended in 2001, the old TMP sets, models, and props were mostly put away or finally auctioned off. By the time J.J. Abrams Star Trek started production in 2008, they had all mostly made their way to Sto-vo-kor. (That’s Klingon heaven, by the way.) But the sound stage that housed the TMP Enterprise, as well as TNG‘s, Paramount’s Stage 9? That was where the bridge of the new universe Enterprise was also built, and was where they shot Abrams’ film. And thus, the legacy of Star Trek: The Motion Picture continues to live on. For the Star Trek franchise, it was just the gift that keeps on giving.